WASHINGTON, D.C. — The National Marine Fisheries Service in August released its 2018 annual report on the status of U.S. fisheries to Congress, and the good news is that the total number of stocks on the overfishing list remained near all-time lows and one previously overfished stock was rebuilt. 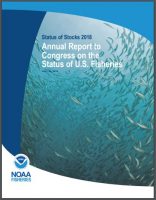 In addition, new information became available last year for several stocks, which resulted in first-time status determinations with only one of the stocks subject to overfishing as well as being overfished.

The bad news, though, is that, “The total number of stocks listed as overfished increased, due to a number of factors, including those outside the control of domestic fisheries management.”

More recently, North Carolina’s fisheries director said neither of the federal lists includes two of the state’s most important species in need of rebuilding.

Understanding the report requires defining terms used by the National Marine Fisheries Service, an office of the National Oceanic and Atmospheric Administration. “Overfishing” means a stock has a harvest rate higher than the rate that produces its maximum sustainable yield, or MSY, which is the goal of U.S. management plans and represents an average long-term catch that can be taken from a stock under prevailing environmental and fishery conditions without damaging it for the future. “Overfished” means a stock has a population size that is too low and jeopardizes the stock’s ability to produce its MSY. “Rebuilt” means a stock was previously overfished and has increased in abundance to the target population size that supports its MSY.

“As a population size,” the report states, “‘overfished’ can be the result of many factors, including overfishing, as well as habitat degradation, pollution, climate change and disease. While overfishing is sometimes the main cause of an overfished stock, these other factors can also play a role and may affect the stock’s ability to rebuild.”

Gulf of Maine smooth skate was the fishery rebuilt in 2018, according to the report, “and the total number of stocks rebuilt since 2000 has increased to 45.”

NOAA, through its system of regional fishery management councils, which regulate waters from 3 to 200 miles offshore in the oceans, assesses 479 stocks or stock complexes in 46 fishery management plans. Stock assessments are the “backbone of effective fisheries management,” according to the report.

According to NOAA, sustainable fisheries, “play an important role in the nation’s economy.” U.S. commercial and recreational saltwater fishing generated more than $212 billion in sales and supported 1.7 million jobs in 2016. “

In North Carolina, both recreational and commercial fishing are important to the economy. The state Department of Environmental Quality’s Division of Marine Fisheries pegged the dock value of all commercial landings, shellfish and finish, at about $77.9 million in 2018. The division doesn’t have a value figure for recreational fishing, although estimates by recreational fishing groups peg related economic activity in the billions per year.

Steve Murphey, director of the fisheries division, said the state is doing a good job managing commercial species – also caught by recreational anglers – for sustainable yield in state waters, out to the 3-mile mark, although he conceded there are “problems and challenges.”

Because of their value, blue crabs and southern flounder, neither of which are on either of NOAA’s lists, are among the biggest problems in the state’s fisheries, Murphey said.

Based on North Carolina’s most recent stock assessment completed earlier this year, the state listed the southern flounder as overfished and undergoing overfishing. As a result, the state Marine Fisheries Commission, the policymaking arm of the fisheries division, on Aug. 23 gave final approval to controversial changes to the state management plan, using commercial and recreational season closures and other measures in an effort to end overfishing and rebuild stocks.

Recreational anglers, effective Sept. 4, weren’t allowed to catch and keep them, and the season won’t reopen until sometime next year at the earliest.

Commercial southern flounder fishermen are under new gear restrictions, and inshore commercial fishermen have a significantly restricted season that won’t start until fall.

In 2018, according to division statistics, southern flounder landings in the state totaled about 903,000 pounds, worth about $3.8 million, making it one of the state’s most valuable catches. But that was down from 1.4 million pounds, worth $5.6 million in 2017.

Murphey said he hopes the restrictions can lead to a recovery of the stock within four to five years, but the “quicker the better.” He said it’s a problem for fishermen, but explained that proper management is essential for the long-term health of the stock and the future of the fishery and the fishermen.

Public comments were accepted until Oct. 3 on Draft Amendment 3 to the state’s Blue Crab Fishery Management Plan, which is also under fisheries commission advisory committee review. The amendment includes several options for achieving the harvest reductions. The Marine Fisheries Commission is scheduled to consider public comment and advisory committee input and select its preferred management measures for departmental and legislative review at its November meeting and give final approval of the amendment in February 2020. Approved management measures will be implemented shortly afterward by proclamation.

Murphey said the crab stock will likely recover more quickly than the southern flounder stock, in part because much of last year’s harvest reduction was because of Hurricane Florence, which ravaged the North Carolina coast in September and halted a lot of harvesting. Landings in 2017 totaled about 18 million pounds but that dropped to about 16.4 million in 2018. Both years, according to division statistics, the value of the harvest topped $17 million.

“I think we should see a return relatively quickly,” Murphey said, referring to expected positive results from management measures on crabs.

Murphey said there are no simple answers when managing fisheries stocks along the entire North Carolina coast.

“It’s tough to explain (restrictions) to fishermen,” he added, noting that management measures had produced results and would continue to do so.

In the federal waters, based on fisheries service 2018 assessments, seven stocks were removed from the overfishing list and five were added, but the status of one stock was previously unknown, according to the report. The additions resulted from stock assessments or data showing catch was too high. Eight stocks were added to the overfished list, of which one stock’s status was previously unknown.

In federal waters off North Carolina, Atlantic bigeye tuna were added to the overfished list, as were Atlantic mackerel from the Gulf of Maine to Hatteras.

In the Mid-Atlantic region, from New England to the North Carolina-Virginia border, summer flounder remained on the overfishing list but were not on the overfished list.

And in the South Atlantic region, from the North Carolina-Virginia border to the tip of Florida, red snapper, Warsaw Grouper, red porgy, snowy grouper, red grouper, hogfish, speckled hind, tilefish and blueline tilefish remained on one or both lists. Red grouper were removed from the overfishing list but remained on the overfished list.

The other species added to or removed from one or both of the federal lists were from the Pacific, Puerto Rico or the Gulf of Mexico.

“By ending overfishing and rebuilding stocks, we are strengthening the value of U.S. fisheries to the economy, our communities, and marine ecosystems and providing sustainable seafood for the nation,” the NOAA report states.

“In 2018, in conjunction with the councils, we reviewed all of our fishery regulations to identify those that should be removed or revised to further reduce regulatory constraints and optimize fishery benefits. As a result, we finalized 10 deregulatory actions that resulted in $695 million in cost-savings,” according to the report.

NOAA’s report adds that, “Many of the stocks added to the overfishing and overfished list have been impacted by environmental factors or international harvest that the United States has limited ability to control.”

The report states that, “The eight stocks added to the 2018 overfished list illustrate numerous challenges inherent in fisheries management. Environmental change, habitat degradation, and international fishing contributed to the status of the eight new overfished stocks.”

The report cites as an example that relatively warm water conditions may be affecting the growth and reproduction of the cold-water Saint Matthew Island blue king crab, which has never been subject to overfishing, and fishing for the crab had been prohibited since 2016.

In addition, the report states that warm ocean conditions had reduced the number of spawning coho salmon returning to their natal rivers, and both Chinook and coho salmon have been impacted by habitat degradation caused by drought and lack of sufficient water for spawning.

The report adds that during the past five years, several of the salmon fisheries were declared fishery disasters “due to factors beyond the control of fishery managers.”

The agency also released in 2018 a new plan to improve the agency’s stock assessments.

Murphy introduces bill to study plan for Oregon Inlet jetties
Support the coastal news you value.CoastalReview.org is an award-winning, nonprofit news service providing unbiased, in-depth and investigative reporting about issues on the North Carolina coast. Your support makes our work possible. Please join the CRO Press Club or put your business in the Sponsor Spotlight to support the coverage your care about. Learn MoreGive or Sponsor