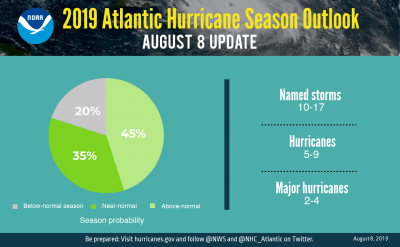 From now through October is considered the peak of hurricane season, and as the El Nino weather pattern in the Pacific gives way to more neutral conditions, forecasters with the National Oceanic and Atmospheric Administration’s Climate Prediction Center have increased the likelihood of an above-normal Atlantic hurricane season to 45%, up from 30% from the outlook issued in May. 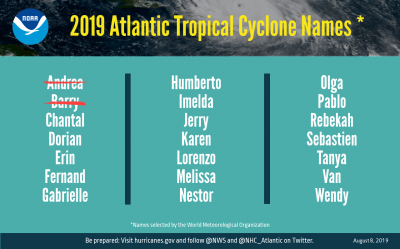 “El Nino typically suppresses Atlantic hurricane activity but now that it’s gone, we could see a busier season ahead,” said Gerry Bell, lead seasonal hurricane forecaster at NOAA’s Climate Prediction Center. “This evolution, combined with the more conducive conditions associated with the ongoing high-activity era for Atlantic hurricanes that began in 1995, increases the likelihood of above-normal activity this year.”

There have been two named storms already during the 2019 Atlantic hurricane season.