RALEIGH – North Carolina is experience drought conditions for the first time since May 2018, the state Department of Environmental Quality announced Thursday. 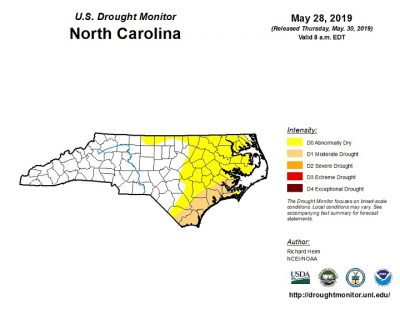 The state drought map, which is updated online every Thursday, shows that 10 southeastern counties have been pushed into a moderate drought because of a lack of adequate rainfall and hot temperatures. Moderate drought, which is the least severe of the four drought categories, stretches from Columbus to Pamlico counties.

There are 30 counties in the eastern and central part of the state that are abnormally dry, which means they are not experiencing drought but could be if dry conditions persist.

The state Drought Management Advisory Council originated in 1992 and began issuing drought advisories in 2003 to provide accurate and consistent information to assist local governments and other water users in taking appropriate drought response actions in specific areas of the state that are exhibiting impending or existing drought conditions, according to the website.

“We are seeing impacts to streams, groundwater levels and inflows to reservoirs across central and eastern North Carolina,” said Klaus Albertin, chairman of the state Drought Management Advisory Council in a statement. “People should follow the water restrictions implemented by their local water system. We are not seeing water supply issues in our reservoirs and streams yet, but water systems are seeing increased demand due to the unseasonably hot and dry conditions. Water restrictions help reduce the risk of water shortages if the current weather pattern continues.”

Drought categories are based on streamflow, groundwater levels, the amount of water stored in reservoirs, soil moisture, the time of year and other relevant factors for assessing the extent and severity of dry conditions.

“Drought conditions have quickly returned to eastern North Carolina due to a high-pressure system persisting off the east coast, locking in above average temperatures and dry conditions,” said Darrian Bertrand of the N.C. State Climate Office in a statement. “This pattern has emerged earlier in the year than is typical, quickly drying out soils. Much of eastern North Carolina is 3-inches below normal in rainfall for the month of May and with another dry week ahead, conditions will likely worsen.”