CHAPEL HILL – The Southern Environmental Law Center announced Tuesday it had filed a lawsuit against the North Carolina Department of Transportation and the Federal Highway Administration challenging their approval of the $500 million proposed Mid-Currituck Bridge. 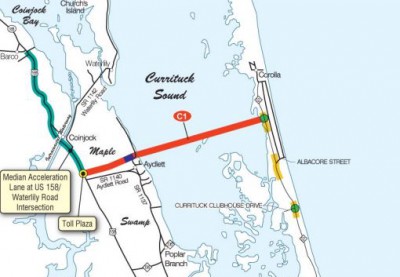 A public meeting is set for 6 p.m. May 2 at the Corolla library in Corolla to discuss the lawsuit.

“It is unfortunate that Governor Cooper’s NCDOT continues to press forward with this wasteful, destructive bridge” said SELC attorney Kym Hunter who is representing the groups, in a statement.  “It’s hard to square the governor’s executive order on climate change with this bridge that will encourage more development in a part of North Carolina vulnerable to rising sea levels and coastal flooding.  Our state would be better served directing those resources to road improvements needed to improve resiliency in Eastern North Carolina.”

The groups filed the lawsuit under the National Environmental Policy Act in the United States District Court for the Eastern District of North Carolina.

The groups argue that the transportation agencies have failed to consider less damaging and less expensive alternatives including a multi-faceted transportation solution for the Northern Outer Banks previously suggested by the groups.

“The proposed bridge would only really be used for 13 weekends a year during peak vacation time” said No MCB co-founder Jen Symonds in a statement.  “$500 million is just too much to spend on vacation traffic when there are so many other needed transportation projects in coastal North Carolina, and so many alternative solutions to deal with the traffic.”

The groups also claim that NCDOT has illegally shut the public out of the decision-making process by not having a public analysis of the bridge and no opportunity for the public to weigh in on options since 2012.

“We are disappointed that NCDOT is pushing forward with this project,” noted Tim Gestwicki with the North Carolina Wildlife Federation.  This unnecessary bridge would devastate one of the most important areas for migratory wildfowl impairing the ability of hunters and anglers to enjoy this unique area.”