RALEIGH – An inventory of greenhouse gases released Thursday by the North Carolina Department of Environmental Quality shows significant reduction in the heat-trapping emissions since 2005. 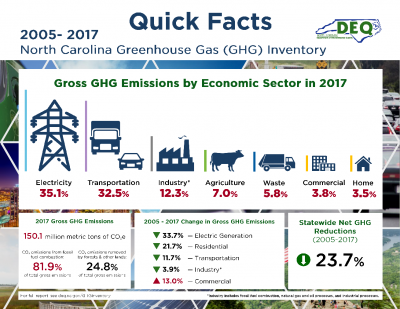 The state Greenhouse Gas Inventory requested by Gov. Roy Cooper’s Executive Order 80 contains an accounting of greenhouse gases from human activity in key source categories from 1990 to 2017, including both emissions and reductions, and projects the state’s greenhouse gas emissions from 2018 to 2030 based on forecast changes in fuel use, land use, population, historical trends and other factors, according to the agency.

“Greenhouse gas emissions trap heat in the atmosphere and are a key factor in climate change. Scientists have found climate change makes weather more erratic, droughts and rainfalls more intense, and storms larger and more powerful,” according to DEQ.

“Clean air and a healthy environment are vital for a strong economy and a healthier future,” Cooper said in a statement. “It is encouraging to see a decline in our state’s greenhouse gas emissions and this inventory helps show us the work we have yet to do.”

In testimony before a congressional committee last week, Cooper said that the state is experiencing the effects of climate change, including back-to-back 500-year floods caused by tropical storms and heat waves that threaten agriculture. A recent U.S. Department of Defense report on climate change also found that two North Carolina military installations, Fort Bragg and Military Ocean Terminal Sunny Point, are at risk for wildfires and recurring flooding.

“This inventory serves as the foundation for key first steps in our efforts to achieve our goals on greenhouse gas reductions. The inventory gives us a clear picture of where we are and how far we need to go,” said DEQ Secretary Michael S. Regan in a statement.