MANTEO — The photography, the interviews, the editing, the theme, everything about Logan Marshall’s second film, “Outer,” shows the touch of a filmmaker who is mastering his craft. The film had its premier July 15 at the Pioneer Theater, with a second showing at the Outer Banks Boarding Co. July 17.

For Marshall, who will be a senior at Manteo High School next year, “Outer“ is his second film. His first, “Limitless,” premiered at the Dare County Arts Council’s Surfalorous last September.

“Limitless“ was a 22-minute short that was very well made. “Outer“ takes on some of those same themes and expands it to an hour-long film. 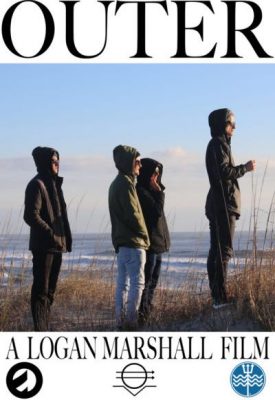 In “Limitless“ and now in “Outer,” Marshall examines an evolving culture in the surf community, but the new film emphasizes the present and how the Outer Banks has become an important East Coast surf destination.

Interviews with Lynn Shell, the founder and owner of Outer Banks Boarding Co., and Jesse Hines, perhaps the most successful professional surfer from the Outer Banks, help to frame the story.

Shell and Hines are focused and knowledgeable about why there is almost always something to surf on the Outer Banks. They discuss the nature of the seabed, with no headlands or permanent reefs, so that conditions are constantly changing. Hines points out that a sandbar with great conditions for two days may not even exist a week later.

It makes finding good waves a challenge, but it also means there is almost always something to ride.

Because of that, there is a native-born surf culture on the Outer Banks with a belief that the best of the local surfers can make it on the pro circuit.

It wasn’t always that way. Shell talks about the conditions that made it possible for a Noah Snyder or Jessie Hines to turn pro. The interviews with Hines especially, talking about what it took to be successful, including overcoming an ill-conceived corrective surgery for a badly broken leg when he was 14, makes the path to what is happening today a fascinating story.

“They were the first pros on the Outer Banks. The younger guys that are my age and younger than me, their entire life they knew you could be a pro surfer here,” Marshall said. “Now it’s a thing. And they’re working toward it.”

“Outer“ is organized as a series of vignettes. An interview or interviews will set up an action sequence.

“I figured with this one I thought it would be kind of cool to spread it out. This way the people who don’t know much about it can get the story line part and then they can watch the surfing. I wanted people who don’t see surfing every day to be able to follow it,” Marshall said.

The action sequences really make this movie soar. The interviews are very good, and they help to create a coherent theme, but the combination of great camera work, excellent editing and wonderful music selection, make the story pop off the screen.

What sets “Outer” apart from so many other surf films is how well the music is synchronized with the cinematography. From the first driving beat of Portland, Oregon composer, Graham Barton’s “Only You Can Save Me,” the music matches the action. Shot on a day of rough surf, the opening sequence has a number of wipeouts; as the heavy, metallic beat of the drum rings through, a surfer goes down.

The action sequences, though, are much more than a documentation of wipeouts.

Some of the scenes are riveting. The segment shot during the March storm of this year are remarkable. Shell mentions the waves look to have at least a 12- tp 15-foot face and watching a body on a surf board shoot down the face of one of those waves, there’s a thought that maybe some were bigger than that.

One of the most riveting sequences filmed that day was Hines on Hatteras Island catching a wave, then disappearing behind a wave closer to shore that filled the screen. Then a head appears, then Jesse, still riding his wave.

And that is what much of “Outer“ highlights — the amazing skill of local surfers.

If Jesse Hines represents the first wave of Outer Banks pro surfers, coming up next are Quentin Turko, who spoke of always dreaming of riding the biggest waves and how it makes him feel. Or Bo Raynor, who may be the next Jesse Hines or Noah Snyder riding out of the Outer Banks.

On the water he is fascinating to watch. There is power and elegance to his style, a subtle difference that makes him stand out, a difference that Hines noted in one of his interviews.

“Outer“ is certainly a surf film, but it manages to occupy a space that is more than that. Ultimately it is about a way of life and an evolving culture.

The next scheduled showing on the Outer Banks will be during the Dare County Arts Council’s Surfalorous, which begins on Sept. 20.