The Sea Grant Oil Spill Science Outreach Program’s latest publication, “Deepwater Horizon: Where did the oil go?” summarizes what researchers have discovered about where the spilled oil traveled after it escaped from the Macondo well in the Gulf of Mexico and what processes carried it along its path. 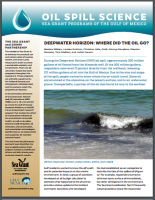 The Deepwater Horizon oil spill released around 172 million gallons of crude oil into the Gulf in 2010. In the following months, responders worked to remove what they could from the environment. Simultaneously, scientists worked to track the path of what remained.

The publication highlights some of the ways responders successfully removed a portion of the oil after it escaped from the Macondo well, including skimming and burning it at the surface, according to Louisiana Sea Grant.

The publication also discusses the  places scientists located oil, from marshes and beaches at the shoreline, in a many-miles-long underwater plume, and even on the Gulf floor, and how they think it got there.