BOGUE BANKS — After a day of strong gusty southwest winds, the ocean was now soothed by a mild northerly wind. No longer agitated, it lay as calm and flat as an aqua blanket stretching to the cloudless horizon. Large clumps of sea foam were scattered up and down the beach, pushed by the cool breeze as if they were alive and capable of running on invisible feet. As I walked the beach under the golden glow of a rising sun, my feet crunched over the bits and pieces of mollusk shells crushed and broken by the churning waves.

Among the shattered sea shell parts were the remains of other ocean creatures, especially different species of crabs. I suspected that the crabs washed up more or less whole and were then picked apart by the satiated-looking herring gulls that loitered nearby on the sand. I then came across the complete carcass of a small blue crab that appeared to be lifeless and cradled it in the palm of my hand. As I examined it, it slowly raised a claw as if to say “I’m not done yet.” Placing the creature back into the calm waters, a childhood memory flooded into my mind.

While wading in the ocean surf as a young boy, I suddenly felt a sharp pain on the big toe of my right foot. Slowly raising my foot out of the water I expected to see it sliced open by a broken bottle. Instead, the claw of a huge blue crab was tightly wrapped around the digit refusing to let go after a vigorous shaking of the foot. I had to hop to shore as if on a pogo stick where I squirmed in the sand like a worm on dry pavement. After enjoying my state of discomfort, one of my brothers eventually pried open the claw to relieve me from my tormentor.

Blue crabs, notorious for their nasty temperament, are an animal species known as decapod crustaceans. These are the mainly aquatic animals that have an exoskeleton made out of chitin and calcium carbonate. They have five pairs of appendages with the first pair usually being a formidable type of claw or pincher. The main large feature of their body is the head and thorax which is protected by the hard and rigid carapace commonly referred to as the shell. They have compound eyes positioned on long stalks that project like periscopes when they are hiding in the sand or mud.

Most people are familiar with the blue crab as a tasty menu item at any seafood restaurant. They are the backbone of the commercial seafood industry with average landings of 27 million pounds valued at 26 million dollars. But blue crabs aren’t the only fish, uh … crab, in the sea.

Park rangers at our ocean and estuarine state parks have been formally documenting all coastal species for many years. For more than 20 years, Fort Macon State Park superintendent Randy Newman has been scouring the beaches, dunes and waters of the 423-acre park listing every animal and plant that he can find. An expert naturalist, Newman has not shied away from also discovering what lurks in the ocean, inlet and sound waters that surround the park. He has found the familiar species, but also discovered even more species that most of us have never heard of or will ever see.

But Newman has had some help adding to his list. Elliott Coues, an Army doctor stationed at Fort Macon in 1870, was an avid naturalist that prepared an inventory list of crustaceans as well.

Newman was able to track down a copy of Coues’ writings, “Notes on the Natural History of Fort Macon,” and add species to the list. He has also been able to find references and add species from the works of other biologists including scientists working in 1939 with the Smithsonian Department of Invertebrate of Zoology.

More than 50 species of crabs have been found at Fort Macon and they represent species that you would typically expect to find along our entire coast.

Hermit crabs are the interesting-looking creatures that live in the cavity of gastropod mollusk shells. Even though they are crustaceans, they are not true crabs because they are soft-bodied and don’t possess a protective shell. That is why they live inside the protective amour of a seashell. Even though we collectively call them all hermit crabs, there are at least six species off the waters of our state parks. Most common, is the striped, but we also have the dwarf, banded, flat-clawed, clam shell and giant red hermit crabs.

Along the edges of our marshes, it is easy to find the semi-terrestrial fiddler crabs. Sand, mud and brackish water fiddler crabs can be found in their so-named habitats. The male of these species is known for its large fiddle-shaped claw that it waves about to attract females or threaten other males.

Coues noted in his writings his experience with the tiny fiddler crab, “The great claw of the larger individuals is sufficiently strong to bring blood from the finger.”

Large groups of fiddler crabs seen at low tide in the marsh are referred to as a cast of crabs.

Most crabs use their legs for walking, however one family of crabs is adapted for swimming. The fifth pairs of legs on speckled, lady and blue crabs are flattened and used like paddles. Along with their thin, streamlined shell they are able to propel quickly and pugnaciously through the water in search of prey.

Other species of swimming crabs are the iridescent, flat-surface, plain lady and Pacific. The Pacific crab is a rare intruder to the mid-Atlantic coast, most likely being deposited into our waters through the bilge water of foreign ships.

Out in the estuaries, a number of crab species rely on the oyster reef community for food and protection. Spider crabs, known for their long spider-like legs, are masters at camouflaging themselves among the oyster shells. These crabs will decorate themselves with algae to blend in with their surroundings. Some will even attach live sea anemones on their shells to ward off predators with their stinging tentacles.

The oysters themselves host a species of crab that lives inside their shell. The oyster pea crab lives completely inside the oyster shell that provides them with food and safety. They are called a kleptoparasites, because they rob food from the oyster, interfering with its ability to feed.

One of our most colorful crabs is the calico crab that is also referred to as the leopard crab due to large red spots on the pale yellow shell. These crabs are scavengers that feed on the bits and pieces of decaying plants and animals. It is rivaled in beauty by the purse crab, a small crab with a rounded carapace and delicate legs. With a good imagination, the shape of the shell is said to resemble that of a purse.

The biggest bruiser of a crab in our area is the stone crab. Their shell can get up to seven inches wide and is protected with fat boxing glove-like claws. The claw has one movable finger and an immovable palm that can crush and cut into oysters and other mollusks. Like all crabs they must molt as they grow. After molting, their shell is soft, rendering them vulnerable to predators. To avoid detection while molting they usually shed their old shell under the darkness of night. If the molting process starts during the day, they can excrete a hormone from their eyestalk that halts the molting progress until it is dark again.

Having all these crabs in our coastal waters is a good thing. The diversity of these crab species is a good indicator of a healthy ecosystem, even if we get our feet pinched once in a while. 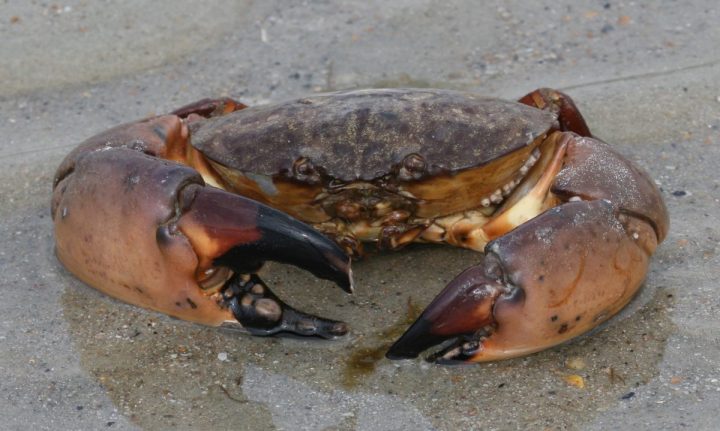 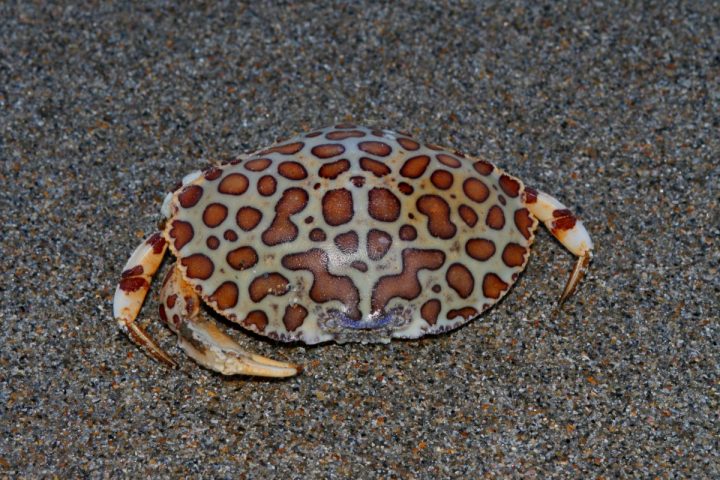 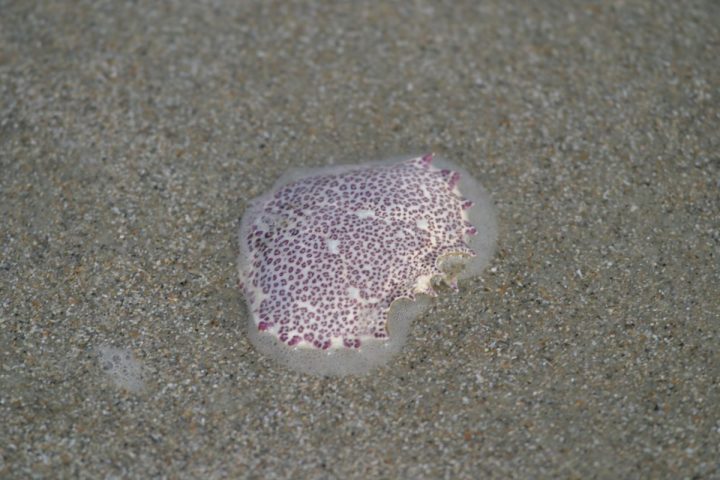 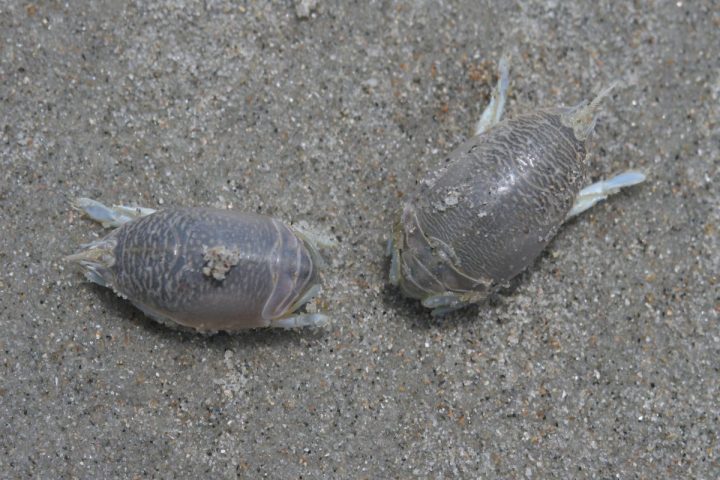 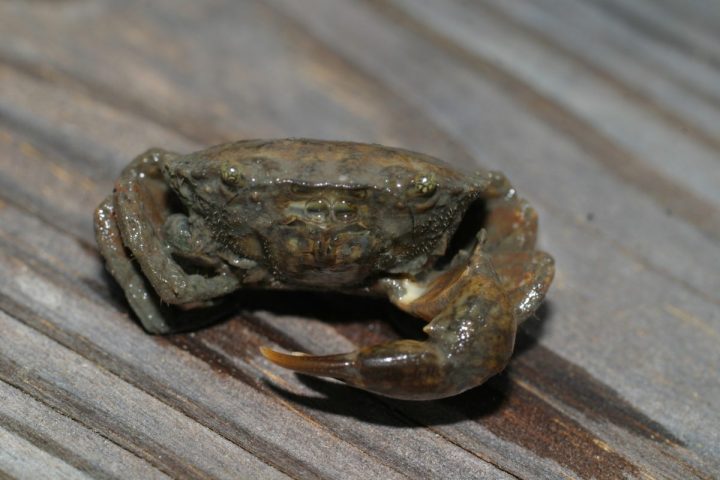 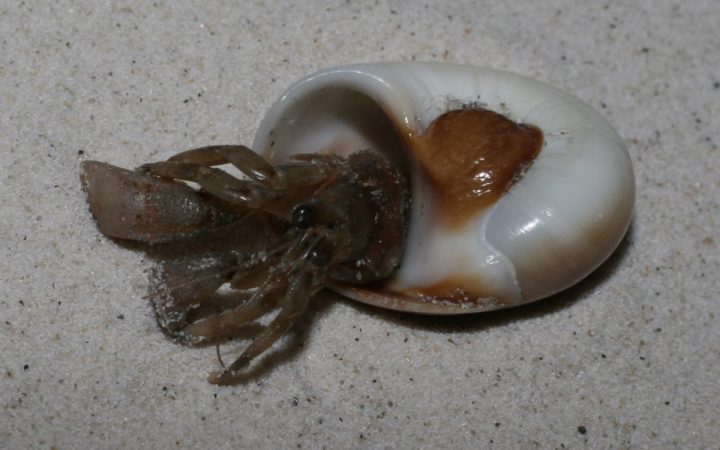 A flat-clawed hermit crab peeks out from its shell. Photo: Sam Bland 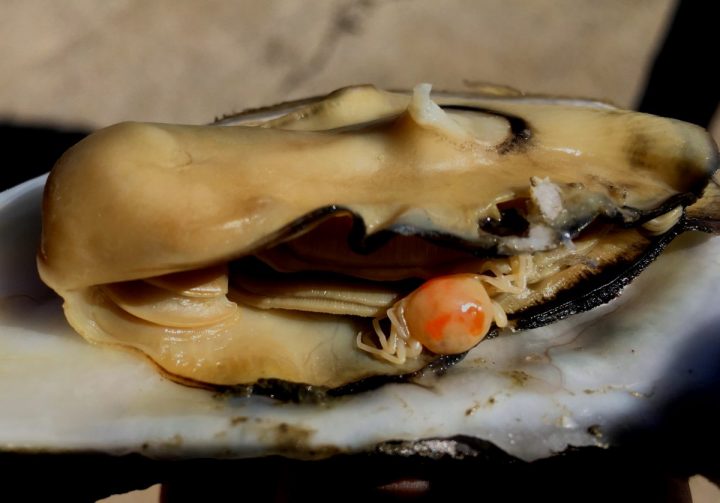 A pea crab as found inside an oyster. Photo: Rachel Bisesi 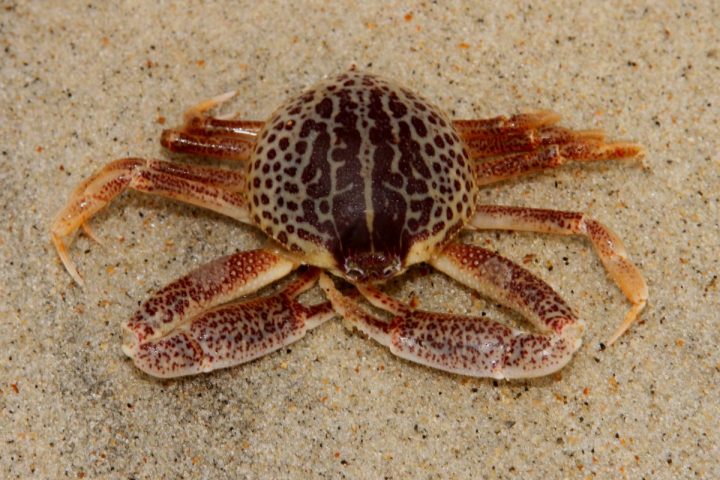 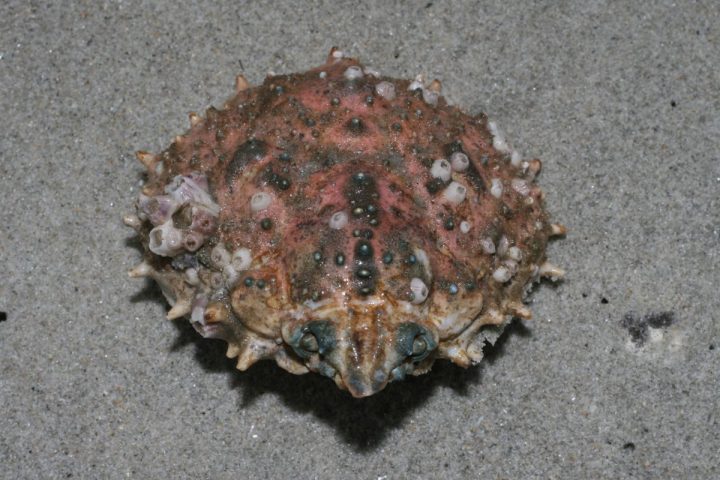 A day on the water: Spring trout fishing continues in April

On current trajectory, NC won’t meet climate goals
Support the coastal news you value.CoastalReview.org is an award-winning, nonprofit news service providing unbiased, in-depth and investigative reporting about issues on the North Carolina coast. Your support makes our work possible. Please join the CRO Press Club or put your business in the Sponsor Spotlight to support the coverage your care about. Learn MoreGive or Sponsor