If you’ve ever wondered exactly what kind of wildlife exists in your backyard, a statewide photography project could help you discover those curious creatures living nearby.

Candid Critters, a collaboration between North Carolina Wildlife Resources, the North Carolina Museum of Natural Sciences and North Carolina State University, is hoping to get people more interested in the wildlife around them by providing trail cameras, or camera traps, to help survey wildlife across the state.

The project kicked off in December in the eastern part of the state and is expanding March 1 to include all 100 counties of North Carolina with a goal of surveying 20,000-30,000 sites over the next three years.

Arielle Parsons with the Museum of Natural Sciences said the project is open to anyone living in or owning property in the state who is willing to run a camera trap. Volunteers use trail cameras on loan from one of nearly three dozen participating public libraries, or they can run their own trail camera if it meets the necessary criteria. And cameras can be set up on the volunteer’s property or at participating state parks and wildlife refuges.

Candid Critters is also geared toward students and can be used in the classroom with lesson plans that are available for all age groups.

“Basically, anyone who wants to participate – there’s no age or education or any limitation on people that are able to participate in this,” Parsons said. “We provide cameras that we are lending out through public libraries across the state that people can then borrow to run and help us complete this (camera-trapping) survey.”

She said if the project is successful, Candid Critters will be “an unprecedentedly large camera trapping survey.”

“We’re really hoping to cover every corner of every county in the state,” Parsons said.

Roland Kays, a professor with N.C. State and the Museum of Natural Sciences, is the creator of the software, database and website – called eMammal – used to manage all the photos taken and uploaded from camera traps, all of which gets saved at the Smithsonian.

In addition to getting people more engaged with the outdoors, he said the project will help answer some scientific questions about the state’s wildlife to better manage and conserve them.

“By documenting the animals at all these different points, we’ll learn a lot about all these different species,” Kays said. “We’re particularly interested in looking at relationships between deer and coyotes. We’re interested in documenting the expanding elk population in the western part of the state. It seems like the red wolf population in the eastern part of the state might be declining, so we want to monitor that and see, do the coyotes increase, for example, in the absence of the wolf? So, there’s dozens of questions we’ll be able to get at with this data.”

Palamar explained that the Wildlife Resources Commission is specifically interested in seeing how coyotes are distributed throughout the state and how their use of land overlaps with deer.

“Also, we are trying to understand the question of fawn recruitment. We’re going to do that with concentrated efforts throughout different parts of the state where we’re actually looking at the fawn-to-doe ratio,” she said. “So, how many fawns are with each doe in those pictures? Say (for example) most does in the Piedmont have two fawns but in the mountains they have one fawn with them at a time. All of that is going to help us understand our deer population and how it’s growing and moving throughout the state.”

“We’re actually hoping the kids in the schools and the public in general are going to come up with very interesting management-oriented questions that they are going to be able to answer with (the camera-trap images),” she said. “Maybe something we have not thought of or maybe something that we don’t think is as important to the public, but the public comes to us and says, ‘Hey, this is important to us. We see that you could answer some of these questions with this data we are providing to you.’

“Hopefully this is going to increase people’s understanding of how you do science, and they are going to start asking the scientific questions and see that they can answer them with the data.”

“One of our goals as researchers here at the museum is to turn this citizen-science into actual peer-reviewed publications that contribute to the body of scientific literature,” she said. “So we’re not just doing this as a hobby, we consider this to be real science, and we can share that (data) with the scientific public.

“So far, all of our projects that we’ve done with citizen-science camera-trapping has resulted in multiple peer-reviewed scientific publications. We really like that aspect of this, and it become a great partnership between the citizen-scientists and ourselves and so it’s really beneficial in that way.”

So, how does one become a citizen-scientist camera-trapper for Candid Critters? The first step is to visit nccandidcritters.org to sign up and complete the online training, which takes about 45 minutes. From there, volunteers pick up a camera from the nearest participating library, which are listed on the website, and choose a location to set it up.

“We want the camera to run for three weeks (at a time), but we ask that people check it out for a season – three months, spring, summer, fall, etc.,” Kays said. “So, hopefully, they’ll run it in three different places … If they’re into it and they want to keep going and do it for a year, that would be great. We’ve got special T-shirts to give for running a camera for a year.”

Kays said the software used to upload and identify animals is user-friendly and complete with shortcuts for common animals.

“Once they’ve gone through (all the photos), they hit upload and they send them to us, and then we go through and double check everything,” he said. “They’ll get a response back that gives a summary of what they found, and we’ll tell them what they got right and what they got wrong so they can get better in the future.”

Since December, more than 270 people have signed up to participate and 110 camera “deployments” have been uploaded. The images and data are all available at nccandidcritters.org.

“We want to make sure that people know that foxes and squirrels and coyotes, they’re everywhere – they’re well distributed throughout our state and there are so many that you don’t see,” Palamar said. “But this camera can capture it for you, and that you would later be able to see the same path where you were walking your dog that morning is used at night by this bobcat. And it’s fine – you’ve never seen that bobcat before and now with this camera you can see that he actually is using the same path that you are using and that you guys are coexisting well.” 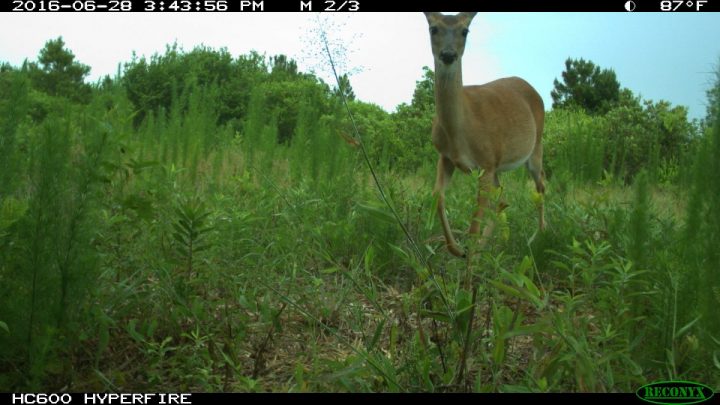 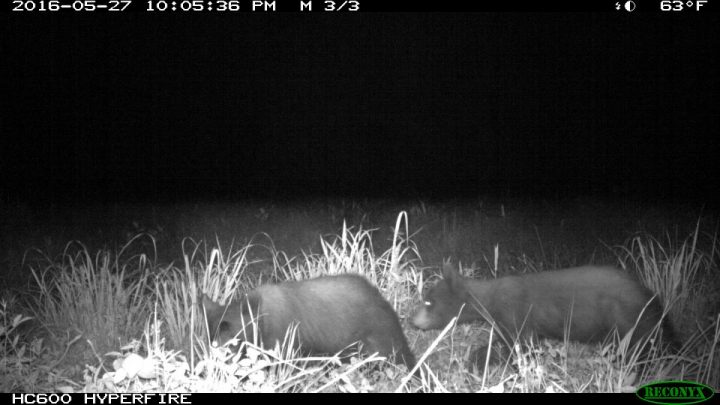 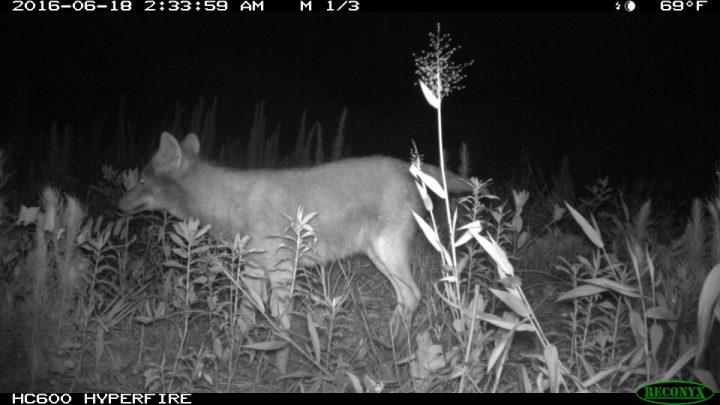 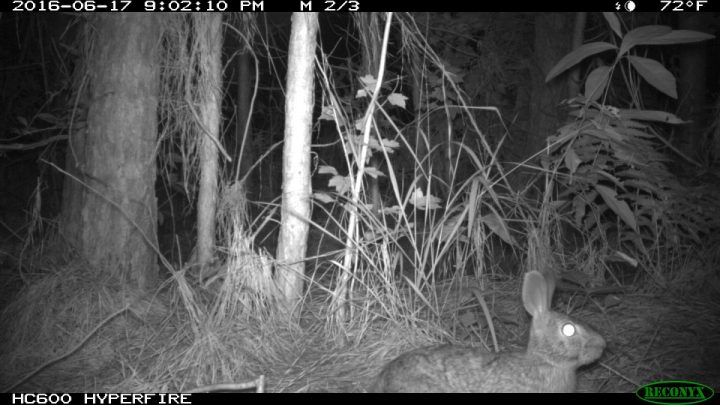 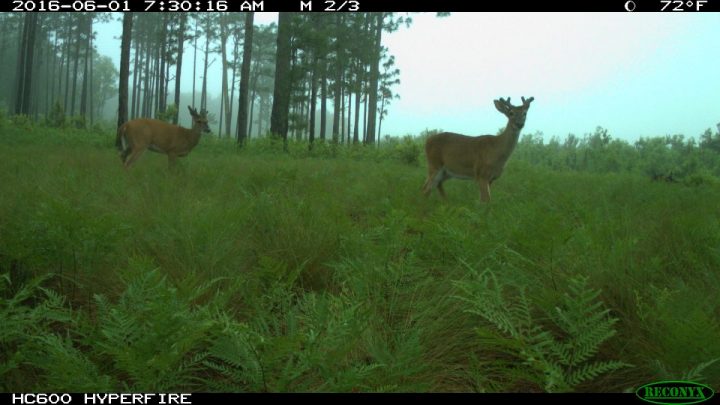 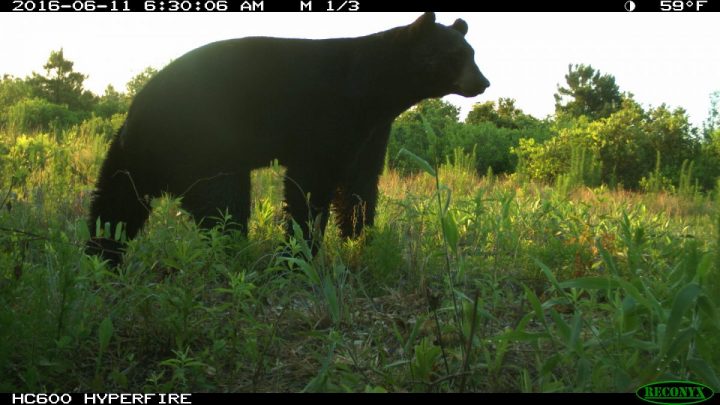 A black bear is captured in this image from Jones County. Photo: N.C. Candid Critters

Lori Wynn is a freelance writer and editor who grew up on Ocracoke Island. After obtaining a bachelor’s degree in journalism in Memphis, Tennessee, Lori returned to Eastern North Carolina, where she was a reporter for the Carteret County News-Times, covering Beaufort and county government, the North Carolina General Assembly and more. Lori later worked as the editor of the Bryan County News, a community newspaper in coastal Georgia, for four years. She now lives in Savannah, Georgia, with her husband and two daughters.