ELIZABETH CITY   Energy and food producers are not often so simpatico when sharing the same turf, nor are farmers always so pleased about big corporations co-opting their land.

But at a July 17 open house at Amazon Wind Farm U.S. East, North Carolina’s first land-based wind farm, farmers extolled fat monthly lease checks, millions of dollars in economic investment and a windfall in local tax revenue collected from developers while they pretty much go about farming as usual.

“This seems to be the best of both worlds,” Joe Winslow, chairman of the Pasquotank County Board of Commissioners, said, the sun glinting off a sleek rotor blade lying on the ground behind him.  “You can farm around it and yet you can produce power.”

Winslow said he and other county officials spent about a year researching wind farms – talking, traveling, reading, interviewing, inspecting – before deciding to move forward with the project.  And all signs, he said, point to it being the right move.

The county is already reaping financial awards from the project, he said. Although there has been some opposition to the project, most of it came late in the process from people outside the area. 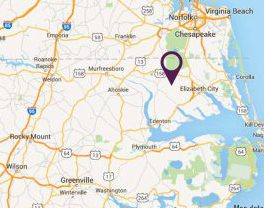 “The local people support it,” he said “It’s a very positive thing for the area. It’s helped our local economy tremendously.”

Already, the project has put $2 million into local businesses, Winslow said, not including hotel occupancy rates last winter that went from the usual 15 percent or so to 97 percent.

“The thing that intrigued me about it – because it is an intrusion onto your property – I’m retired and I definitely needed the income,” said Henry Winslow, one of 75 landowners and others affiliated with the project who attended the open house to sign a rotor blade as a symbolic stamp of approval. He’s not related to  Joe Winslow.

The trade-off is having dozens of wind turbines planted for at least 25 years among fields of wheat, corn, rapeseed and soybeans, each reaching 492 feet into the sky when the tip of the blade is straight up.

Four cylinders are stacked on top of each other, towering to 305 feet. A rectangular cell then tops the cylinders, and the rotor, or nose cone, it placed on the top.  Finally, the 182-foot white fiberglass rotor blade is installed on the rotor.

“I’m not against oil or any other energy,” Winslow, 67, said, explaining why he’s a fan of wind power. “I like it because it’s quiet and it’s clean.”

For each of the six turbines that will be erected on his property, he will be paid $6,000 a year. Each tower requires an acre of land.

And there is another big benefit from the project.

“Excellent roads,” Winslow said. “They’ll keep me out of the mud.”

Since the groundbreaking last July on 22,000 acres of farmland straddling Pasquotank and Perquimans counties, about 60 miles of hard-packed dirt roads have been carved through the fields, and staging areas have been constructed. The project’s first phase will include 104 wind turbines that generate up to 208 megawatts of electricity, enough to power more than 61,000 homes.

The electricity will be sold to online retail giant Amazon to power current and future cloud data centers.  Paul Copleman is a spokesman for Portland, Oregon-based developer Avangrid Renewables, until recently known as Iberdrola Renewables. He said that there are about 60 different leases involved in the project, ranging from multiple turbines to a construction easement.  All are for at least 25 years.  Between the two counties, he said, tax revenue totals about $520,000 annually, and it will increase each year.

Typically, the investment in a project the size of Amazon Wind would be $375 million, Copleman said. That figure more accurately accounts for industry standards than previously-stated cost estimates, he added.

All the components for the third turbine were at the site on the day of the blade-signing, ready to be erected.  Several trucks were lined up elsewhere along the dirt roads, waiting to drop off loads of cylinders or blades. The rate of assembly and installation is “obviously a coordinated dance,” Copleman said, that is influenced by delivery times, weather and other factors.

“We’ll start to ramp up the pace,” he said. “We’ll be doing a few a week, once the components are on site.”

Commercial operation of the windfarm is expected to start by year’s end, Copleman said.

From the edge of the road near where the open house was held, looking toward the distant horizon over vast fields of corn, two white wind turbines could barely be seen poking into the sky. But from U.S. 17 outside Elizabeth City, the turbines are easy for drivers to see.

As the site first utility-size wind project in the state, the county has led the way for others in the region, said Joe Winslow, Pasquotank’s commission chairman.  When Amazon agreed to buy the power, the project suddenly attracted tons of attention for the area, he said, making the rural counties benefactors in the growing national trend of tech giants, such as Amazon and Google, that purchase renewable energy.

Winslow said one reason the area became attractive was because Ohio recently put new regulations in place that made wind power development less attractive.  The developers then looked to North Carolina.

Steve Harris, an Elizabeth City native who has farmed for 30 years, said he first heard about the project about eight years ago, when he received a post card inviting him to meet with company representatives. Today, he is leasing land for 11 turbines.

“Ironically,” he said, “we always joked back here when we were farming, we always said it would be good for a wind farm.”

Being able to farm around the turbines, Harris said, makes the wind technology much more attractive to farmers than solar farms, which cover land.  “I think they look pretty neat, myself,” he said. “They’re going to be spread out.”

Apex Clean Energy is currently seeking conditional use permits to build a 105-turbine windfarm called Timbermill Wind on timber and farm land in Perquimans and Chowan counties. The Chowan County Planning Board last week voted 3-2 to recommend approval of the project to the Board of Commissioners, according to Apex spokesman Kevin Chandler.  He said that Apex’s application exceeds the counties’ minimum requirements for sound, shadow flicker and setbacks in their ordinances.

Chandler said it is not possible at this point to say what fees landowners would be paid.

For James White, the Amazon Wind Farm made sense from the time he first heard about it 10 years ago. White, whose family farms 220 acres and has 25 acres of pasture for 65 cattle, said he was one of the first farmers approached by Iberdrola and he was immediately onboard.

“I thought it was like a pipe dream then, because there was nothing like that at the time,” he said. “Knowing how around here, they don’t really like progress, I never thought it would materialize.”

He is leasing land for two turbines, and a 17-acre block for two substations.

White said he doesn’t understand the anger some have had toward the project and similar wind farms.

“It’s good for the environment,” White said. “I think they’re beautiful. They’re just majestic. I think after a while people in the community aren’t going to notice them. After a while, it’s going to be part of the normal landscape, just like cell towers.”