The Perseid meteor shower is visible from July 17 to Aug. 24 but will peak between Aug. 9 and 14. The Perseid is renowned for producing up to 60 meteors an hour, but some experts think this might be an exceptional year with double the rate of meteors.

They are best viewed after midnight. Shooting stars can appear anywhere in the sky, but these meteors will appear to come from the constellation Perseus, which will rise in the northeast just after 10 p.m. on Aug. 9.

August will begin with Jupiter, Mars, Saturn, Venus and Mercury visible in the evening skies.

Look for Mercury and Venus near the western horizon just after sunset. Venus is the brighter of the two and will be a little closer to the horizon. Mercury will be a little higher and farther south — to your left.

Don’t confuse Mercury with the fainter star, Regulus. Regulus is the 21st brightest star in the night skies. It’s the brightest star in the constellation Leo and has been called the “Heart of the Lion.” Regulus appeared last night between Venus and Mercury. The three will appeared to form a line that points up to Jupiter.

If you haven’t taken the time to view Jupiter this year, now’s your last chance until October. It will get closer to the horizon every evening. By the end of August, Jupiter will not be visible in the evening skies.

Neptune has a visual magnitude of +7.9, making it invisible to the unaided eye. But you can view it through a good pair of binoculars. It will appear to be a very bright star. Uranus on the other hand has a visual magnitude of +5.9. That means on a very clear dark night, you might be able to see it without binoculars or a telescope. Pick a place far from light sources. 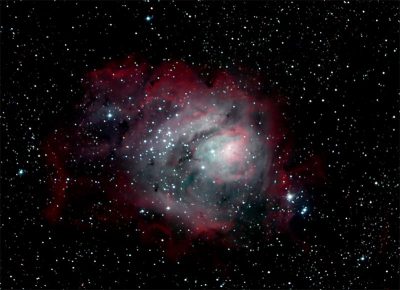 The Lagoon Nebula is about 4.3 thousand light years away. Its visual magnitude is +6. That makes it very difficult to see with the unaided eye. M8 can be found with a pair of binoculars or a telescope in our southern skies throughout July.