OCRACOKE — A stiff wind skittered across the Pamlico Sound, splashing water across the bow of the 17-foot Carolina Skiff as it plowed into a wave and bounced back up. I clutched the side, holding on for dear life and hoping we’d reach our destination soon. The captain, a suntanned woman, proclaimed that “this isn’t too bad. I’ve seen worse.” I was grateful when 15 minutes later we slowed down and she announced that we were there.

Gazing ahead, I saw an amazing array of stakes, bags and cages spread out across the water. We were approaching the Devil Shoals Oyster Farm, an aquaculture business owned and operated by two Ocracoke women, Heather O’Neal and the captain, who prefers to remain anonymous. I will call her Lady Anon.

O’Neal was already at work, thigh high in water, emptying cages into a bucket with her son. Her husband, Fletcher, and three of their children, including four-year-old Maranda, for whom their boat is named, were in the boat culling under-sized oysters and setting aside the legal ones to keep. Fletcher, who works for the state ferry system, has only recently returned to the water after a year of dialysis and a kidney transplant. Everyone seemed to be enjoying themselves. 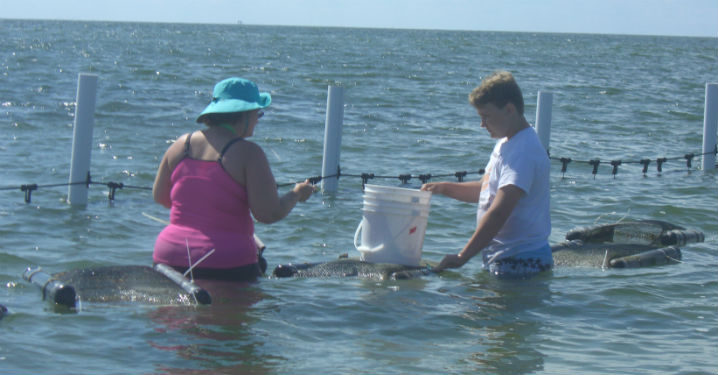 The farm is part of a five-acre lease that Lady Anon began working in 1998. She had been interested in and researching oyster farming for years when Hurricane Arthur destroyed most of her clam beds in 2014. Cultivated oysters, she had learned, matured much faster than clams and could be harvested in a year or less, providing a quicker return on the investment. While she replanted her clam beds, she would have to wait several years before harvesting them.

The O’Neals had been buying Lady Anon’s clams for their restaurant, Captain Puddle Duck’s Seafood Steamer Pots. Heather already had a dealer’s license and Fletcher had a commercial fishing license. Upon reaching a decision to expand to oysters, Lady Anon invited them to join her, and they became a team.

They visited several oyster farms and talked to aquaculture experts at North Carolina State University and The University of North Carolina at Wilmington. Chuck Weirich, the aquaculturist from North Carolina Sea Grant, visited them and assisted with ideas and start-up equipment. The two women, with the help and advice of county commissioner Bill Rich, received a $15,000 revolving loan from Hyde County, which had received a Golden Leaf Foundation grant for business loans.

They started with 100,000 hybrid oyster spat, or seed oysters, in the summer and later in the fall of 2015. They had placed them in in plastic mesh “nursery bags,” 5,000 per bag. After three or four weeks they were moved and gradually dispersed into “grow-out cages,” 250 to 300 per cage. The bags are attached to rope that is suspended across the lease. They have to be kept clean of sea grass and algae, so that sunlight can get to the oysters. The team culls the oysters and moves them as they grow larger, until they are ready for harvest when they reach legal size. Oyster farming is still new and experimental, and at Devil Shoal three different methods are being tried.

The oysters Lady Anon and the O’Neals are raising are sterile hybrids, which grow quickly and, because they do not spawn, can be eaten all year. Known as triploids, they were bred from native diploid and monoloid oysters.  In the summer months, when regular oysters are flavorless and mushy, triploid oysters remain firm, full and sweet.

Triploids are produced at spawning by a process that causes the egg to contribute two sets of chromosomes and the sperm one set, according to experts at Coast Seafoods Co. Hatchery, a supplier of farmed shellfish. Triploid oysters can occur naturally, but they are rare.

Wild oysters have traditionally played an important role in eastern North Carolina’s marine ecosystem. They filter and clean the water as they feed and provide important habitat for many marine species. Known to scientists as Crassostrea virginica, these marine mollusks are free-floating in their larval stage, but once they attach to a bottom they develop into spat and stay put. When attached to one another they form huge congregates known as oyster reefs, where crabs, small fish, tube worms and other marine animals make their homes.

Oysters have been, until recently, prolific in the waters surrounding Ocracoke Island. Gene Balance, an Ocracoke fisherman and shellfish researcher, says his his grandfather, Elisha Ballance, oystered as his main source of income in the winter. He and other Ocracoke fishermen sailed their skiffs into Pamlico Sound and gathered the oysters using hand-held tongs. They sold them to what were called “buy boats,” which delivered the shellfish to New Bern and Washington, North Carolina.

In recent years, however, oyster reefs have suffered dramatic declines and now occupy only a fraction of their former territory. This oysters produced at this farm do not form reefs, but they do fulfill another need; that of those people who love to dine on oysters, and for the restaurants that serve them.

“We wanted people to have access to fresh local seafood,” Heather explained. “The wild oysters don’t seem to be doing so well, and there aren’t enough out there. The oysters we are raising tend to take on the taste of the waters where they grow, so they have the flavor for which Ocracoke oysters are famous.”

The idea of raising oysters is not a new one. W.K. Brooks of John Hopkins University extolled the possibilities in a document that was read before the Fishermen’s Convention in Raleigh in October 1884. He wrote that “Here then is the opportunity of North Carolina. In her great land-locked sounds and tidal rivers there is a great undeveloped source of wealth … oyster farming … the possible revenue from this source is so great as to seem almost fabulous …

Troy Alphin, who works out of UNC Wilmington today, also believes in the possibilities. He works with potential oyster growers to help them select productive oyster-growing sites and navigate through the rules and regulations.

“North Carolina is a public trust state, so the water, from the high tide line down, belongs to the public. But in order to grow oysters on an oyster farm, you have to get a lease and rights to manage that piece of property,” Alphin said. ”

The permitting, he explained, is handled by the state Division of Marine Fisheries. Some people need permits to lease the bottom and others lease the actual water column lease if they suspend the oysters in cages.

“We have the space and we have the water quality in a lot of areas, so we could potentially grow this industry by leaps and bounds over the next decade,” Alphin said.

Jay Daniels, owner of Bodie Island Oysters on Roanoke Sound, in a 2014 interview for Coast Watch, remarked that “North Carolina has the second-largest estuarine system in the country, but produces less than one percent of its cultured oysters.” He is hoping to see that change.

The team of oyster farmers working at Devil Shoals is as interesting as their business. Lady Anon gave up an office job in the northeast 40 years ago and moved to Ocracoke, where she went to work on the water. She has worked on trawlers and crabbed and fished, but clamming has been her mainstay. She raised two daughters in the meantime and has been assisting in oyster restoration experiments with the state. She is a member of the Ocracoke Working Watermen’s Association.

Heather O’Neal, 42, of Engelhard came to Ocracoke to work at the state ferry. She met Fletcher O’Neal, an Ocracoke native, and they were married and now have five children. She works at Ocracoke School and has, with her husband, been operating their Captain Puddle Ducks business for six seasons.

Now, on this balmy day in early May, many of the oysters are ready, and the restaurants are already waiting for them. They will be delivered tonight, and restaurant diners will enjoy fresh oysters straight from the water to the plate.