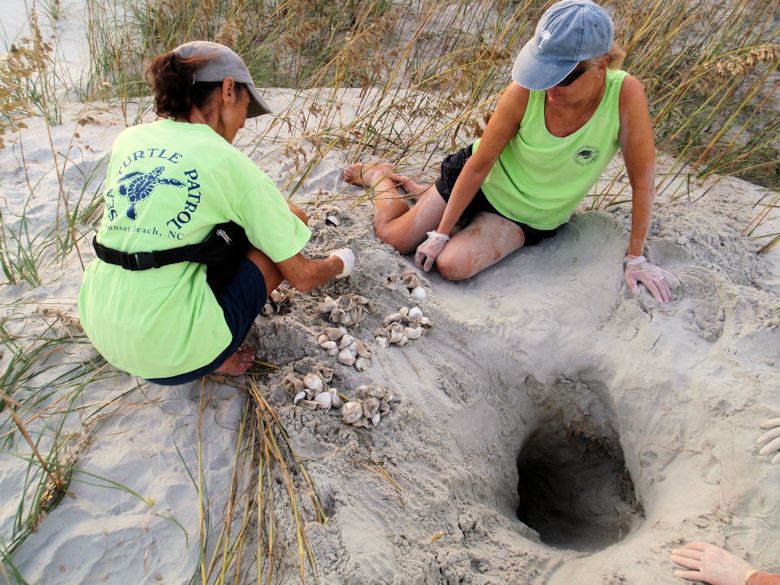 SUNSET BEACH — Even the sand seems to like Sunset Beach.

For years, it’s been coming in from offshore, adding to the already wide expanse of natural beach on the three-mile-long island near the S.C. state line. Unlike other N.C. beach communities, Sunset has never had to resort to re-nourishment.

“If I knew why, I’d be a genius,” says Orrin Pilkey, coastal geologist at Duke University.

What he does know, he says, is that “it’s a marvelous beach.”

Another reason the island is marvelous is that because of its alignment on earth – roughly northeast to southwest – you can see sunsets over the ocean.

On any given summer day, some 15,000 Sunset Beach fans would agree it’s a marvelous place. They’re the 3,600 year-round residents of the town, 100 of them on the island and the rest on the mainland, plus the nearly 12,000 vacationers who visit daily at the height of the season.

Townspeople think so much of Sunset, which celebrates its 50th anniversary this year, that they’ve held a series of anniversary parties, put together an exhibit of historic photographs at Ingram Planetarium and are collecting mementoes for a time capsule to be sealed in March.

Sunset started out low-key and residential, planned that way by founder Mannon C. Gore, says his son, Edward M. Gore Sr., who succeeded him as head of the Sunset Beach and Twin Lakes development company.

It’s still that way, says Town Council member Karen Joseph, even though “It’s a small town whose population has doubled in a very short period of time.”

The most impressive thing about Sunset may be the accommodation it makes to the ever-changing ocean, Klein says. Years of sand build-up have created a 200-foot stretch of land between homes on the island’s main street and the dune line, yet the extra sand has never been built on.

“That is so unusual,” says Pilkey.

The reason, says Gore, is prohibitive deed restrictions put in place by his father that are now part of zoning law.

To get people over the Intracoastal Waterway, founder Gore built a pontoon bridge beside his home.

“People would drive up and honk their horns,” and he’d pull the cables that operated the bridge, says Ann Bokelman of the Old Bridge Preservation Society.

Various improved versions of the old bridge lasted until 2010, when the state built a soaring stationary structure. The old 110-foot span and the tender house were moved by tugboat and crane to the mainland, where the Old Bridge Preservation Society is turning them into a museum.

Because it’s never been artificially re-nourished, Pilkey says, the island beach is “a rich ecosystem. So full of critters – mole crabs, coquinas.”

Up to 30 loggerhead turtles crawl ashore each summer to nest, says Carmel Zetts, coordinator for the 65-member Sunset Beach Turtle Watch Program. Members check nests during the hatching season beginning at 5 a.m. and, when hatching occurs, escort the hatchlings to the ocean.

Farther down the beach, on what was separate Bird Island before shifting sands filled in an intervening inlet, more dunes and marsh make up the 1,400-acre, state-owned Bird Island Coastal Reserve.

“It’s an incredible area to go kayaking in, so many tidal creeks. Just drift past the herons and the egrets and the willets and they’ll just be sitting in the grass looking at you,” says Jim Barber, coordinator of the Bird Island Stewards, who lead birding tours.

Between the natural wonders – “The sunsets are absolutely undescribably beautiful,”  says Edward Gore, and the small-town atmosphere, Sunset Beach is “a wonderful place to live,” concludes Council member Joseph.