MOREHEAD CITY – The state next year will eliminate 41 sites along coastal rivers and sounds from its program that monitors water quality for swimming because of cuts in a federal grant.

The N.C. Shellfish Sanitation and Recreation Water Quality Section in Morehead City won’t sample any sites next year in the Neuse and Pamlico rivers, Pantego Creek near Belhaven, Wilson’s Bay in Onslow County, Swan Quarter Bay in Hyde County, Vandemere Creek in Pamlico County and in the tributaries of Albemarle Sound.

Louis Daniel, the director of the N.C. Division of Marine Fisheries, sent a letter last week to county health directors, town managers and directors of summer camps in the affected areas notifying them of what he called the “temporary suspension” of sampling. The sampling program is part of the division.

The program had to scale back its monitoring after the U.S. Environmental Protection Agency cut about $22,000 in an annual grant that supports the sampling, said J.D. Potts, who heads the sampling program. EPA has historically given the state about $305,000 for the program, which tests 240 swimming areas in the ocean, sounds, bays and rivers on the coast. The grant was cut to $283,000 for next year, Potts said. 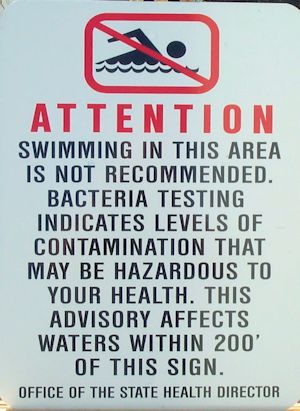 “The sites we chose to suspend are the ones with low usage,” he explained, “but they are the sites that require the most fuel t to sample. That’s what makes those areas more expensive to sample.”

Started in 1996, the monitoring program tests for bacterial contamination at popular swimming areas along the coast and posts warning signs when bacteria levels exceed the standard considered safe for bodily contact. Swimming in polluted water exposes people to pathogens that can cause gastrointestinal illness, diarrhea, vomiting, skin rashes and ear, eye and staph infections.

The 100 most popular swimming areas, which include all testing sites along the ocean and the most-used sites in the sounds and rivers, will still be tested weekly during the spring and summer next year, Potts said. The remaining sites are tested at least twice a month during the swimming season. Testing is less frequent at all sites during other times of the year.

Potts knows that a number of summer camps are on the Neuse and Pamlico rivers, but the campers, he said, don’t normally swim in the rivers. Most of the camps have pools or chlorinated lakes for swimming, Potts said. Contact with river water is incidental, such as when a camper gets in or out of a kayak or canoe, he said.

As in other states, the N.C.  sampling program expanded after Congress passed the BEACH act in 2000. The law created the EPA grant program, which has paid more than $110 million to states and U.S territories for water-quality testing at swimming beaches. EPA didn’t include the $10 million in grant money in its budget for this fiscal year, but it was carried over in the continuing budget resolution passed by Congress. Some of the money, though, was cut along with all federal funding as part of the so-called sequester.

Potts doesn’t think EPA included the grant money in its budget for the next fiscal year. The grant pays the salaries of three staff members, he said, and half the salaries of two others. If the federal grant disappears and the N.C. General Assembly doesn’t replace it with an increased state appropriation, Potts has said that he would be forced to reduce testing to just the 100 most popular swimming areas.