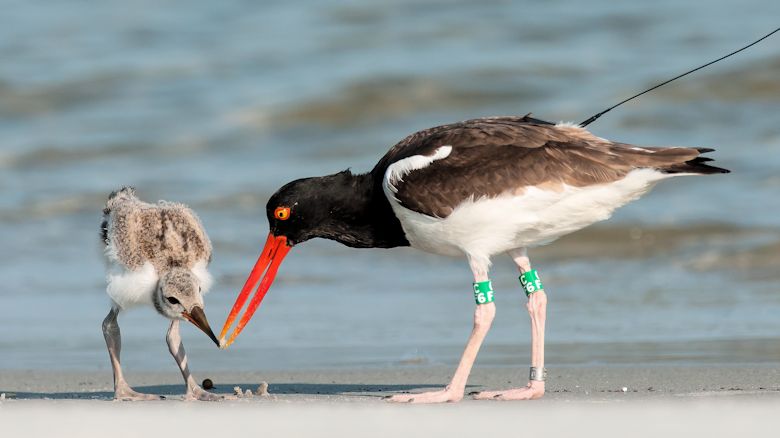 Oreo feeds one of her three chicks, none of which survived the summer. Photo: Walker Golder, Audubon North Carolina

The story first appeared in The Charlotte Observer

When the migrating urge hit American Oystercatcher CFX in mid-August, he took off from his Outer Banks home to join the party gathering on Capers Island off Charleston.

There, up to 1,000 of his fellows, striking black and white shorebirds with long orange beaks and orange-ringed eyes, fly in from Texas to Maine to spend the winters.

An S.C. Department  of  Natural Resources officer spotted CFX by the identifying number on the bright green leg band worn by birds banded in North Carolina and notified N.C. scientists who’d been keeping an eye on him.

Lindsay Addison, an Audubon coastal biologist, and Ted Simons, N.C. State University biology professor, already knew where he was, however, through a tiny backpack, or satellite tracking transmitter, that he wears. They caught him last spring at his home in Cape Lookout National Seashore and attached the $3,000 device.

Powered by a solar battery, the one-inch by half-inch backpacks that Addison and Simons have attached to six N.C. oystercatchers inform orbiting research satellites every couple of days of the birds’ whereabouts.

Checking in via computer, the biologists not only knew that CFX had gone to Capers Island, but that he made a pit stop at Masonboro Island near Wilmington along the way.

They – and CFX’s many fans on the tracking project’s Web site —  didn’t know how the bird weathered the trip of more than 250 miles, however.

When S.C. scientists gave them the heads up, Addison and Simons told CFX’s fans via the constantly-updated Web site that “CFX was looking healthy and preening himself while the flock waited for the tide to fall and their oyster buffet to become available again.”

Why all the fuss about a bird that lives only on the fringes of the Atlantic and Gulf coasts and measures from 17 to 21 inches long? It numbers only about 11,000 in its entire range, about half what it was before massive hunting wreaked havoc in the late 1800s and early 1900s.

Closely observed oystercatchers, say those who study them, are in a perfect position to be the “canary in the coal mine,” an early warning system for threats to the coastal environment.

They scrape out a nesting spot and lay their eggs right on the beach, often in front of dunes, where they’re in danger of overwash during storms and unusually high tides, a threat that scientists fear will grow with rising sea levels.

Their eggs and chicks are at the mercy of beach-going humans and the unleashed dogs they bring with them, as well as raccoons and other creatures attracted by the presence of humans. The spotted eggs blend in with the sand, Nature’s protective coloration, but people step on them and vehicles run over them.

As a result, North Carolina’s 300 to 400 nesting pairs have found refuge in government protected national seashores or conservationist-supervised islands off the coast or the Inland Waterway.  The state lists them as “a species of special concern.”

Banding has long shown scientists the end points on the birds’ migration journeys, but how they get there has been a mystery. Now, the four groups sponsoring satellite tracking – Audubon North Carolina, the National Fish and Wildlife Foundation, Together Green (Toyota/Audubon partnership), and N.C. State University – hope to learn enough to help keep them safe and healthy en route.

They hope in the future to take advantage of GPS technology, which is being used to track bald eagles and other large birds. So far, those transmitters are too large to be carried by oystercatchers, who 1.5 pounds at most.

A side benefit, say the scientists, is that oystercatchers’ looks and temperament make them great poster children for shorebird protection.

“Not only are they beautiful, humorous and attractive, interesting birds with interesting behavior, their life histories tell a really good story about the coastal environments and the factors affecting them,” says Simons.

Those orange-ringed eyes on a black head look continually surprised, and the heads bob up and down, orange beaks pointed downward, as a couple walk side-by-side during courtship. Their mating call is a sharp, rhythmic chirp called “piping.”

The sexes look alike, so Addison arbitrarily designated males and females – CFX may be a girl.

Both sit on the eggs and are attentive parents, often standing over eggs or chicks to shade them from the sun.

Threats to their territory bring out the swashbuckler in them. “They will put their heads down, put their feathers out, charge at each other and call,” says Simons.

“Making a big Web site out of it, putting the birds on Facebook (under Audubon North Carolina)  and Twitter (under AMOYtracking) allows people to track the birds,” says Addison.

It also lets watchers in on the birds’ misfortunes. Because of predators and other factors, all six pairs were only able to raise one chick between them this summer. It belongs to Arnie, a Cape Fear River bird.

A gull or another oystercatcher attacked so viciously that the chick had to be caught and euthanized.

Nesting success for oystercatchers is very low, with only about one-third of nesting pairs fledging chicks in any one season, Simons says. But the birds live 20 to 25 years, and that success rate is enough to maintain a stable population.

And Simons says that North Carolina’s total population seems to be inching upward, thanks to closing of certain areas of beach at critical times and efforts by the National Park Service and the public to better handle raccoon-attracting garbage at Cape Hatteras and Cape Lookout national seashores.

The satellite tracking attempt suffered a minor setback when three birds – Arnie, CF7 and Orange Green – preened underneath the transmitters’ Teflon leg bands so vigorously that the backpacks fell off and were lost.

The scientists had hoped that all six birds would keep the three-ounce devices on through migration, but the information already gained made up for the disappointment, Addison says.

“It’s a learning process. We’re learning about their movements, their habitat use – and also about techniques for better attaching these transmitters.”