Reprinted for The Outer Banks Voice

NAGS HEAD — Some traveled across the breadth of the continent from places like Palmer, Alaska, British Columbia and the far reaches of Texas.

One family gathered four generations of descendants, including a captain in the U.S. Coast Guard, the branch of the military formed in 1915 when Congress merged the U.S. Life-Serving Service with the Revenue Cutter Service.

Later added in 1935 was the U.S. Lighthouse Service in 1935, the agency that employed the lighthouse keepers.

Hundreds of other family members, lighthouse aficionados and history buffs joined the descendants for the celebration.

The reunion was made possible by the efforts of several volunteer organizations, spearheaded by the Bodie Island Lighthouse Descendants (BOLD) and the Outer Banks Lighthouse Society.

The National Park Service, its staff and employees are also essential partners in these reunions, even more so this year as the government shutdown threatened to displace the homecoming from the Bodie Island Lighthouse site.

Genealogy is obviously an important part of this event, and dozens of ceiling-to-floor “family trees” adorned the walls at the Comfort Inn South in Nags Head, where the event was headquartered.

Close to 350 documented descendants had checked into the event on Oct. 19, according to genealogist Sandy Clunies.

Clunies said the descendants came from all walks of life and many still live in Dare County and adjacent counties.

Some of those descendants, now four generations down the line, are still active duty members of the Coast Guard.

The area’s lighthouses lay claim to the title of the most recognizable icons of the Outer Banks and have become the unofficial logo for the Outer Banks tourism industry.

Visitors flock to the four structures along the Dare and Ocracoke coast.

We revel in the history of the structures operated by the Lighthouse Service as well the brave lifesaving crews who manned our beaches as part of the U.S. Life-Saving Service.

During the summer, the National Park Service and volunteers hold regular demonstrations of how the lifesaving crews worked from the beaches to save the crew members of shipwrecked vessels.

Through this event, we learned about the men and their families who lived on site and kept these important beacons in working order, uneventfully saving lives by keeping sailing vessels away from dangerous coastal shoals.

Clunies prepared each of the numerous family trees mounted on the Comfort Inn’s walls, one for every known lighthouse keeper at Bodie Island.

The genealogist went a step further, preparing a personalized certificate for every individual registrant of the program. She made 208 individual charts by hand and took the time to go over them with each registrant who stopped by to talk with her.

Clunies said many of the descendants use these events to stay in the area all week, turning the homecoming into mini-family reunions.

For Bodie Island, her database is composed of 23,000 individuals.

She printed her wall charts based on family members who registered, so that reduced the number of names she had to print. Even so, Clunies said one lighthouse keeper, Peter Gallop, sported a list of 1,066 descendants who were related to the attendees.

The main events are reserved for descendants, so Clunies explained no one arrives and “discovers” they have a lighthouse keeper in their past.

But because of the small local population and the number of local men who became lighthouse keepers, registrants often discover they have more than one ancestor who was a lighthouse keeper.

Clunies said one descendant has five direct lines, or five grandfathers who were keepers.

Copies of old federal records, meticulously maintained by the keepers, who were required to be literate, reflect the changing geographic name of the lighthouse from Boddy to Body to Bodie.

Not every lighthouse keeper’s lineage can be traced to current-day descendants.

On Saturday, the main activities took place on the site of the Bodie Island Lighthouse, a National Park Service facility.

Because of the government shutdown, it appeared the Bodie Island park would still be closed, so the outside tents, chairs, and tables were moved to the Comfort Inn South on short notice.

Jamie Chisholm, the events manager at the hotel ,told us everyone from her management and owners to the members of BOLD and the Lighthouse Association pulled together to move activities to the South Nags Head oceanfront hotel.

Three days before the event, the government re-opened, and Cyndy Holda, a Parks Service spokeswoman, got on the horn to Ocean Atlantic Rental’s Chris Marik, who was out surfing, and asked if he could move everything back to Bodie Island.

Marik’s crew responded and had everything in place for the opening on Friday.

One of the most interesting events on Saturday at Bodie Island was a panel discussion of children who lived in the Currituck and Bodie Island keepers quarters, the latter one being a duplex shared by two families.

Not only were those in attendance provided a glimpse of life at the lighthouse, but much was learned about life along the Outer Banks during the 1930s and 40s. 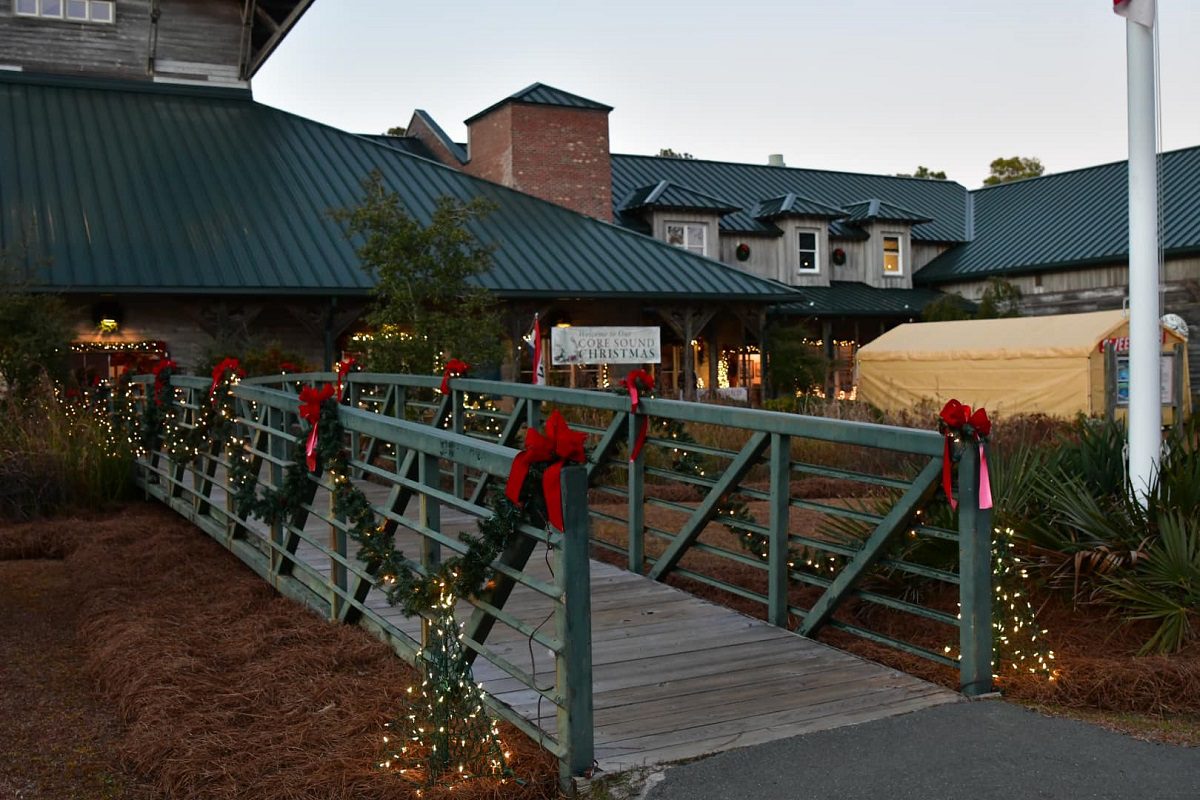