HAMPSTEAD — Semi-transparent saucers adorned the sandy beach, each one fluidly embedded in a precise location where the zenith of a gentle wave left it stranded. In mere minutes unblemished seashore was transformed into a necropolis of alien beings, moon jellies, Aurelia aurita, whose last act of life was a single pulsate, followed by a perfect, limp stillness. For me, it seemed a sad ending to organisms that in adulthood, never knew earthen boundaries; that is, until this terrestrial beach became their final resting place.

The ill-fated sea jellies were left stranded by an inescapable confluence of ocean currents, a prevailing onshore wind and a rising tide; a sudden finale for water-borne creatures to which the full force of gravity may have been as foreign an awareness as air. Admittedly these are the very conditions that have acted on moon jellies since their beginning… time, space and physics… influencing the jelly’s natural resilience, much as that might seem a counterintuitive conclusion, judging from the beach scene in front of me.

Moon jellies are common sea animals, found in temperate regions of the world’s ocean. They are members of an ancient group of animals in the Phylum Cnidaria. These aquatic animals include sea jellies — also called jellyfish though not technically a fish — corals, sea anemones, freshwater hydra and other invertebrate animals that bear stinging nematocysts, the business end of a cnidarian’s feeding and defense system.

Simply described, a nematocyst is a sac-like structure, smaller than a grain of sand, which contains a tiny barbed harpoon attached to a coiled venom duct. When stimulated, especially by touch, the harpoon thrusts outward to pierce a victim, which is further subdued by venom.

The moon jelly’s nematocyst harpoon is small and its venom relatively weak, owing to this animal’s preference for tiny planktonic prey, including copepods and other crustaceans, and larva of fishes, worms and mollusks. 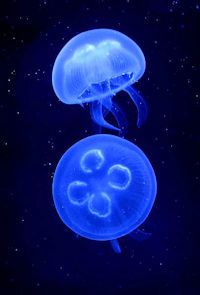 While standing in knee-deep water watching a helpless phalanx of moon jellies drift to shore, I brushed one of the animals from my legs and as I did so, some of its tentacles became trapped between my watchband and wrist, resulting in a mild itching-burning sensation from the nematocysts. For someone allergic to insect venom this kind of experience could be dangerous, but for me it was little more than a reminder that all but a very few sea jellies can sting.

In a very real sense, moon jellies are themselves planktonic, a term that generally refers to plants (phytoplankton) and animals (zooplankton) that drift with water currents. Moon jellies can propel themselves by pulsing their dome-shaped bell, but only enough to rise and fall through the water column; they cannot overwhelm even a mild current.

Moon jellies are most often seen in North Carolina waters during warm seasons, especially toward late summer and early autumn, which is when I happened upon what might be described as a gelatinous strandline carnage. Looking upon the cast-up gobs of congealed protein, the only solace I could conjure was the realization that these full-grown beings likely came to shore after casting eggs and sperms (female and male gametes) into the sea, an act of reproduction requiring laws of averages, proper timing and a good deal of natural luck.

I realize luck is not truly part of the sea jelly life cycle; it’s just difficult for me to visualize little packets of genetic material (female and male chromosomes) swirling in an open ocean, and finding their respective partner…before being consumed by a plankton-eater, or otherwise simply swept into an ocean-scale flow of ecosystem energy. The odds of moon jelly reproductive success are increased because these animals congregate in the open ocean, for reasons having to do with ocean currents that also congregate plankton that moon jellies eat. But these same nurturing currents can turn tragic, in a dramatic sense of the word.

As I stood knee-deep in a beach swash zone, I couldn’t help grimacing as once graceful, water-borne saucers were swept inexorably toward land, and the lifting help of small waves that left one after another stranded as an inelegant heap upon the sand. And then I noticed the jellies were not alone. Each floating saucer was accompanied by an entourage of small fishes, mostly juvenile filefish, no larger than a fingernail. The filefish, along with a few striking young jacks, two inches long and boldly banded in black and yellowish-white, stayed with the jellies up to the last wave.

The young fishes may have been using the jellies as nomadic shelter, to hide from predators. It is also possible that the fishes just used the jellies as a wandering restaurant, feeding on sea jelly gametes cast into the water. The plucky little fishes might also have gleaned tiny creatures caught by the jelly’s delicate tentacles, a banquet of morsels speared by nematocyst harpoons. Not too unlike taking appetizers from toothpicks.

I watched as one group of fishes after another hop-scotched seaward, from one moon jelly to another, just in time to escape the waves that cast their Cnidarian escorts to terra firma. My heartstrings were finally tugged when several young fishes raced to the shelter they believed my submerged legs might provide. If only I could have become an immobile pier piling to offer these unsettled creatures some form of shelter; or not. Much as I might have wished to be of service, these finned nomads had other places to be, with options spanning the width and breadth of a sea.

The act that took place around me on that autumn beach is a repeat performance of countless similar events that have befallen untold generations of sea jelly and fish alike; a natural scene repeated through history, with consequences that have honed jelly and fish into the finely-adapted ocean-beings we still know too little about.

So, what seemed a poignant story of dislocation, unintended abandonment and a frantic search for shelter, the sea jelly saga was really more an event to celebrate—as testimony to the resilience that is nature.

Andy Wood is a coastal ecologist, lecturer and author of "Backyard Carolina: Two Decades of Public Radio Commentary." Andy’s focal interests include conserving rare and endangered species and their habitat. In fact, Andy is leading efforts in Pender County where he lives to prevent the extinction of an endemic freshwater snail and its habitat. Andy is the former education director for Audubon North Carolina and the former curator of education for the N.C. Aquarium at Fort Fisher. He is currently president of Andy Wood & Associates, a conservation consulting company.