Before today’s professional chefs created the likes of pecan-crusted flounder filets, chipotle honey-glazed grouper and seared sea scallops laid on dollops of every sauce imaginable, there were onions, potatoes, salt, pepper and a little pork fat. Those five ingredients were the mainstays of coastal North Carolina seafood preparations.

As far as locals were concerned, the less you did to fish, shrimp, crabs, oysters, clams and scallops, the better.

What is the point of fresh seafood if it doesn’t taste like fresh seafood has long been the reasoning of fishing families living along the Carolina shore. Their no-frills clam chowder, basic drum stew with cornmeal dumplings and plain, broiled mullet paired with fresh watermelon are the sorts of recipes that might have been lost in the current era’s sea of foodie creativity had it not been for Coastal Carolina Cooking.

The book compiled not only traditional N.C. seafood recipes, but all manner of native fare as well as resident cooks’ stories and tips. Despite being published 27 years ago by the University of North Carolina Press, Coastal Carolina Cooking remains a lively and practical reference and one that no American food history buff should be without.

In the early, 1980s, authors Nancy Davis, who worked in the University of North Carolina-Chapel Hill development office, and Kathy Hart, a writer who was with North Carolina Sea Grant, set out to chronicle “the traditional cooks and cooking of the North Carolina coast.” They traveled from the northern hamlet Maple, near the Virginia state line, to Holden Beach at North Carolina’s southern tip. The women spoke to cooks who recalled old times as far back as the turn of the 20th century.

“Food is central to the family in coastal North Carolina,” they wrote. “The aromas of frying bacon or a simmering stew signaled the beginning and ending of each day when all the family gathered at the table.”

Mild seasoning was born of place as much as preference. Hart and Davis noted that many families combined farming and fishing. Often, recipes called for corn, cabbage, figs, berries, collard greens, potatoes and sweet potatoes, which all grow well in North Carolina’s sandy coastal plain. In the early and mid-20th century, if people went to the store, it was for flour, sugar, coffee or tea, perhaps a piece of pickled pork, although families raised livestock and birds. They hunted, too.

Much food was stewed or baked, no-brainer methods that imaginative home cooks today might be surprised to discover produce rich flavors. Popular stewed or “stew-fried” dishes began with cooks frying a few pieces of salt pork until the tasty fat was rendered and thereby available to season the dish. From there, seafood and potatoes or sweet potatoes could be added to create tasty, one-pot meals. Alternately, whole fish were baked in the oven with potatoes and onions, perhaps garnished in summer with fresh tomato slices.

Modern cooks might pass on such humble fare for company, thinking the recipes would not be impressive enough. In fact, no-fuss clam bakes, oysters roasts and fish cooked over hot coals were the choices for long-ago get-togethers. Vera Gallop of Harbinger told Hart and Davis about one such regular event.

“During the fall mullet runs, Vera’s neighbors would assemble for a community treat — a mullet barbecue. The mullet were staked and placed over hot coals. While the mullet cooked, the neighbors enjoyed fellowship and the view of the sound.”

Gallop, like all the book’s subjects, shared various food stories and cooking tips. Some dishes recalled the game that men hunted when they weren’t fishing.

Maple resident Katherine Taylor’s recipe for roasted coon emphasized removing the scent glands from under the animal’s front and back legs before parboiling and then rubbing the coon with sage before the final roasting. 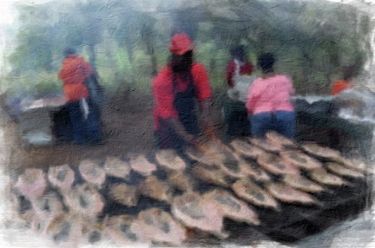 Jeanie Williams of Manteo advised that the cooking time of roasted swan would depend on the size and age of the bird. “You can tell the age of the bird by the number of pin feathers it has,” she said. “Younger birds have more pin feathers.”

Certain deep-rooted cook’s tips are constant. Sneads Ferry restaurateur Percy Jenkins “dredges his shrimp twice before he fries them because he says that helps them retain more moisture.” Hart and Davis wrote. After Georgie Bell of Harkers Island rendered the fat from salt pork for her clam chowder, she “likes to eat the fried meat as though it were fried pork skins.” Letha Henderson of Hubert said “sassafras tea is a good blood cleanser.”

Hart and Davis included timeless information about judging, purchasing and handling seafood along with historical nuggets about fishing, ingredients and coastal communities.

Of course, the book’s caring cooks didn’t forget dessert. They made fig puddings, stacked layer cakes with homemade jelly and stewed Muscadine grape hulls or picked hickory nuts for pie filling, among various other sweet treats in the book.

“Many a girl’s first date was a fudge party or candy pull supervised by her mother,” Hart and Davis wrote.

The stories and recipes in Coastal Carolina Cooking stir yearnings for family, close friends and the ever- receding “good old days” no matter if readers hail from city or countryside. By the end of the book, each chapter’s cooks, depicted in illustrations, feel like family. As Hart and Davis wrote, “These are special people, and they are what make this book more than a compilation of recipes.