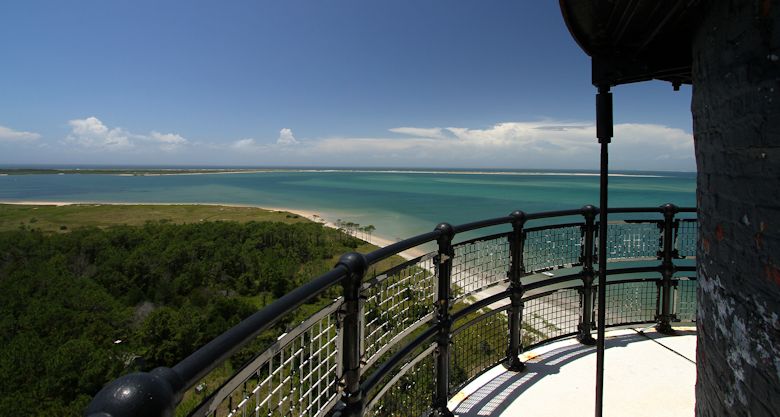 The view from the top of the Cape Lookout Lighthouse can take your breath away. Here, we’re looking south across the Bight toward The Spit, which is favored in the fall by fly fishermen hoping to hook into albacore.

HARKERS ISLAND — After millions of years of erosion, winds, tides, currents, storms and hurricanes, the N.C. coast is now decorated with barrier islands and three prominent capes. Each of these capes, Hatteras, Lookout and Fear, has their own distinctive natural and cultural history.

As a native of Carteret County, I am very familiar with and have visited Cape Lookout many, many times. Yet as a result, I have also taken Cape Lookout for granted. The words “Cape Lookout” immediately bring to mind memories of fishing, swimming, surfing, boating, history, sea turtles, shore birds, isolation, serenity and, of course, the lighthouse. Thus, I decided to refresh myself in the wonder of this amazing place.

I recently hopped on one of the local ferry service skiffs out of Harkers Island for a kidney pounding ride across Back Sound and Barden’s Inlet on a brilliant but windy summer afternoon. Off in the distance, the lighthouse beacon was winking every 15 seconds as the ferry captain expertly skimmed the craft over the crystal clear, shallow, turquoise waters. As we rounded the tip of Shackelford Banks and before entering the famous Lookout Bight, a welcoming committee of Banker horses lounged lazily in the hot, baking sun.

An early morning squall had left most boats anchored at the docks, leaving the Bight harbor practically empty. The Lookout Bight has long been a refuge for mariners seeking shelter in a storm. The Native Americans, known as the Coree, were most likely the first to ply these waters in their dugout canoes. Over the years, Florentine explorers, Spanish and French privateers, British warship, whalers, lifesavers and the U.S. Coast Guard all have dropped anchor here. It has even been suggested that Blackbeard the pirate sailed out of the Bight to prey on merchant ships. This site was so valuable to a group of French privateers that they built a fort, called Fort Hancock, to keep the British ships at bay during the Revolutionary War.

Without a pirate in sight, the ferry captain dropped me off at a dock just a short distance from the Cape Lookout Lighthouse. Today, as a national seashore, Cape Lookout congers up images that in no way reflects the impressions it had on ancient sailors. Some of the earliest maps of the area name this sandy hook-shaped spit as Promontorium Tremendum, which translates into Horrible Headland. Reaching out, up to 16 miles off the cape, shallow sandbars snared unwary ships like a moth in the web of a spider.

Owners and captains of merchant ships soon demanded that a lighthouse be built to guide the ships. A 94-foot tall brick and wood, red and white tower was built in 1812 to provide a beacon of salvation. Yet, the height of the structure proved to be limited in providing an effective reach of the beacon out to sea. This limitation was rectified in 1859 when a new 163-foot lighthouse was built, providing a light visible up to 18 miles.

One hundred and fifty four years later, the lighthouse still stands tall and after some safety renovations, the National Park Service is allowing visitors to climb the tower. The early light sources were lamps fueled with whale oil or kerosene and were magnified by the powerful prisms of a first order Fresnel lens.  As I began my climb up the stairs, I tried to imagine carrying a 45-pound, 5-gallon can of fuel all the way to the top. Climbing 216 steps, the lighthouse keepers must have developed enlarged quad muscles that would make a professional cyclist jealous. The red brick interior stair case was wider than I expected and the short steps made for an easy climb. Near the top, the short final staircase is quite narrow before reaching the landing that accesses the exterior catwalk. I needed to crouch and awkwardly step through the short steel fortified hatch doorway that has sealed out many of a hurricane. Outside on the gallery, I righted myself as the view and wind took my breath away. Involuntary reflexes allowed me to continue breathing as the beauty of Cape Lookout stretched out below me, overwhelming my senses. Every direction was pure delight, eye candy as some would call it.

A limited number of visitors are allowed on the gallery at a time, resulting in time limits. Fortunately for me, it took a while for another group to reach the top, thus, I was allowed an extended stay causing my mind to imagine the past and what might have been.

From the gallery I could see a long rock jetty on the west side of the cape. This jetty was built in 1914 to elongate and reinforce the sand spit in anticipation of a railway from Beaufort to the Cape in hopes of developing a significant coal port. A railway would have surely resulted in development of this pristine shoreline. Indeed, the Cape Lookout Development Co. was established to begin construction of a residential community. However, the uncertainties of World War I caused the project to stall. 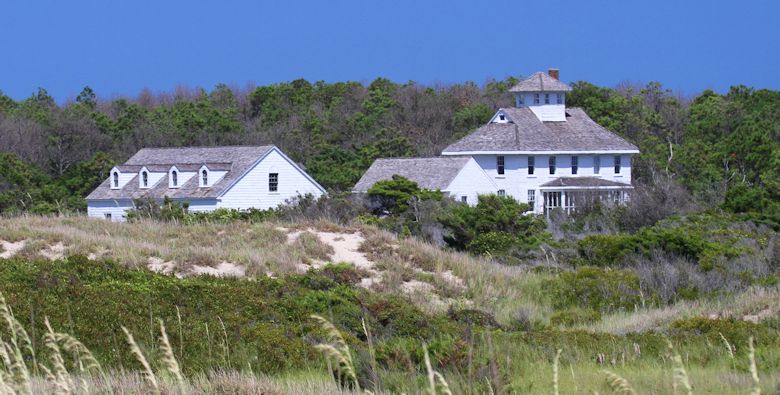 The old Coast Guard Station was built in 1916 and consists of several wooden buildings. The chief structure is the Main Station, far right, a neo-colonial building with a central cupola or watchtower. The Coast Guard closed the station in 1982. The buildings are now owned by the National Parks Service.

Even the lighthouse itself almost came tumbling down during the Civil War. When Union armies controlled the Cape, Confederates tried to blow up the lighthouse to prevent its beacon from benefitting Union. The explosion caused only minor damage.

In 1880, the Cape Lookout Lifesaving Station kept a presence on the Cape and eventually closed over 100 years later as a U.S. Coast Guard station in 1982. Numerous hurricane dispatches were reported from Cape Lookout by the U.S. Weather Bureau Station for almost 30 years until it closed down in 1904. During World War II, Battery Cape Lookout was constructed and armed with large naval guns to protect the coast from the German submarines that prowled just offshore.

Reluctantly, I stepped back through the hatch and into the watchroom. On this upper landing you can see into the lantern room and watch the two rotating beacons that replaced the Fresnel lens in 1975. After I headed back down a ways, I looked up at the twisting spiral staircase. With the steps and central support post it looked like a giant auger spinning in a shaft.

Once out of the lighthouse, I followed a long boardwalk that protected the fragile dune fields and emptied visitors out on the beach. Even though the wind had subsided quite a bit, the gorgeous golden beach was practically empty except for a few tourists — called “dit dots” by the locals — lying prone on beach towels getting a sizzling sunburn on their alabaster bodies. At the end of the boardwalk I sat on a bench for a brief rest and watched the tumbling surf crash on the beach.

Throughout the dunes, the sand stabilizing plant, sea oats, were busting open with fresh seed heads that danced in the breeze. The roar of the surf and the swishing of the sea oats were lulling me to sleep.

Off in a low dune valley, a blanket of firewheel flowers created a colorful meadow that looked like an inviting place to take a nap. But once out of the cool ocean breeze, I knew that the searing sun would shrivel me up like the pink morning glories that lined the trail.

I finished my visit to Cape Lookout by walking along the shoreline of the Bight and saw bits of the past in chips of broken china plates and hand blown glass bottles. Out of nowhere, a group of black skimmers glided gracefully above the surface of water and reminded me of the wildlife surprises that the Cape has to offer. This is a place where you might see a huge female leatherback sea turtle crawl ashore to lay her eggs on a warm summer night or you might catch a glimpse of a harbor seal resting and sunning itself on the beach on a cool late winter day.

I often take long bicycle rides along our coastal barrier islands and whenever I’m on Bogue Banks, I follow an urge to ride to Fort Macon and look east out over Beaufort Inlet and find the lighthouse silhouette on the horizon. I’ll stare intently until I see the flash of the beacon. In my early 20s, I worked as a park ranger at Fort Macon State Park and loved it when the strong cool fronts pushed through in the early fall erasing the sticky summer haze that often obscured viewing the lighthouse. From the top of the fort, the lighthouse would pop out from the horizon against a crisp brilliant blue sky background resembling an oil painting.

Cape Lookout is beloved by many and in eastern North Carolina it is easy to find miniature Lookout lighthouse replicas adorning yards as lawn art. I have heard that some of the lifelong locals that live under the sweep of the beacon refer to the comforting flash of the lighthouse as the beating of their heart. Just as the deep foundation that anchors the lighthouse firmly in the sandy soil, this lighthouse is an anchor to my roots in Carteret County.