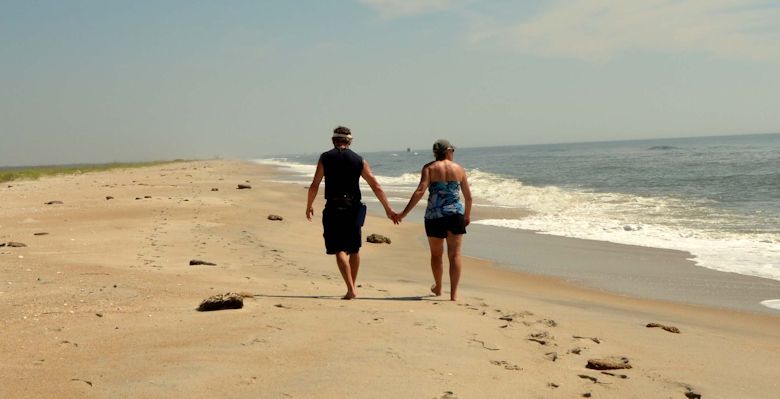 Hand-in-hand, Peter and Cathy Meyer plans to walk the length of North Carolina’s beaches and write about their experiences in a series of e-books. Photo: Tess Malijenovsky

WILMINGTON – Maybe someone has walked the length of every beach along North Carolina’s coast, but Peter and Cathy Meyer are the first to write an iBook about it.

Coastwalk North Carolina is not only the story of their adventure but an adventure to read with numerous photographs and short videos. Its electronic format brings North Carolina’s coast to life in ways the printed page never could.

If only I could read it. I don’t own an iPad. While the e-publishing industry evolves and until it matures, Coastwalk North Carolina will remain exclusive to e-readers, specifically those with iPads. Like many others traveling the service road of the information highway, I haven’t quite kept up to speed with the digital revolution—I still print film in a darkroom and, I have yet to ask Siri a single question.

I can access the beach for a walk, which is precisely what I did with the “Coastwalkers” on Masonboro Island to learn more about their e-book.

“We take long walks on the beach to another level,” Cathy says.

Peter and Cathy are a close team and as down-to-earth as one would expect from a couple who coined the shorter, flatter version of the Appalachian Trail for beachcombers. They welcomed me aboard their 16-ft Carolina Skiff called “Tern,” aptly named after the small and agile least terns on Masonboro Island that they are happy to see growing in numbers since the fox extermination last winter.

In little more than five minutes we were at the backside of Masonboro, one of their favorite morsels of beach to walk. The Meyers have been exploring and feeding their insatiable curiosity about the coast with research for over 30 years. In fact, they self-published Nature Guide to the Carolina Coast: Common Birds, Crabs, Shells, Fish, and other Entities of the Coastal Environment in 1991, selling over 80,000 copies.

Walking on Ocean Isle Beach one October day in 2010, Cathy turned to Peter and suggested, “Well, why don’t we just walk the whole coast?” They’d been to bits and pieces of almost all the islands but never explored the entire coastline.

“Ok,” Peter said, and they walked the full length of Ocean Isle Beach that day.

For the next 15 months the Meyers hop-scotched North Carolina’s coastline, tackling one beach at a time and walking eight to 12 miles a day. Coastwalk North Carolina encourages readers to take the beach pilgrimage whether it’s done in one shot or in sporadic trips. 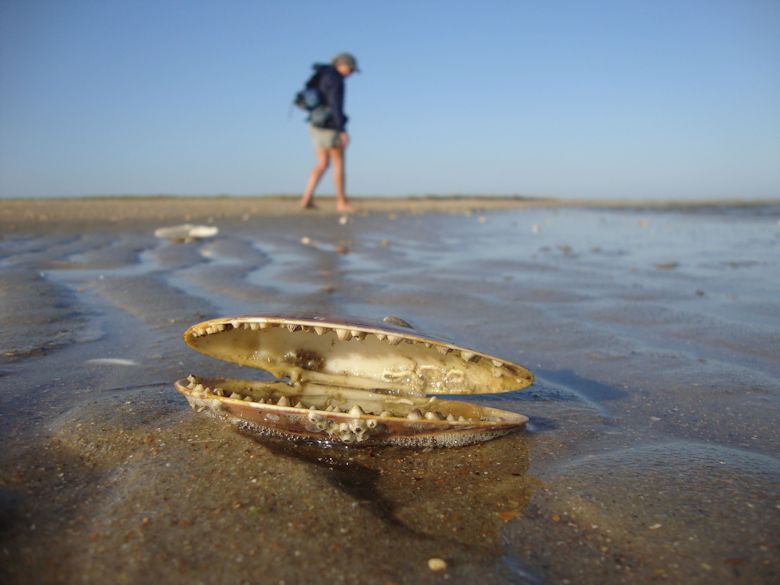 A barnacle-encrusted sun ray Venus clam is just one of the many delights that await a determined coastwalker. Photo: Peter Meyer

The e-book includes essays about their adventures and observations as well as useful tips like what to pack, where to park and what nature to spot along the way.  Or so I’m told.

“I don’t think the public is aware of the opportunity they have—425 miles of beach distance that is wide open, that anybody can walk and enjoy. We need to keep that. We don’t need to do anything to alter the public beach so that the public can’t use it,” says Peter in reference to the terminal groins, jetties and other such structures that are planned to protect privately owned property, meanwhile starving the public beaches. Peter bends down to pick up some plastic washed up on shore.

Coastwalk North Carolina brings the coast’s current state to light, the good and the bad. “(Our coast) is not just a beach vacation. It’s a whole ecosystem,” says Cathy. “If you get out there, you get a feel of the pressures that are being put on the coast. I think people would get that message if they just got out and walked a little bit more than their romantic long walks.”

Ironically Coastwalk North Carolina invites us to engage with our coast via another anonymous device with a screen. Alas, e-books are the future and the Meyers are in the forefront. E-book sales are expected to grow to $12 billion in 2017, up from $6.6 billion this year, according to Forrester, a global research and advisory firm.

“I’m still one of these people that would much rather have a book in my hand that I can leaf through at my leisure instead of sitting at yet another little computer screen to read an electronic book. But, iBooks Authors offered us a lot of innovative ways to present what we experienced on the coast walk,” says Cathy.

Not only is e-publishing ideal for heavily illustrated and interactive books, but the cost to self-publish electronically with iBook Authors is virtually nil, Peter says. He believes the future is digital and that economics will dictate so.

“Eventually people are not going to want to pay $25 for a printed book when you can get it for $8 online,” says Peter. “Unfortunately I think in this world there’s going to eventually be a have and have-not access to digital information. If you don’t have some kind of access in whatever form or device in the future, you’re going to be at a disadvantage and that’s a shame.”

Coastwalk North Carolina is being released in a four-part series: SOHO—Sunset Beach, Ocean Isle Beach, Holden Beach and Oak Island; Between the Capes—Cape Fear to Cape Lookout; Wild Banks—Cape Lookout to Hatteras Inlet; and, Out There—Hatteras Inlet to the Virginia border.

If you’re already a part of the digital coup, you can preview the e-book for free on the iBookstore. For you Kindle revolutionaries, there is a version for you in the works.

And for us service road plodders, maybe it’s time we ask ourselves if we will resist change or embrace it. Maybe if we embrace it, we can help shape the direction its heading.

Join the conversation on our Facebook Page
Previous Post: « Growing Up as a Student of the Sounds
Next Post: Groups Win Appeal on Bonner Bridge Permit »