NEW YORK — The National Oceanic and Atmospheric Administration announced on May 10 that concentrations of atmospheric carbon dioxide, or CO2, surpassed 400 parts per million, or ppm, in the clean air above Mauna Loa, Hawaii, where researchers have been testing the air for CO2 for more than 50 years.

Ordinarily, a gas in the atmosphere passing a certain level would attract little attention, even from scientists. CO2 is a different story, but why? Why should society care that CO2 is now as high as 400 ppm? The reasons are multiple, but all trace back to the relationship between CO2 and temperature.

Today, we’ll learn why scientists place so much emphasis on the amount of CO2, and how today’s levels compared to the past. Tomorrow, we‘ll explore the effects of a 400 ppm CO2 world, particularly how it might affect sea-level rise. 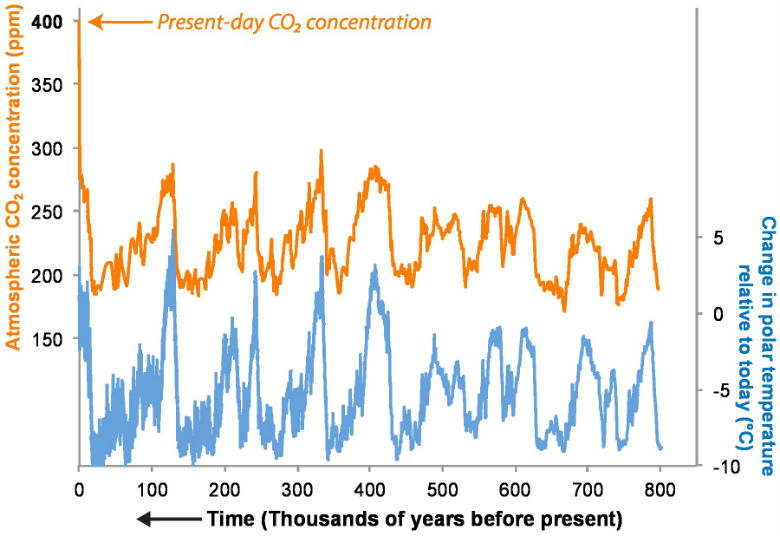 Ice core records of CO2 and climate over the past million years: The concentration of CO2 in air bubbles within Antarctic ice cores (orange, scale at left) and change in Antarctic temperature relative to today (blue, scale at right). Present-day CO2 concentration is indicated by the orange dashed line. The chart shows that temperature and CO2 are tightly coupled over time, with higher CO2 corresponding to warmer temperatures. Data from NOAA Paleoclimatology Program

Why is CO2 important for temperature?

First and foremost, CO2 is no ordinary gas. Though a minor constituent of Earth’s atmosphere, CO2 plays an outsized role in influencing climate because of its “greenhouse” properties.

The structure of a carbon dioxide atom allows it to reflect radiation emitted by the Earth’s surface that would otherwise return to space, trapping heat like the glass panes of a greenhouse. This can get very complicated very quickly. The web site Skeptical Science has an in-depth examination of the subject for those wanting more detail.

But here’s the bottom line: When atmospheric CO2 concentrations increase, more outgoing radiation is absorbed, leading to warming of the Earth surface.A byproduct of burning fossil fuels, the concentration of carbon dioxide in the upper atmosphere has been steadily increasing since the dawn of the Industrial Age.

The relationship between CO2 and climate is especially evident when looking back through Earth’s history. A particular field of environmental science, paleoclimatology, studies past climates using clues from archives of Earth’s history, including rocks, sediments and ice. With information gathered from these archives, scientists seek to understand how and why Earth’s climate has changed in the past and what these mechanisms mean for current and future climate change.

“Paleoclimate studies provide very strong evidence that there is a tight connection between CO2 and climate,” notes Bärbel Hönisch, an assistant professor in the Department of Earth and Environmental Sciences at Columbia University. Gas bubbles found in ice cores from Antarctica over the last 800,000 years demonstrate the close linkage between past atmospheric CO2 levels and past temperatures, estimated from the ice’s composition. Taken in the context of that long-term record, atmospheric CO2 today is nearly 50 percent higher than the highest level measured in the ice cores.

400 in Context: The Pliocene

For paleoclimatologists, the 400 ppm CO2 level is significant not so much for the absolute number, but rather because it suggests a return to a type of climate not seen on Earth for millions of years. “We’re passing through a number easily divisible by 100, but a year from now it will be 402 [ppm]… it’s an inexorable climb to higher values,” says Peter deMenocal, professor and chair of the Department of Earth and Environmental Sciences at Columbia University.

As a consequence of this climb, “We are starting to head back into deep geologic time,” notes Rob DeConto, professor of climatology at University of Massachusetts-Amherst.

When was the last time CO2 levels were 400 ppm? Scientists know from ice cores that this cannot be any point in the past million years or so. To look at time periods before the ice cores, CO2 cannot be measured directly; rather, it has to be inferred from the geologic record. By measuring “proxies” of atmospheric CO2, such as tree rings, coral growth and other physical or chemical variables that relate to atmospheric CO2, scientists can reconstruct CO2 levels in the past with a reasonable degree of precision.

But such measurements are not smooth sailing. An expert in CO2 proxies, Hönisch is candid about the difficulties. “There are only a handful of studies to reconstruct past CO2. It’s difficult—a lot of these proxies are in their infancy, and they are challenging and expensive measurements to make,” she says.

Nonetheless, the records produced by Hönisch and other laboratory groups converge on showing that the last time CO2 levels were around 400 ppm was some 3 to 5 million years ago during what is known by geologists as the Pliocene Epoch. “We’re definitely in the Pliocene now,” agrees Maureen Raymo, research professor at Columbia’s Lamont-Doherty Earth Observatory.

That the Pliocene is an analog for today’s CO2 levels is little comfort to paleoclimatologists. “If you go back to the Earth 3 million years ago, it was a very, very different world than today,” says deMenocal.

For instance, DeConto, Hönisch and Raymo all note that Greenland covered in nearly a two mile-thick ice sheet today, was largely ice-free in the Pliocene. Scientists estimate that global sea level during the Pliocene was anywhere between 30 and 90 feet higher than it is today, according to a 2012 study. Temperatures along the East Coast of the United States were likely 5 degrees warmer on average than today. That may not sound like much, but imagine every 95-degree summer day being 100 degrees instead.

Now that CO2 has hit 400 ppm, why haven’t camels returned to Ellesmere Island? And why didn’t the temperature on Ellesmere increase by 32 degrees on May 11?

The reason is that climatic response to CO2 is not instantaneous. “Our climate is vastly out of equilibrium with CO2 levels today, largely because of the oceans,” says deMenocal. Water has a large capacity to accumulate excess heat. Add up all the water in the ocean and you get a massive heat sink that takes a long time to adjust to the impact from CO2 changes.

Because they encompass broader time intervals, paleoclimate records give an image of what conditions look like at equilibrium. “The Pliocene is a good analog for how future conditions will be when they come to equilibrium with the current concentration of CO2, but that equilibrium can take two to three thousand years,” says Raymo. In short, we haven’t reached the point yet where the world’s climate behaves as would be expected in a 400 ppm world.

But we are well on our way. Even though it takes millennia to achieve equilibrium between CO2 and temperature, some effects of higher CO2 are already being realized. Parts of the climate system that are highly sensitive to changing CO2, such as Arctic sea ice and polar temperatures, are already responding. And the world is warming. “If you were born in the 1990s, almost every year of your life has been a record warm year. It’s remarkable,” says deMenocal.

“We are living in a world where the rate of change is accelerating,” adds deMenocal. “It’s like steering a supertanker through a narrow channel, but we have no idea how to steer the ship. And the ship is gaining speed.”

Thursday: The seas in a high CO2 world

Jesse Farmer was raised in Emerald Isle and is currently studying for his Ph.d. in paleoceanography at the Lamont-Doherty Earth Observatory of Columbia University in New York. His research has been published in the journals "Paleoceanography" and "Geophysical Research Letters." He sorely misses surfing in boardshorts and wishes the Gulf Stream would come farther north.