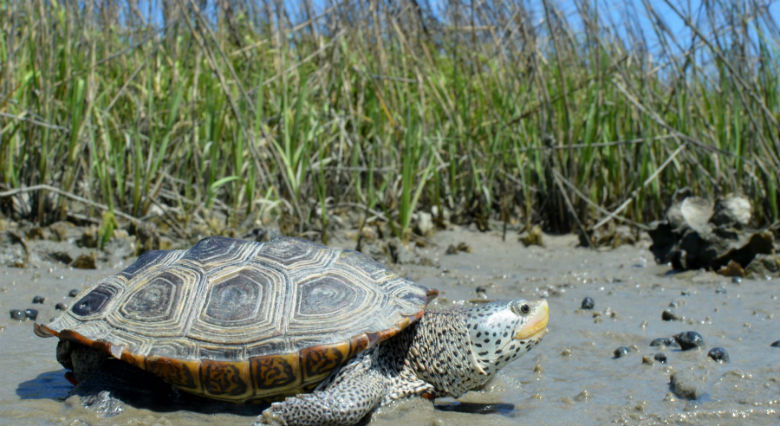 A diamondback terrapin slowly slops through the mud of Masonboro Sound. Named for the diamond-shaped growth rings on its top shell, the terrapin is native to the eastern and southern United States. Photo: Tess Malijenovsky

WILMINGTON — Weaving through Masonboro Island by kayak or sometimes wading knee-high in mud, Leigh Anne Harden looked for diamondback terrapins, the only North American turtle adapted to the coast’s high-salinity marshes, creeks and sounds. But the little turtle may be in trouble.

No one really knows, but Harden hopes all that poking around will lead to answers and possibly some solutions. She’s a graduate student at the University of North Carolina-Wilmington, and her research on this turtle that’s native to our tidal wetlands is the first of its kind at the university. It will likely play an important role in revising the state’s management plan for blue crabs.

The crabs and the terrapins are connected in a way. Terrapins crawl into crab pots lured by bait or other terrapins. Once in the wire traps, the terrapins can’t escape and drown. While a terrapin can likely go months without oxygen in their winter state of dormancy — also known as overwintering — they can drown in as little as 45 minutes in the summer under stressed conditions. This makes “ghost” pots — or abandoned crab pots cut loose during a storm — particularly deadly.

Diamondbacks (Malaclemys terrapin) were once so abundant in North Carolina that they were considered a nuisance. Fishermen were sometimes unable to haul catches because of the weight of terrapins caught in their nets. But by 1920, the terrapin was a much sought-after gourmet item, costing $90 per dozen. The market boomed and farms were established, notably in Beaufort, to breed the species in captivity. After World War I the market declined because the wild populations were over-harvested.

Though not endangered, the diamondback terrapin today is listed both state and federally as a species of “Special Concern.” Because of this status within the state, a special permit is required to possess or collect this species. Loss of habitat and mortality from incidental capture in nets and crab pots pose the greatest threats to terrapin populations.

If the terrapins’ interaction with crab pots is an issue needing regulation, the N.C. Division of Marine Fisheries will need to amend its Blue Crab Management Plan to protect the species. UNCW is leading the research in determining whether or not their populations are truly in decline.

Little was known about our local diamondback terrapin populations before Harden joined Amanda Southwood Williards’ research lab in 2008 for a doctorate degree in marine biology. Her studies monitored terrapin movements and uses of their habitat, their overlap with blue crab fisheries and their seasonal behavior and physiology.

“We didn’t know that much about what habitats terrapins were using, where they were congregating for breeding aggregations, or where they were overwintering. We had no idea,” said Harden.

New to the area, Harden teamed up with the Division of Marine Fisheries and local crabbers who knew the waters best. “Turtle conservationists and enthusiasts can scare crabbers by wanting strict and immediate management and regulation,” Harden said.

Some crabbers, however, like local Jeff Wolfe, want to learn more about where terrapins are and how they can be avoided. “Crabbers don’t want to catch terrapins,” Harden said. “They’re a nuisance in the crab pot.”

After catching terrapins by using seine nets to rope off areas of Masonboro and Figure Eight islands, Harden attaches a data-logger the size of a stack of dimes and a radio tag to the back of each turtle’s carapace, or shell, using epoxy. Remote sensing with the data-loggers records the temperature of the carapace every 30 minutes, which gave Harden an idea of where the terrapins were—the water, the mud—when she wasn’t in the field.

Still, three to six times a week in the summer Harden kayaked through the marsh, patiently awaiting the small, camouflaged head of a terrapin to pop out of the water for air. Like a fingerprint, each terrapin shell is unique in its color variation—black, blue, green, brown, spotted with white necks. Using radio telemetry, she carried a bulky receiver to dial into each turtle’s location like a radio station that plays a series of beeps.

The diamondback terrapins at her sites are most active from early April to October. In the winter when terrapins aren’t eating, they’re not necessarily attracted to a crab pot even if it’s nearby. In the spring however, when waters warm up about 60 degrees in April, the risk of interaction with crab pots is at its highest. Crabs are moving back into shallow water to molt, and terrapins in the same location are foraging after a long period of overwintering.

Diamondback terrapins often stay in one tidal creek their whole lives, which is why populations in a specific tidal creek can be wiped out with one precariously placed crab pot. Being that terrapins exhibit sexual dimorphism with females weighing three to four times more than males, crab pots can alter the sex ratio of terrapin populations by catching mostly males and juveniles.

In 2010, Harden and Southwood Williard received a grant from the N.C. Sea Grant Blue Crab and Shellfish Research Program to send out an anonymous post card survey to commercial fisherman in 10 coastal counties soliciting basic information about crabbing and diamondback terrapins.

“We were trying to get a better idea of not just Figure Eight and Masonboro, but an idea of where terrapins are along the coast based on where crabbers had seen them,” Harden said.

Although only about 11 percent of the surveys were returned, the Division of Marine Fisheries combined the results with their past aquatic sampling studies to create a map of interaction hot spots.

“Here in the southern part of the state is where I think the majority of these interactions are going on,” said Stephen Taylor, a division biologist.

Yet many other areas along the coast aren’t experiencing any interaction problems, he said, making statewide management a challenge.

“A lot of the guys don’t think it’s a problem,” said Taylor. “Most of their pots are in deeper water and they don’t have interactions. The ones that are here know that there are terrapins around, especially on the Cape Fear River, but they know how to avoid them as far as putting their pots in deeper water and certain distances away from the shoreline.”

Some of the possible management approaches suggested for the Blue Crab Management Plan amendment include the required use of terrapin Bycatch Reduction Devices, restricted pot areas based on depth or distance from shore, additional diamondback terrapin awareness and educational programs for the public, or a combination of those listed.

More research is needed before any suggestions can be turned into regulations. “We can’t say right now that the populations in this area are declining. We just don’t know enough,” said Harden.

Continuing the research this summer will be Stephanie Chavez, another UNCW graduate student under Southwood Williard. She will be testing different dimensions for the devices that keep diamondback terrapins out of the crab pots without significantly reducing blue crab catch.