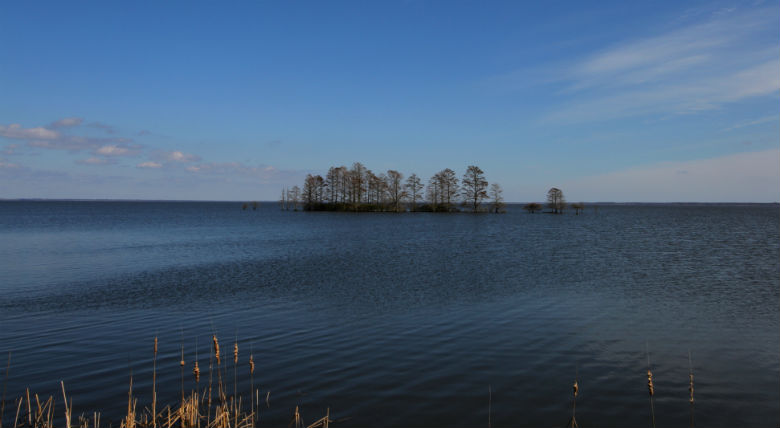 At 40,000 acres, Lake Mattamuskeet is the largest natural lake in North Carolina. It would be much larger had there not been various attempts through the centuries to drain it.

We can’t do this without you!

SWAN QUARTER — U.S. 264 cuts through the broad peninsula between Albemarle Sound and the Pamlico River. This is the low country of the North Carolina coastal plain, and the open terrain on both sides of the two-lane blacktop is as flat as both sides of a pancake.

During the winter, this land is the Serengeti of North Carolina.

Instead of wildebeest, the watery landscape draws waterfowl. Hundreds of thousands of geese, swans and ducks are attracted to the alluring lakes, marshes and wetlands. In Hyde County, a large 14-mile-long, five-mile-wide lake is the destination for many of these birds.

As I near this lake, an ancient memory is triggered by a sharp curve in the highway. At this spot, during frequent trips down this road to high-school sporting events, my coach would always point out a large oak tree that had blown down in a storm. Even though the tree was on its side, many of the roots were still firmly in the soil providing life to the branches on the upper side of the massive trunk. Utterly amazed, I saw that the much decayed trunk was still there with live branches reaching strong into the air.

I turned off of U.S. 264 and onto N.C. 94, and the lake soon comes into view. I immediately see American coots, cormorants and Canada geese everywhere. Overhead on a utility wire, a kingfisher stares intently into the water while a nearby kestrel is devouring a freshly captured field mouse. Down the entire length of this causeway, numerous great blue herons and great egrets stand tall and erect like sentinels guarding the lake.

Lake Mattamuskeet, at 40,000 acres, is the largest naturally formed lake in North Carolina. How it formed is still a matter of debate. Some scientists think that the lake is an impact crater from a meteor strike while others insist that the lake depression was created by a fire that burned deep and consumed the rich, peat soil. The fire theory is supported by an Algonquin Native American account that tells of a fire that burned for 13 moons and the resulting 120,000-acre basin was filled with rain water and soon after was teeming with fish and waterfowl.

During this era, the lake was known as Paquippe by the Natives and was two-thirds larger and a bit deeper than the lake we see today.

A European expedition stumbled across the lake in 1585. The explorers included John White, an artist and mapmaker whose depictions of early North Carolina are now famous. His map of the coast clearly identifies the lake and its name as Paquippe.

The encroachment of the European settlers eventually created open hostilities with numerous Native American tribes along the coastal plain. This eventually led to the Tuscarora War in 1711, which ended four years later after many battles and much bloodshed. The remaining Native Americans fled or were sent to one of the first established reservations along the shores of the lake.

It wasn’t until 1733 that a map of the Province of North Carolina prepared by the Surveyor General Edward Moseley, that the lake took on the current name of Mattamuskeet. This name is interpreted as a native word meaning “a moving swamp.”

Many of the remaining Mattamuskeet Indians, also known as Arromuskeet, sold their reservation lands to the settlers and by the late 1760s, the reservation was no more.

Amazingly enough, there was a period of time when the lake didn’t even exist. There have been a number of schemes over the years to drain the lake and farm its nutrient-rich bed. The colonial governor vetoed once such idea in 1773. More than six decades later, in 1837, the state even financed the digging of a seven-mile-long canal to drain the lake into Pamlico Sound. The idea was to sell off the resulting farmland to pay for needed public education programs. Much of the lake is below sea level though, and after all the digging, 55,000 acres of water remained.

Draining the lake then became an obsession. In 1909, the state General Assembly created a drainage district. Within two years, close to 130 miles of canals were etched into the lake bed, directing water to four gargantuan steam-driven pumps. The building that housed it all was the largest pump house in the world at that time.

By 1932, three different companies reaped various degrees of success in harvesting the fruits of this rich land. The ground was tilled for corn, wheat, oats, sweet potatoes and soybeans while houses, an inn and support services were built on the reclaimed land. High operating costs, lack of coal, empty wallets and even the mosquitoes helped to doom each effort.

After the pumps were turned off, water trickled back in and a 40,000 acre lake reappeared. Due to the large outfall channel along with the associated canals, the hydrology of the lake was forever changed and the lake would never revert to its original size.

By and by, the lake became property of the federal government and was designated as the Mattamuskeet National Wildlife Refuge in 1934. Another 10,180 acres of the refuge consists of forested wetlands, fresh water marsh, uplands, croplands and impoundments.

This habitat diversity attracts a lot more than waterfowl. More than 200 other species of birds have been recorded at the refuge. Mammals such as black bear, river otter, deer, bobcat, mink and the red wolf make a living here as well as 31 species of snakes, four of the poisonous kind. There are close to 800 species of birds and animals here.

This is my kind of place.

After I cruised down the N.C, 94 causeway, I headed east on Wildlife Drive, which is bordered by a canal and one of the impoundments. Along the canal, hundreds of yellowbelly sliders were clinging to the steep bank, crawling over one another to find a spot in the warm sun. Out in the impoundment, a number of northern shovelers and pied-billed grebes were clustered within the rushes seeking protection from the wind. 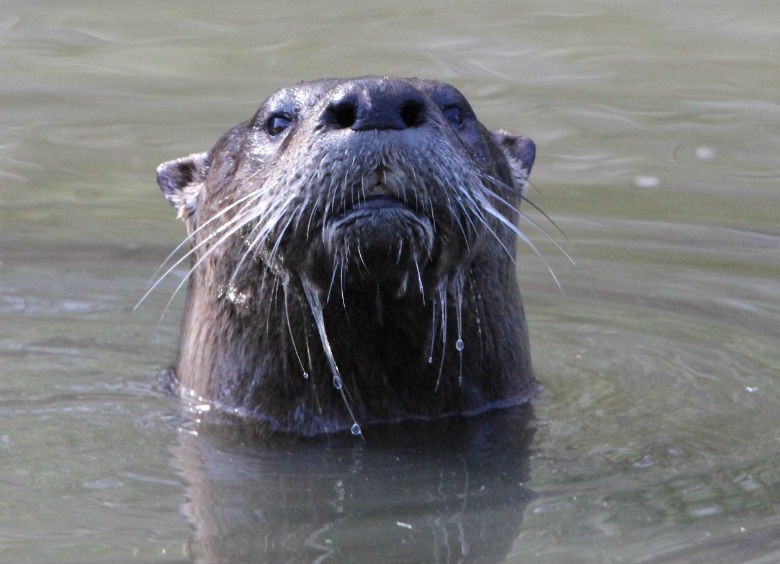 A river otter snorted his displeasure at Sam’s intrusion and then struck this defiant pose.

As I moved along, I spotted what I thought was a cormorant perched with open wings on a dead snag hanging over the canal. But the silvery back and spear-like bill differentiated this bird from the cormorant as an anhinga. I have never seen an anhinga, so this was pretty cool. It then seemed to take a bow and then launched into a short flight over the canal before landing on the water. Its body quickly sank below the water with only its head and long neck protruding. It glided along the water and demonstrated why it is also known as the “snakebird.”

Wildlife Drive ended at the refuge office, which is also near the old pump house. In 1937, the Civilian Conservation Corps renovated the structure into a hunting lodge which operated until 1974. Environmentalist Rachel Carson stayed at the lodge for a brief period while preparing a booklet on the lake. Her enduring memory of the lake was “the constant, haunting music of the geese.”

This historic building is on the National Register of Historic Places and is managed by the N.C. Wildlife Resources Commission, which hopes to reopen the building as a museum and lodge.

From here, the Outfall Canal stretches from the pump station to the Pamlico Sound. Other canals were also cut to drain the lake into the sound. These canals allow blue crabs to swim all the way up to the water control structures at the lake where crabbers are waiting with chicken necks baited onto strings. The lake is well known for its monstrous sized blue crabs.

From the lodge area, I drove over a short bridge to head down a couple of the refuge access roads. Almost all of the roads here will parallel a canal; I kept glancing at the canal and soon saw that something was creating a wake in the water. I hopped out of the truck and ran down to the edge of the canal and waited. A brown head with big nostrils and threaded with large whiskers silently rose out of the water and was staring straight at me. The animal then let out a series of explosively loud snorts that indicated much displeasure with my presence. Startled, I jumped a bit as a river otter dove back under the cloudy water. It continued to surface and snort until I felt unwelcomed and I even said out loud “OK, I’m leaving.” I saw the otter dive under the water one last time and I could follow a long line of air bubbles popping onto the surface as it retreated way down the canal.

This shallow lake has long been a productive source of the submerged aquatic vegetation necessary to sustain the thousands of waterfowl that overwinter here. However, there is some concern that the abundance of these plants is diminishing. The eastern half of the lake supports mostly submerged vegetation while the western half is more turbid and yields mostly algae. This curious unique situation has piqued an interest in scientists to monitor and research the lake for clues. Past and current water quality monitoring is being analyzed to determine the relationship of water quality and the decline of the aquatic vegetation. This will help establish land use and watershed management practices that will hopefully keep the lake functioning as a vibrant ecological community.

Back on the move, I drove down one of the long access roads that terminates at a short hiking trail. The trail provided great views of the forested wetlands that are dominated by bald cypress trees. Reaching up in the water around these trees are “knees” that are part of the root system of the tree. Cypress knees were once thought to provide oxygen to the tree; however scientific research has been unable to fully confirm this theory. It is more likely that the knees provide anchoring stability in the wet soft soil.

It was time to head home and I slowly made my way back down the narrow tree lined road. A bald eagle glided over at tree top height then dropped down low over the gravel road bed just ahead of my vehicle and sailed along as if in a canyon. I followed behind the eagle for about a mile until it finally gained altitude and flew above the trees and out of sight. 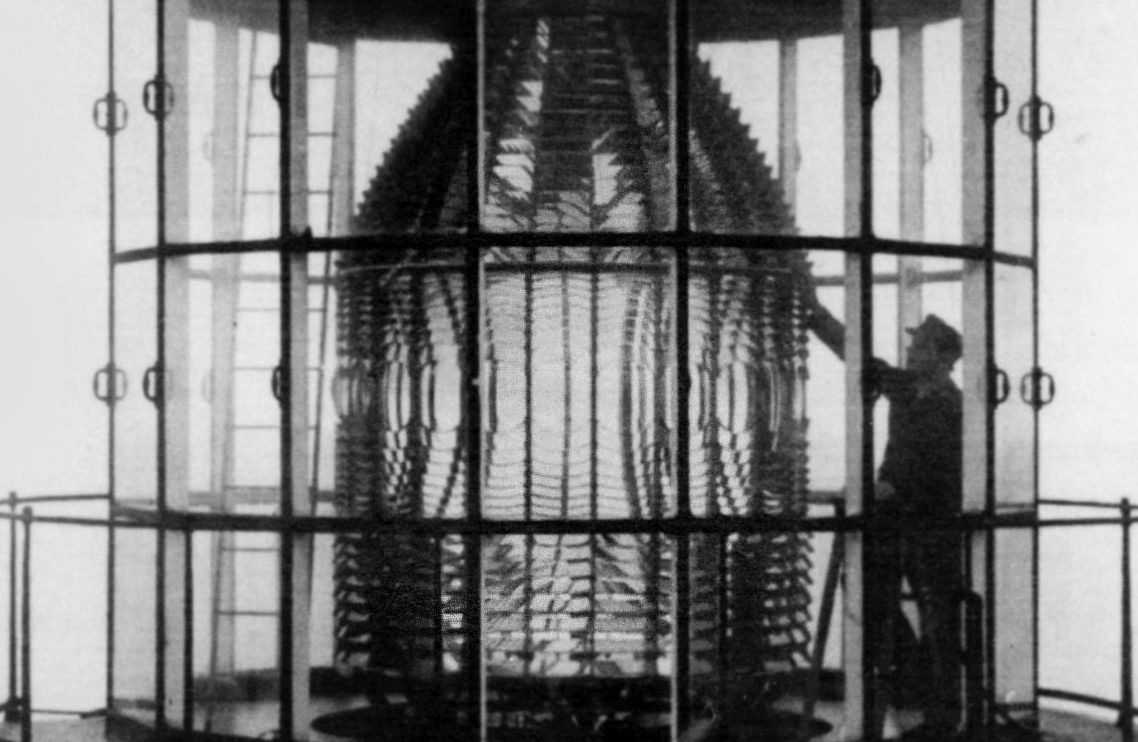 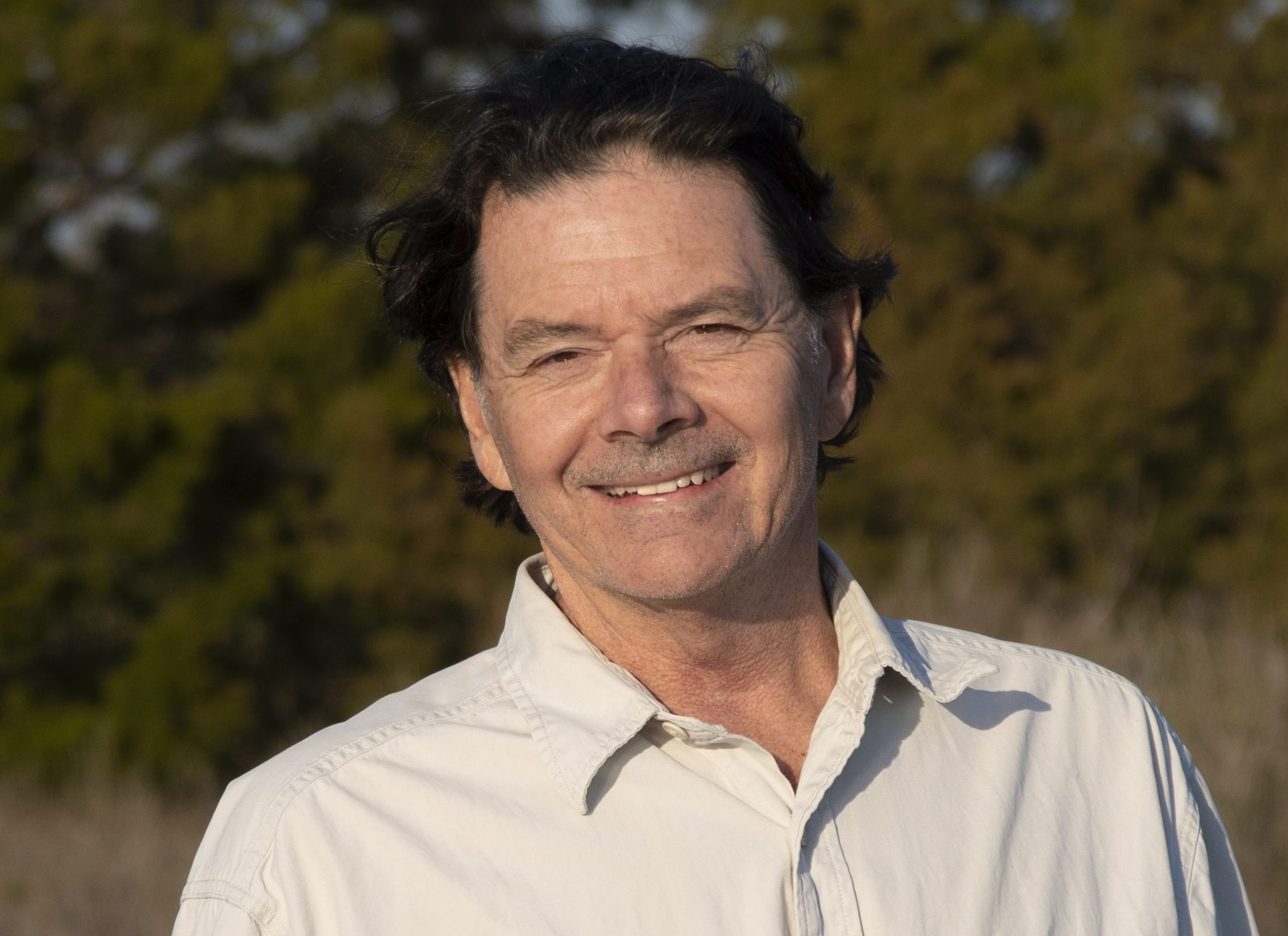 Walker Golder Recalls His ‘Oh Wow!’ Summer
Support the coastal news you value.CoastalReview.org is an award-winning, nonprofit news service providing unbiased, in-depth and investigative reporting about issues on the North Carolina coast. Your support makes our work possible. Please join the CRO Press Club or put your business in the Sponsor Spotlight to support the coverage your care about. Learn MoreGive or Sponsor