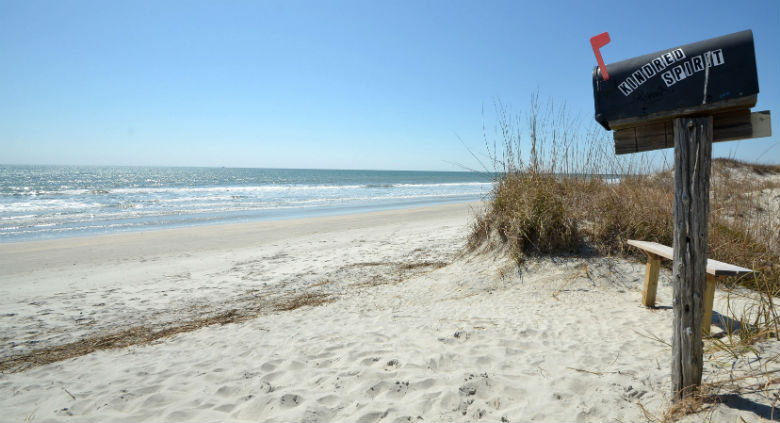 Thousands of people have walked the beach to the end of Bird Island to leave their most cherished thoughts in the notebook of the “Kindred Spirit” mailbox. Photo: Tess Malinjenovsky

SUNSET BEACH – A crowd of people will gather here on Friday in a celebration of sorts for a very special place.

They’ll come to dedicate a kiosk that is yet another benchmark in the preservation of Bird Island.

It was a crowd of a different sort, though, that Bill Ducker remembers. It was more than 20 years ago. People packed the small room where the Sunset Beach commissioners where getting ready to vote to rezone Bird Island, an uninhabited island that was at the time separated from the town by a small, meandering inlet.

The family that owned the island wanted to build a mile-long bridge from Sunset and begin developing their land. The town commissioners first had to approve the plans by rezoning the island.

“I was there,” recalls Ducker. “I’d never gotten up in front of a group of people and spoken. All of a sudden I just felt compelled to say something. I raised my hand, I said, ‘Wait a minute. Do you know what you’re doing’?”

“Mr. Ducker the time for public comment has passed,” the mayor said.

“But wait a minute, you don’t know the scope of what you’re doing,” Ducker retorted.

The mayor became irate. “Mr. Ducker,” he said, “if you don’t shut up”—and those were his words, Ducker promises—“I’ll have the chief of police throw you out.”

Ducker knew that the chief could never reach him in that crowded room and so he persisted with his question again and again.

The crowd began to murmur and the people said, “Well, let’s hear what Mr. Ducker has to say.”

The meeting that night in 1992 sparked the fight to save Bird Island, which ended 10 years later in one of the great conservation victories in state history. The island’s almost 1,500 acres are now preserved as part of the N.C. Coastal Reserve.

Another step in the long process of salvation comes Friday when the Bird Island Preservation Society – the group Ducker and other advocates formed to save the island — dedicates an educational kiosk at 11 a.m. in the gazebo parking area of Sunset Beach. The dedication comes a little more than 10 years after the state found the money to buy Bird Island.

The kiosk will consist of four signs. One tells the story of the fight to save Bird Island. Another describes the shore and marsh birds that make the island important for endangered piping plovers, rare painted buntings, common terns, great blue herons, white ibis and black skimmers. The third sign identifies the variety of plants on the island, like the sea oats, wax myrtle and saltmeadow cordgrass, and the last sign describes the various sea turtles that nest on the island between May and August.

But there would be no signs about birds and marshes if Bill Ducker hadn’t spoken up that night.

You can see Bird Island from the deck of his house, across the marsh teaming with the avian life that gives the island its name. It was the right place for the Sunset Beach residents who cherished Bird Island to come together and find a way to save it. Guided by the N.C. Coastal Federation, the small group of residents formed the Bird Island Preservation Society. There in Ducker’s house the group stuffed envelops asking every property owner in Sunset Beach to join their society, to write letters to legislators and to contribute what they could.

“I can’t even imagine an America that we have so altered that there is no piece of it left that is like it once was,” says Sue Weddle, one of the original members of the Bird Island Preservation Society. “You realize it’s your backyard. And if you don’t protect it, nobody’s going to.”

The mailing response was great at first, but when enthusiasm dwindled Frank Nesmith came up with an idea to lead folks on walks along this last bit of North Carolina sand. “I figured if you can get them to go walkin’ out there to Bird Island they’ll fall in love with it,” says Nesmith.

Being a permanent resident since 1975, Nesmith has a story or two to tell like the one behind the mailbox on Bird Island named the “Kindred Spirit.”

“My idea always was that anyone that’d go through the trouble to get to the thing loved nature and loved the spirit of the coastline,” he explains. “The people that visited the “Kindred Spirit” mailbox were the kindred spirits.”

Walking south from the last beach access, it takes about 30 minutes to reach the mailbox that Mr. Nesmith planted over 30 years ago. The trek away from civilization invites the pilgrims into silence as the rush of waves washes over their thoughts. Sandpipers scurry by the sea foam and larger birds soar along the sanded cliffs as the sun wraps the body in warmth. Sitting on its crooked wooden beam in the dunes is the black mailbox with pencils and a few notebooks inside carrying messages from the “kindred spirits” that have visited. One entry writes:

“Dear kindred spirit, returning to this peaceful place for the first time since last winter. It’s been a difficult year for us at home in Ontario. Only the thought of returning to the beach gave us hope and comfort. And now the eternal rhythm of wave and tide, sunrise and sunset puts all our struggles in perspective. It truly restores the soul. Jean B.”

Others also give thanks: “Walked to the beach again. Found one sand dollar. It doesn’t get any better than this! Dan Berry.”

The number of people accompanying Nesmith on his walks to save the island kept doubling until over 150 joined. Membership to the society grew by the thousands. They came from all over the country.

The N.C. Coastal Resources Commission finally rejected permit for the bridge in 1996 and suggested that the state find a way to buy the land. The Bird Island Preservation Society along with the federation, the N.C. Coastal Land Trust, the National Audubon Society and the N.C. Department of Environment and Natural Resources worked together to keep Bird Island safe once and for all; and in 2002 the state acquired the island for $4.2 million with funding awarded by the state’s Clean Water Management Trust Fund, the Natural Heritage Trust Fund and the N.C. Department of Transportation.

Aside from its natural significance in terms of rare bird and plant species, the reserve protects the genetic diversity and evolutionary processes that allow scientist to learn more about our world. As increasing populations and demands of coastal real estate pressure natural coastal ecosystems, undisturbed barrier islands like Bird Island will become “controls” for scientist studying issues of water quality, hydrology, storm damage and exotic specie invasion in adjacent developments. They are irreplaceable outdoor laboratories for coastal management research and decision making for future generations. Also when visitors can visually contrast an undisturbed island to a developed one, they gain a better understanding of how the world is changing.

And Bird Island will continue to be a place where people can take lonely walks down a deserted beach to an old mailbox in the dunes. There in a dog-eared notebook, they can share their more cherished thoughts and longing prayers.