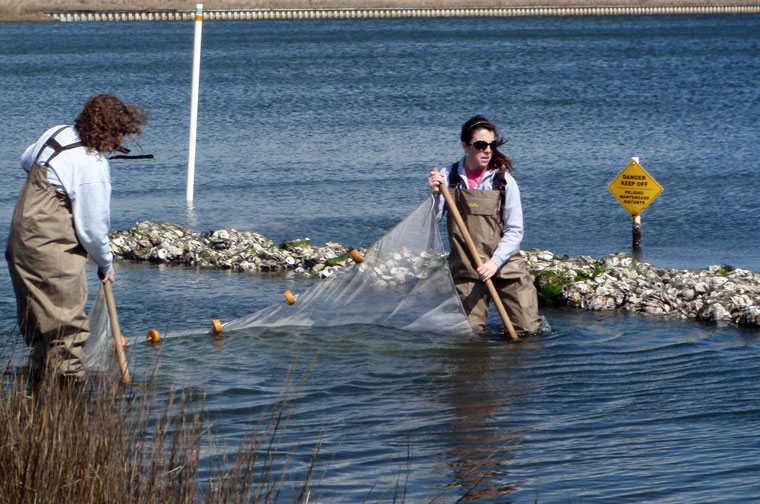 Katie MacLellan, left, and Carissa McHone of Wingate University pull a seine net near an oyster reef in Stump Sound as part of ongoing monitoring of these created reefs.

By Ladd Bayliss and Skip Maloney

NAGS HEAD — When most college students envision spring break, rarely do ideas of filling and schlepping oyster bags around a desolate sand dune in North Carolina dance through their minds. They dream of Cancun and Fort Lauderdale, frosty cocktails and sun-drenched beaches. The goal is to return to campus with just the right amount of tan that begs the question: “Where did you go for spring break?”

That’s what most college kids do. Not these college kids from Austin Peay State, Wingate and East Carolina universities. They decided to give back instead.

Thirteen students from Austin Peay in Clarksville, Ten., spent a week recently volunteering to help restore the Bodie Island Lighthouse and teaming up with Jockey’s Ridge State Park and the N.C. Coastal Federation on a living shoreline project at the park.

While the Austin Peay students worked at Jockey’s Ridge, nine students from Wingate, which is near Charlotte, pitched in at the federation’s Clean Water Preserve at Morris Landing on Stump Sound in Onslow County and monitored oyster reefs near Surf City. Meanwhile, students from East Carolina were shoveling oyster shells into mesh bags to create reefs near Jones Island in the White Oak River.

More and more students are foregoing the usual vacations in the sun for these types of “alternate spring breaks,” notes Ted Wilgis, one of the federation’s coastal education coordinators. More colleges are offering students the alternative and more groups like the federation are providing them with meaningful things to do, he said.

“I’ve been impressed by the students’ knowledge and awareness of the greater world around them,” he said.  “It’s exciting to see them becoming aware of a whole suite of issues and trying to become active in them.”

The Austin Peay students first heard about the trip late last fall, when Alexandra Wills, the assistant director for service and civic engagement, began pasting the school hallways with flyers. A native of Southern Pines, Wills was excited about the prospect of designing a service trip on the Outer Banks.

“My grandfather is from Ocracoke, and I have always loved this place,” she said. “Finally, I had the chance to pick a trip destination where I would know where we were going without a GPS – there’s only one road in and one road out.”

Once interest about the trip was sparked among the student body at the university, students went through an intense application and interview process. Although the 10-day trip mostly consists of manual labor and defined schedules, students were only required to pay a $60 fee to go on the trip. The school was able to pitch in on several other expenses, including a hang-gliding trip for a few of the trip participants.

“I love volunteering,” said Lyddia Claire Wilson Lyles, an Austin Peay senior. “Being able to meet and work with different types of people from my school, who all come from all different regions and walks of life – that’s pretty special.”

At universities like Wingate, there is a faith-based component to these alternative break programs. Founded in 1896 by the Baptist Associations of Union County in North Carolina, and Chesterfield County in South Carolina, Wingate has a strong history of service to its surrounding communities, which, though the university is no longer affiliated with the Baptist Association, continues to this day.

For Alex Yarborough, a sophomore in the school’s pre-pharmacy program, the service that she and her classmates provided for the federation was an extension of her upbringing. “Most of us are involved with student ministries on campus,” she explained. “We all have strong family backgrounds, and most are involved in our churches at home.”

Wilgis kept the Wingate kids busy while they were in Wilmington. “We always have a range of tasks to do,” he said, “and we’ll normally organize a particular volunteer day around certain tasks, initiatives or projects. What we did with this group was to combine or condense several projects into a week-long time frame; took a bunch of different things and put them all into this one week to make it work.”

The students cleaned up at Morris Landing and then helped third graders at Alderman Elementary School in Wilmington maintain their rain garden. They bagged oyster shells and marl at Waterway Park in Oak Island and looked for signs of life at oyster reefs the federation has built.

Sitting in the grass at Sound Side Park in Surf City, the students compiled data from four artificial reef samples that Wilgis had labeled and brought in from Spicer Bay and Old Settlers Canal. They were up to their elbows in dark, muddy water, pulling out algae, oyster shells and anything else they could find to record the growth of life on the artificial reef samples.

They counted and measured – live oysters, shrimp, and barnacles – and tallied their find on data sheets. Wilgis would use the information to measure the progress of the artificial reefs. When they were done, the students joined Wilgis on the Federation’s flat-bottom boat and returned the samples to their homes on the reefs.

“I liked the fact that we were doing different things every day,” said Shannon Fennimore, also a pre-pharmacy student. “It was very educational.”

The Austin Peay students also kept busy. Although the weather wasn’t ideal at the start of their week, temperatures rose and the wind diminished to make the work more enjoyable. No matter the weather, though, it seemed the volunteers weren’t easily deterred, especially senior Keith Winn.

“I’ve lived in Clarksville all my life, and this was my first time swimming in the Atlantic Ocean,” said Winn, who studies accounting, finance and real estate. “I can’t explain to you how cold the water was, but it was worth every second.”

In Their Own Words

Here’s what some of the Wingate University students had to say about their week volunteering on the coast.

Shannon Fennimore: This was my first experience working with the North Carolina Coastal Federation. I am now well informed on the problems facing the preservation of our coasts and also the role we play as citizens to help fight for this cause… Some of these issues included pollution, mainly from stormwater, destruction of the wetlands, and possible degrading of the coastal environment as a whole…Not only did we learn a lot about our coast and the species that inhabit them.

Jordan Hartman on working at the Alderman Elementary rain garden: I learned that Wilmington’s coastal environment encompasses more than just the sand and water. Land and water on the coast and even hundreds of miles away can affect the well-being of the coast, which is the concept that we shared with the third graders. Mia, a 10-year-old lover of butterflies and flowers, lit up with joy as I handed her an Echinacea (Joe Pye Weed) plant to add to her school rain garden. “Plant, I give you birth and energy,” she proclaimed as she patted the surrounding dirt after planting it.

Today we did a lot of hard work, cutting mesh bags and putting either marl or oyster shells in them. Although we were working hard, we also learned a lot. Ted (Wilgis) explained to us exactly how these bags will make a living shoreline to help prevent pollution and erosion. He also explained other interesting things, like how marl sometimes has fossils, and he even showed us a few.  He also found a jellyfish, and I got to hold it. Another thing I learned is how much work goes into all of this. Not only are the bags really heavy to carry and shovel, but the oyster shells are very difficult to even get in the shovel.

Alex Yarborough on oyster reef monitoring in Stump Sound Today was by far the most incredible day so far. We started off the day by learning about the life cycle of an oyster and the surrounding organisms that inhabit oyster beds. We learned that crabs, snails, different species of fish, and shrimp all coexist with the mollusks. Ted went out earlier that morning and collected four samples from the created reefs in local bays and canals… We found two mud crabs, shrimp, a couple of fish, a ton of worms and barnacles… Once lunch was finished, we all piled into the boat and headed to return the oysters to their natural habitat… Once complete, Ted took us to an open oyster bed and we, if we were brave, got to try raw, fresh oysters. I was extremely excited because they are my favorite food.

Annita Best has a BS in journalism from Culver-Stockton College in Canton, MO, and a MBA from Boston University. She has lived in coastal North Carolina since being stationed here in 1987. She is currently a colonel in the Marine Corps Reserve.