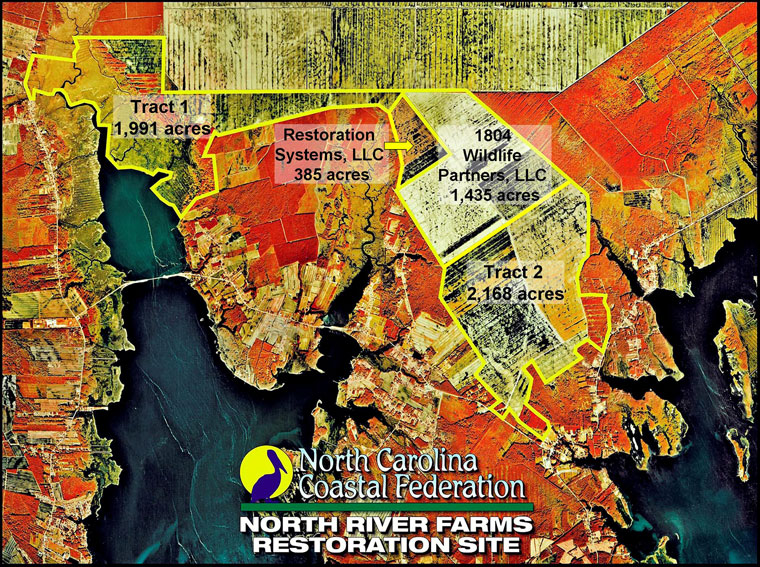 The map show the acreage at North River Farms in Carteret County that the N.C. Coastal Federation and its partners bought. The tracts marked 1 and 2 are own by the federation.

The N.C. Coastal Federation and a dizzying array of partners are restoring hydrology and wetlands on thousands of acres of ditched and drained agricultural land at two large-scale projects along the state’s coast.

Through these projects, multiple generations of farmers, fishers, business people, government officials, scientists and conservationists are revisiting the way they work the land, realizing that wetlands serve valuable economic and environmental functions as reclaimed wetlands restore and ensure the productivity of coastal fisheries, farming and hunting.

Jan Deblieu described the work in Hyde County in two articles a couple of weeks ago. Here’s we’ll focus on the other large-scale site, North River Farms in eastern Carteret County.

Much of the land east of Interstate-95 in eastern North Carolina is wet. These wetlands are characterized by bottomland hardwood forests, “swamps on the hill” that the Native Americans called pocosins and brackish and saltwater marshes that fringe 2.1 million acres of coastal estuaries. These wetlands are home an astounding variety of wildlife: black bears, ducks, geese, swans, wading birds, shorebirds, raptors, red-cockaded woodpeckers, river otters, American alligators, red wolves, deer, raccoons, rabbits, snakes and neo-tropical migrating birds. They also support numerous species of plants – many that are considered endangered or threatened – and extremely productive marine fisheries that depend upon a delicate balance of fresh and salt water.

Over the past three centuries, much of the land in eastern North Carolina was progressively ditched and drained to promote intensive farming, forestry and other land uses. As the acreage of wetlands declined, so did the wildlife and fisheries that depended upon these habitats as shelter and for good water quality.

The federation is focused exclusively on promoting the health of the coastal environment and economy. In 1999, we began to work on a large-scale wetland restoration project, at North River Farms, aimed at restoring hydrology on drained farmlands. The restoration project is strategically located to benefit coastal water quality and fisheries habitats, such as oyster reefs.

The goal of the restoration project is to replicate, as much as possible, historical hydrology to improve the water quality of adjacent coastal waters. Restoration work for both farms involves continued meetings with stakeholders for design approval, obtaining permits, securing contractors to plug or fill farm ditches, contouring land, creating impoundments for peak flow mitigation, planting thousands of trees and shrubs and installing water-control structures. The project will redirect pumped agricultural drainage from being directly discharged into the prime shellfish waters of North River, Ward Creek and Core Sound into newly restored wetlands that will retain, filter and provide natural treatment of the runoff.

Oyster landings had dropped dramatically in the state over the past 100 years. Loss of wetlands and declining water quality are among the major reasons for these declines. Promoting healthy oysters by restoring wetlands encourages enhanced water quality two ways: The quality, volume and rate of runoff into estuaries is conducive to oyster growth, and each oyster in more productive oyster reefs filters and cleans up to 50 gallons of water each day as it feeds.

The project is also a hive of research activity. At least three generations of faculty and students from the Department of Biological and Agricultural Engineering at North Carolina State University have started and continued their careers at the project site. In the beginning, they worked with landowners to devise drainage methods. Now, they are testing the most efficient and cost-effective wetland restoration methods. One of our main restoration design engineers, Dr. Mike Burchell, has published extensively about his work at North River Farms and funded multiple graduate students. Faculty and students at Duke University’s Marine Laboratory can say the same–one professor, Dr. Bill Kirby-Smith, has monitored water quality there for more than 15 years.

Research at the Farms

The 6,000-acre North River Farms serves of the headwaters for several tidal creeks that drain into Core Sound. The federation started the project in 1999 when it bought 1,991 acres of the farm. Then in 2002, we bought another 2,168 acres. The federation paid $4.1 million for the land with grants then-new N.C. Clean Water Management Trust Fund. We then worked with partners to secure the rest of the farm in 2002: An environmental restoration and mitigation company bought 386 of the remaining acres and a private hunting club purchased 1,435 acres.

Since that time, 3,426 acres have been restored and preserved as fresh, forested and tidal wetlands and tidal streams. The remaining land will be restored in the next few years as farming operations phase out on the final acreage of the farm. About 1,750 acres of the farms have been placed under easement by the Natural Resources Conservation Service’s Wetland Reserve Program, and another 2,100 acres of the farm will be under the program’s easement this year.

N.C. State research at North River Farms will continue through this year with money from a grant from the U.S. Environmental Protection Agency.

The federation is also partnering with the U.S. Geological Survey and scientists at N.C. State and Duke University to measure how much carbon from greenhouse gas emissions is being taken up by the plants in our restored salt marshes. It will be the first attempt to measure what effects the restoration of wetlands at the farm might have on climate change. Salt marsh plants, like all plants, take up or “sequester” carbon dioxide from the atmosphere during photosynthesis, converting it and water to sugar and oxygen. According to a United Nations’ study, salt marshes, along with seagrasses and mangroves, are among the most significant carbon “sinks” on earth, capturing and storing carbon emissions equal to about one-half of the carbon dioxide emitted each year by global transportation sources. This new research and partnership will measure greenhouse gases released from the soils at the restored North River Farms site and will relate these measurements to salinity, vegetation type and the global carbon budget. This work will provide data on carbon sequestration in restored salt marshes that have previously been omitted from national evaluations of carbon sequestration and greenhouse gas emissions.

Partners and Strange Bedfellows: The More, the Merrier
The federation has discovered that once one agency signs on, other agencies’ interests will be piqued. Everyone likes to be part of a successful project, and a vote of confidence from one provides reassurance. After the project reaches a certain critical mass, the funding and funding sources snowball. These projects benefitted from funds from dozens of federal, state, local, and private groups (see accompanying story for details).

Getting Partners Onboard
Demonstrating how your project meets an agency’s mission, trust resources and other partners’ goals is critical to getting partners onboard. For instance, habitat for migratory birds in an important flyway brings in a program of the U.S. Fish & Wildlife Service and the Albemarle Pamlico National Estuary Program. The quantifiable water quality benefits bring in EPA and the Clean Water Management Trust Fund. The restoration itself brings in the Natural Resources Conservation Service’s Wetlands Reserve Program and Restore America’s Estuaries and others.

For the farmers, the restoration meets multiple goals, too: it builds in “breathing room,” allowing them to get out ahead of regulation of the runoff many of them anticipate producing. The work helps prevent the saltwater intrusion that is poisoning their fields as time progresses. The restoration also provides supplementary income from selling the conservation easements and performing the restoration that  partners pay for. 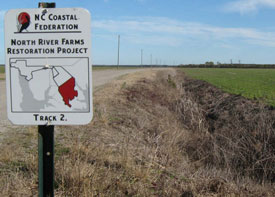 Once people start hearing about the projects, momentum builds. The work has garnered substantial in-kind resources in owner donations and volunteer sweat equity, sometimes multigenerational. At North River, one volunteer has passed his love of the project on to his daughters.

Eric Pake’s first job out of high school in the 1980s was to help drain and clear the farm. Later, as an adult, he took up fishing and watched over time as water quality and catches declined in the North River and Ward Creek. When he discovered that the federation and our partners were restoring the farm to improve water quality, he was one of the first to sign up to help. He’s driven tractors, planted trees and done all manner of other work and has gotten his two then-teenaged daughters involved as well. Pake also reports that both fishing and oystering have improved in the six years of restoration. And that indeed may be the case: in 2007, the state agency charged with monitoring the health of shellfish for harvest reopened to shellfishing 124 acres of North River adjacent to our restoration work.

Relationships and Mutual Trust Must Develop Over Time

Be prepared for project timelines measured in terms of decades, rather than months or years. This scale of restoration requires patience and persistence on everyone’s part. Once the relationships are there, the strangest bedfellows can become one’s biggest and most effective advocates. The farming and the environmental communities have often been at odds in North Carolina. We have managed to overcome that history.

The sources of bacteria that contaminate the coastal waters have always been there, and they (birds and other wildlife) are not going away, at least not in any way that would not cause a public furor. Fortunately, no extermination is necessary. The drainage pattern has changed and because of it, these sources are no longer settling into the ground to be filtered out before they slowly make their way toward coastal waters. Instead they are concentrated and flushed out through canals within hours, transporting all in their path.

Bigger Is Not Always Better

At North River Farms, N.C. State designed an intensive test of three different restoration techniques varying in complexity and cost (from least to most): simply plugging the ditches, filling the ditches or removing the crest and contouring the field. Based on their analysis from 2003-2008, they determined that, among other things, that there were no statistically significant differences between the simplest and the most complex. This has large implications in the practice of wetlands restoration, and allows us to maximize our ongoing efforts.

The groups and people who have partnered with the federation on the North River Farms restoration are:

Christine Miller joined the Federation in 2006 and is an assistant director. In addition to being one of our staff writers, she also works on strategic planning, project design and federal agency relationships. She holds a master's degree in coastal management and marine policy from the University of Delaware and has worked on coastal issues since 1996. She spends as much time as possible in, on and under the water.