The merging of 2020’s climate, economic and health calamities has exposed North Carolina’s vulnerabilities to rising seas and rural poverty.

But the multiple crises also clarified that the state’s recovery and its future lie in its proven strengths: clean energy and natural resources.

“I think in North Carolina, there’s a lot of opportunity for clean energy to be an economic driver for the state,” Locke Raper of GridBridge, a Raleigh-based company focused on enhancing reliability, resilience and stability of the electrical grid, said during the virtual North Carolina Clean Economy Summit on Aug. 20.

The event was a kickoff of sorts for the new Southeast chapter of E2, a national, nonpartisan group of pro-environmental business leaders from every sector of the economy.

With its focus on building back “a better, cleaner, more equitable and more resilient economy,” breakout sessions during the summit featured Energy Planning for NC’s Clean Energy Future, Electrifying Transportation, and Building a Resilient NC and Growing our Outdoor Industry.

Founded in 2000, E2 — short for Environmental Entrepreneurs — has 8,000 members in nine regional chapters, centered on the credo that smart climate policy is smart economic policy. 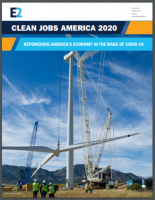 The state ranks No. 2 in the country for installed solar energy, and is exploring increased investment in wind.

At the end of 2019, the clean energy workforce numbered about 130,000, 11 times larger than those employed in fossil fuels, and more than the numbers who work as teachers, farmers or bankers, the report says.

North Carolina ranked among the top 10 states in the country across a variety of clean energy workforce categories and had the ninth largest total number of clean energy jobs among all 50 states.

Although about 19% of clean jobs had been lost due to the COVID-19 pandemic, the report shows that they have been returning at a steady rate, going from a low of 85,500 workers in May to 91,340 employed at the end of June, and even more in July.

Ethan Blumenthal, a 2018 graduate of University of North Carolina School of Law and a post-graduate scholar at the law school’s Center for Climate, Energy, Environment and Economics, said that the renewable energy industries lifted North Carolina out of the Great Recession that began in 2007.

“Not only do we need it from a climate change standpoint, and just from a social standpoint, but we could use it from an economic standpoint, as well,” he told Coastal Review Online, referring to clean industries. “And so that’s why I absolutely see the renewable energy industry in North Carolina, and the country, only blowing up from here. I really think the sky’s the limit.”

“And part of that I recognized after talking with advisers and friends,” he said in an interview, “is what I believe to be a niche for a nonprofit solar development company geared towards developing solar for other nonprofits and low and moderate income communities.”

Along with cofounder and law school friend Miles Wobbleton, Blumenthal launched his nonprofit company, Good Solar, in Charlotte in September 2018 with the idea to be the intermediary between the financing industry, the solar development industry and nonprofits, and connecting all of them.

“Part of the challenge, but part of the reason why we thought we could be successful and have a leg up as attorneys is just how complicated the regulatory world is for solar,” he said.

“And personally, I think we’ve done far too little in this country to support small businesses,” Blumenthal added, “and a lot of the solar industry are small businesses that are built in communities.”

Meanwhile, he’s one of six directors in E2’s Southeast chapter, which is focused on work in Virginia, North Carolina, South Carolina, Louisiana and Georgia.

“I’m a significant amount younger than most of the other directors,” Blumenthal, 28, said. “A lot of them have a lot of experience in their space and everyone I’ve talked to knows their stuff. I think there’s a breadth of experience.”

Blumenthal said the diverse range of interests and expertise of participants in the Clean Economy Summit shows how E2 can leverage its strength in a broad range of issues.

“Yeah, it’s very different than most nonprofits,” he said. “As a young entrepreneur, I saw a great value in joining what is effectively a network of like minds, whether to get them onboard with Good Solar and what sort of resources I might be able to get from that perspective, or just the sort of experience of learning from them and people that have been there and done that, and been in this space for a long time.”

Another chapter director, Dave Petri, owner and principal consultant with Cynosura Consulting in Mount Airy, has been involved with the outdoor recreation industry for a decade.

With the outdoor industry contributing $20 billion to the state’s economy, he said, there is a lot of new attention on the intersection of “clean tech” and outdoor recreation and their mutual interests.

“I see a huge opportunity helping E2 collaborate with outdoor industries to grow a clean economy,” Petri said in a recent interview. “We both have a common goal to battle the risks of climate change.”

North Carolina is fifth in the nation in outdoor recreational spending, he said.  At the same time, the state is also vulnerable to environmental damage and hazards caused by climate change.

Petri explained that an economy driven by renewable energy and a secure power grid will be more resilient to threats such as extreme flooding, intense storms and heat spikes.

“What we would like to see is less use of extractive energies,” he said, referring to oil and gas and mining industries.

In turn, public lands would be preserved into the future, benefitting its animal and plant inhabitants and opportunities for outdoor recreation.

“Protecting the environment is obviously a goal of the industry and E2 as well,” he said. “We are blessed with such outdoor opportunities. We can be on the beach one day and on the mountains the next day.”

According to the most recent report on the Outdoor Industry Association website, North Carolina’s outdoor recreational industry employed 260,000 people, paying a total of $8.3 billion in wages and salaries.

It also generated $28 billion in consumer spending — more than for financial services and insurance combined — and $1.3 billion in state and local tax revenue.

When Congress passed the Great American Outdoors Act this summer, billions of dollars suddenly became available for land conservation and projects in federal parks and refuges, making it possible for the first time in many years to improve and expand outdoor recreational assets.

Devising nature-based solutions to sea level rise, erosion and flooding, Petri said, needs to be a priority to protect outdoor spaces and build resiliency, including in often overlooked areas with less wealth that never recovered from lost industries and closed businesses.

“Some of these underserved communities don’t have the resources to go after these funds,” he said. “Outdoor recreation can help build an economic engine in some of these communities.”

With its focus on a sustainable economy and smart climate policy, E2’s Southeast network can be supportive in growing of outdoor recreational places, he said.

“I think the biggest thing I would like to accomplish is to raise awareness of what we have in North Carolina,” Petri said, “and how it relates to a thriving economy.”

Access for the pubic to North Carolina’s bounty of outdoor recreational offerings is nearly as important as knowing the sites are there, and what’s available when they get there.

“They go hand-in-hand,” he said. “That’s our infrastructure. That’s where our customers go play.”

Perhaps it’s because he’s too young for cynicism, Blumenthal confessed to be “crazy optimistic” about the clean economy’s future and a fair sharing of it, no matter what’s going on with politics.

“I think inevitably, it’s going to be thrown open, just the economics of it,” he said. “You can feel the momentum going towards this sort of socially just (investment) …

“There’s a way to do it that still benefits everyone,” he said, ”not just the few who have the economic capital to do it up front.”

And E2, he added, will have a role working with legislators in creating updated policies that promote a clean economy, which he said should include economic incentives.

“It’s just a little finger on the scales,” Blumenthal said. “And you can see huge economic results in jobs created. That’s the lesson that we need to keep in mind and we need to take forward as we now try to emerge from yet another recession.”