A coalition of 17 environmental groups, including four from North Carolina, is seeking a preliminary injunction to stop the implementation of changes to federal rules sought by the Trump administration they charge will gut environmental review. 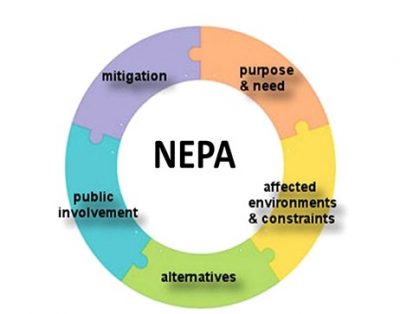 Attorneys for Clean Air Carolina, MountainTrue, the Haw River Assembly and the North Carolina Wildlife Federation, along with groups from Virginia, South Carolina and Alabama, filed a motion Tuesday in U.S. District Court for the Western District of Virginia in Charlottesville asking for a preliminary injunction to stop a major rule rewrite for the National Environmental Policy Act, or NEPA.

The coalition says the NEPA overhaul was rammed through without proper review under the Administrative Procedure Act and if allowed to take effect would erase major wetlands protections, ignore environmental justice concerns and eliminate consideration of cumulative impacts, including climate change.

Kym Hunter, senior attorney with the Southern Environmental Law Center and a lead counsel in the case, said the rule is being rushed into place and is written in a way that could affect both new projects and those that are already under review under the old rule.

“The rule will go into effect on September 14, 2020 and in addition to applying to new projects can apply to projects already in process,” Hunter said Wednesday in an email response to Coastal Review. “In many cases the changes will mean that a project is no longer subject to NEPA so we won’t even know what is happening.”

The motion cites several projects in North Carolina that are either under NEPA review or are soon to likely to be, including a port expansion and railroad realignment in Wilmington, the Mid-Currituck Bridge, N.C. 12 work, Chatham Parkway in a sensitive area of Chatham County and the Catawba Crossing Project in Gaston County.

A draft of the new NEPA rule, which includes 66 pages of changes, was proposed Jan. 10 by the White House Council on Environmental Quality. In the 60-day comment period that followed, it drew more than 1 million comments. On July 15, four months after the close of the comment period, the council issued a new rule that very closely the mirrored the original.

Administration officials, including the president, have pushed for the changes.

In a Jan. 10 announcement in the Roosevelt Room at the White House, Trump cited the Marc Basnight Bridge as an example of projects that took too long to build.

“The proposed rule would provide for a faster process while ensuring that agencies analyze and consider the environmental impacts of proposed actions and reasonable alternatives to address significant impacts,” she said. “Nothing in the proposal would eliminate the protections that Congress has enacted to safeguard our environment and the American people.”

The conservation groups challenging the rule say it will do exactly that and more, asserting that what is being billed as streamlining and “cutting red tape” in reality excuses agencies from considering long-term effects and cumulative effects, including those around climate change.

According to a brief in support of the injunction also filed Tuesday, “The elimination of the requirement to study indirect and cumulative effects will also lead to a host of other impacts being ignored, such as how multiple individually small impacts to wildlife habitat may force a species closer to the brink of extinction, how the cumulative combination of air pollution sources can exacerbate health problems in already-burdened low income communities, and how the indirect impacts of new development that results from the access created by a new highway may lead to air and water pollution, wetland degradation, increased traffic congestion, and more flooding.”

The challenge also warns that the new rule will lead to less public transparency and public input since the public relies on the NEPA process for information and updates on projects.

Wilmington announced this week that the NEPA process had formally begun for a proposed route for a new freight line and crossing over the Cape Fear River near the state port. The plan is designed to eliminate the rail loop route through the city and improve rail service at the port.

Aubrey Parsley, director of the rail realignment project, said the Federal Railroad Administration, the lead agency for the project review, had yet to issue guidance on the new rule. Parsley said he did not expect it to change community outreach and review.

“The proposed rule changes have not affected our community outreach efforts yet. Public outreach has been a cornerstone of this project since the very beginning and it will continue to be. That said, we’re still learning about the proposed rule changes and are awaiting some further guidance from our lead agency, the FRA,” Parsley said, adding screening criteria for the project is still being developed.

Hunter said there will broad consequences of rushing the rule through.

“The rules apply to over one hundred federal agencies and implementation is going to be utter chaos,” she said. “Because we believe the rules will ultimately be declared illegal we think it is important the rules be enjoined before they start.”

Among the consequences is that the rule ultimately will lead to more delays and legal challenges.

“The Rule dislodges forty years of stable, established legal precedent,” according to the brief.