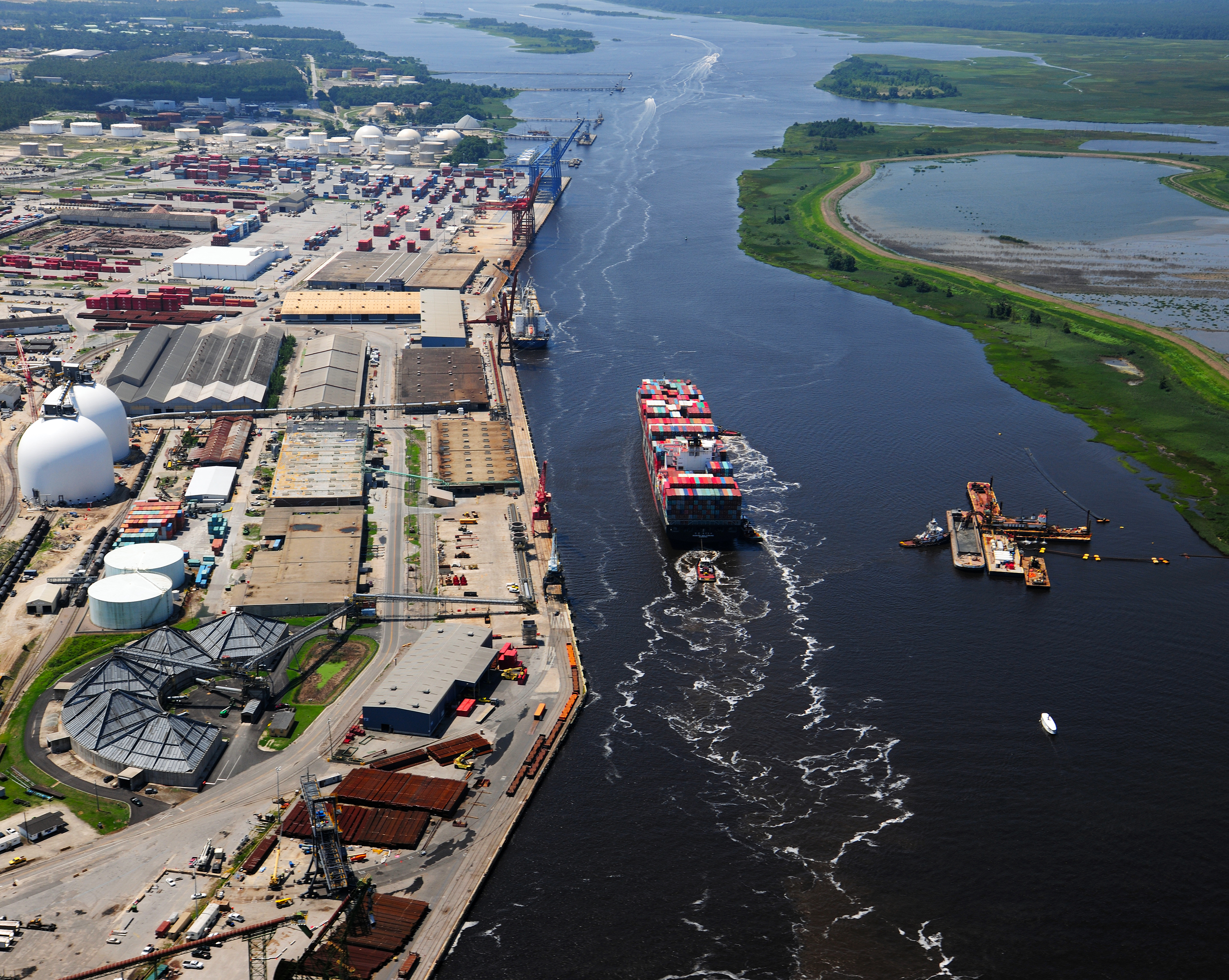 WILMINGTON – A presidential executive order directing federal agencies to expedite environmental reviews of infrastructure projects has some locals questioning whether the Wilmington Harbor Navigation Improvement Project could be on the fast-track list.

President Trump’s June 4 order calls for agencies to invoke emergency powers to speed up the environmental review and permitting of infrastructure projects.

Trump cited the need to help the national economy recover from the current health crisis, saying, “Unnecessary regulatory delays will deny our citizens opportunities for jobs and economic security, killing millions of Americans out of work and hindering our economic recovery from the national emergency.”

Critics of the order clapped back, arguing the executive order ignores environmental laws, including those under the National Environmental Policy Act, or NEPA, and strips the public of having a voice in the process.

Related: New Port Project Review Process
“That’s one of the major concerns with an expediting proposal like this is the elimination or public scrutiny of input,” said Ramona McGee, an attorney with the Southern Environmental Law Center in Chapel Hill. “If agencies try to rush through those environmental reviews they are going to silence a lot of those public voices.”

That’s troubling, she said, “especially for the port project which has a myriad of detrimental impacts. We won’t know the full scope of those impacts unless and until the federal government completes those necessary reviews. This project has enormous environmental consequences when you think about just the expanse of ecosystems and the expanse of associated impacts. It’s enormous and must be fully reviewed and vetted by the public.”

Dave Connolly, public affairs chief of the U.S. Army Corps of Engineers’ Wilmington district, said in an email last week that the Army secretary and all other federal government agency heads were directed to submit reports addressing the initial requirements of the executive order to the Office of Management and Budget no later than Friday, July 3.

“USACE is working through what the (executive order) means and what the implications are, and will provide that information to (the) Army to meet its reporting requirements,” he said. “We are unable to comment further on the EO at this time.”

About a year has passed since Assistant Secretary of the Army for Civil Works R.D. James kicked back the North Carolina Ports Authority’s feasibility study to the authority, saying it needed significant revisions before receiving his stamp of approval.

The proposed project includes deepening the main shipping channel through the Cape Fear River from 42 feet to 47 feet and the ocean entrance to the river from 44 feet to 47 feet. The plan also recommends widening the channel in multiple areas.

Ports officials say the new depths and widths would allow the Wilmington port to remain competitive with other East Coast ports by making room for larger container ships from Asia.

The project cannot move forward without James’ recommendation for approval by Congress.

The ports authority has submitted revisions of the study to the secretary’s office and is awaiting a decision, which essentially has put the NEPA process on hold.

Under the amended Section 203 of the Water Resources Development Act signed into law by President Trump in 2018, ports are allowed to jump-start projects by paying for their own feasibility and environmental studies rather than wait for federal funding.

But some, including attorneys for Bald Head Island, have argued that the public should have been involved at the onset of the ports authority’s Section 203 process.

Port officials said they reached out to local officials for input as well as hosted a public meeting about the proposed project.

Last fall, the Corps opened a 30-day comment period on the proposed harbor project. Those comments will be reviewed as part of the preparation for the draft environmental impact study, or DEIS.

Among those comments was a letter from the Brunswick County branch of the NAACP, which raised several concerns about the proposed project’s potential affects to the Gullah Geechee Cultural Heritage Corridor, environmental justice communities and the overall environment of the Cape Fear River and adjoining waterways.

The branch argued that the ports’ study largely ignores the corridor.

“I know how important the port is to the economy of Wilmington but when we sit down and take a look at the risks of uncertainties what are the tradeoffs?” said Brayton Willis, a member of the branch’s environmental justice and climate committee. “To me, there’s a lot of unanswered questions and if congress drives down a single solution, a single alternative with this Trump executive order to streamline NEPA I think we’ve done a great disservice to our country, our environment and our citizens. To just limit public participation to one alternative makes it even worse.”

Brunswick County branch NAACP President Carl Parker, whose great-great-grandmother was enslaved on Orton Plantation, spent his childhood along the banks of the Cape Fear River that would be impacted by this proposed project.

His family fished the river and grew crops on their land not far from the river bank before the federal government took the land through eminent domain to establish Military Ocean Terminal Sunny Point.

He recalled stories of how his father, who worked at the port once it opened, used winches to offloaded ships much smaller than the ones that sail to and from the port today.

“By them going and dredging out the river it has impacted a lot of people because now the fishermen don’t catch the fish they used to catch because the oxygen levels aren’t what they used to be,” Parker said. “I have a little bit more personal interest because of my raising up and haven’t forgot what it looked like before. It’s gotten to be so political and with the impact of the dredging and the larger ships going in for the ports to grow and be competitive with the other ports I’m just in a whirlwind of where this thing is going to take us.”

Whether or not Wilmington Harbor Navigation Project will be identified as a project that should be expedited under emergency powers depends on how the Corps interprets the executive order, McGee said.

Federal agencies have for some time had the authority to invoke emergency provisions to expedite permitting.

Cases in which those provisions have be executed have, for the most part, been aimed in response to crises relating to natural disasters or industrial accidents.

According to an article published by global law firm Pillsbury Winthrop Shaw Pittman LLP, agencies, including the U.S. Departments of Agriculture, Defense, Interior and the Corps, must submit lists of pending projects based on their potential to positively impact the national economy.

“Due to their central role in major infrastructure projects, certain federal departments have received more targeted directives,” the article states. “For example, the U.S. Army Corps of Engineers and Department of Transportation are specifically instructed to expedite ‘all authorized and appropriated’ projects within their jurisdictions.”

What that means for the proposed harbor navigation project is unclear.

“I don’t see why the Wilmington harbor enhancement deepening program wouldn’t be a part of this,” said Sen. Harper Peterson, D-New Hanover. “Obviously you have to balance economic development with environmental and cultural interests and equity. That’s the purpose of the NEPA program. In the long run it benefits everyone. What the haste for this is or why we’re trying to run around the NEPA process is perplexing. What really grates against all the interest groups is when you don’t include them and this seems to be an example of that.”

Rep. Deb Butler, D-New Hanover, said the Section 203 process has given people a feeling that the decision on the proposed project is preordained.

“As I understand this, these projects would still be subject to (the Water Resources Development Act), but the concern is that the way this is developing, it really is short-cutting public notice and public comments and it’s really gutting NEPA,” she said.

“That certainly would be a very terrible eventuality because this is an enormous project, the effects of which are far reaching and perhaps of which are unknown and so the more eyes on it the better. The port is an enormous economic engine and we want it to be successful and productive, but any project of this magnitude has to be thoroughly and thoughtfully vetted,” Butler continued. “I feel like the port is nimble, they are successful, they are very competitive relative to their larger counterparts on the East Coast. But, at the same time, we have enough environmental challenges.”