Updated 8:30 a.m. Monday: The League of Women Voters of Carteret County has canceled the March 19 reception and will reschedule the event later in the spring.

An exhibit recognizing the 100th anniversary of women getting the right to vote was under construction last week in the History Museum of Carteret County in downtown Morehead City. 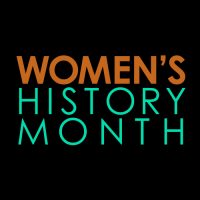 Museum Executive Director Steve Anderson was standing near the empty display case save a small sign that read “coming soon” March 6 when he told Coastal Review Online that the exhibit will feature a mannequin in authentic dress from the turn of the 20th century, a video featuring interviews with a handful of Carteret County’s influential women and descriptions of prominent women and historic events on a timeline showing how their work is relevant today.

“The whole idea of a museum is relevance to history,” he said, adding there will be more than just dates and names in the exhibit, “We’re going to give you reasons why you should appreciate what they did. Today, if you have issues, you should march to carry on the tradition of what they did, because you gain from it. And that’s what history is about long term, people relating to things that are going on.”

There’s a rush to finish the exhibit on women’s history.

Before storyteller Rodney Kemp began his program on prominent women of Carteret County during his Fridays with Rodney, a regular program on county history Kemp leads at the museum, Anderson told the roughly 50 in the museum’s auditorium that the exhibit would be ready by Thursday, when the League of Women Voters of Carteret County and the Carteret County Historical Society will host a Women’s History Month reception, “100 Years Strong.”

During the celebration of Women’s History 5:30-7:30 p.m. March 19, there will be exhibits, notable females throughout history represented by local women in period costume as a living history display, student projects, food donated by local female chefs and restaurant owners, and a silent auction.

Lucy Bond, a board member of the Carteret County League of Women Voters, was relocating the timeline from where it was assembled in another room to the exhibit hall Wednesday afternoon.

She said that League of Women Voters members have been planning the reception and other events to celebrate the 100th year of the vote since August of last year. The Carteret County Historical Society has been supportive of the effort since being approached by the league, she said.

Bond, a Morehead City resident and retired teacher, told Coastal Review Online in a followup email that the league appreciates the partnership with the Carteret County Historical Society to host this reception and for the staff of the Carteret County History Museum, “who have been creative in developing exhibits and supportive of our goal to highlight the struggles and accomplishments of women and girls in all walks of life and talents – past and present – who have contributed to our quest for equality in America.”

The League of Women Voters was founded in Chicago by the suffragists of the National American Woman Suffrage Association in 1920, six months before the 19th amendment was ratified and women won the vote, according to the website.

Kemp, a storyteller well known to area residents and visitors who studies and gives talks on Carteret County history, began his talk Friday by explaining that the League of Women Voters of Carteret County asked him about six months ago to consider the 100th anniversary of women’s suffrage as the topic for one of his Fridays with Rodney.

Kemp said that he put together a list of 100 names, “And if I do all 100, we’ll be here till 5 o’clock,” so he highlighted about 40, each with an anecdote or two, and how they impacted his life and others in the area.

He told the story of his grandmother reviving his older sister when she was born premature, and of Sissy Wallace, who worked in the drugstore in downtown Morehead City. “Well, how is she a strength in this community?” Kemp said that he could only go to the movies with his older brother or sister when he was young.

“And then, after the movie was over, my job was to walk to the drugstore in the middle of the 800 block, the old drugstore, if you will, that big paragon building, walk in the door and wave to Miss Sissy Wallace,” Kemp said Wallace would go to the telephone, and call his mother to come pick him up.

“And then she’d say stand outside and she’ll come get you in just a minute. Is that not small town USA?” he said. “See, number 1, I couldn’t reach the telephone. Two, I didn’t know my phone number anyway. Sissy had a burden on her when little Rodney walked in there.”

Kemp said that his father ran a shirt factory in Morehead City and the women that ran the floor were outstanding leaders and knew how to motivate the other women working to get their work done.

“Do you all know who Karen Amspacher is? That’s an amazing story. She had a dream as a young person, as a young teacher, that she thought that Down East deserved a museum … and she was so persistent and her dream was so strong, there is a Carteret County history museum at Harkers Island,” Kemp continued.

He included his mother, Virginia, who he said taught him the greatest sermon he’s ever heard in his life, he said.

“When I’m at First Methodist Church and I’m about 6 years old, Miss Maddie’s probably 95. I never knew her other than she was old, and I asked my mother, I said, ‘Mother, doesn’t Miss Maddie know she’s going to die?’ And mother’s answer, greatest sermon there’s ever been, ‘Is Rodney, Miss Maddie’s not afraid of dying.’ and I’m a 6-year-old, that mean’s she’s going to miss Little League Baseball,” to his shock and horror.

He went on to mention former women elected officials, historian and musician Barbara Garrity Blake, Carolyn Mason, who has been fundamental in the Wild Horses of Shackleford Banks foundation, Confederate spy Emeline Pigott, friends of his mother and teachers who influenced his life, and other prominent women.

Also during the presentation, the Morehead City Historic Preservation Society honored Carteret County’s Corinne Geer, Caroline Melke, Mary Sue Noe and Tibbie Roberts with the Order of the Live Oak, which recognizes the service and devotion of those who have contributed to the civic, cultural and societal well-being of Morehead City.

Bond said in a followup interview about Kemp’s talk that his “humorous and touching words were reminiscent of growing up in a small town, where the women in this community gave advice, direction, and love. They didn’t have much political power, but they had a great influence over the lives of children.”

Kemp also interviewed four African American women ages 70 to 96. He said during his program it was a great honor to make the video and speak with the women.

Bond said “His questions and their answers revolved around another Carteret County community of women who also grew up in neighborhoods, churches and schools that nurtured them and helped them grow up to be loving, caring women. This interview will be an exhibit at the History Museum along with the hat display based on the book, ‘Crowns: Portraits of Black Women in Church Hats.’”

“The local LWV has participated in activities such as marching in the Veteran’s Day parade as suffragettes, and attending the county commissioners meeting in November where a resolution honoring the 19th Amendment was approved by our local government officials,” Bond explained.

There have been Women’s History displays in different libraries each month, which will continue through August and the Beaufort Picture Show has presented several movies related to women’s empowerment, such as “Hidden Figures” and the “Maiden.” Others will be shown in the next few months.

“The intent of all of our activities throughout this year is to ensure no one forgets what it took to get what we all take for granted now and how familiar and relevant women’s struggles are still today,” Bond said.