Changes in the recycling marketplace, contamination and the dissemination of confusing or incorrect information have led to challenges with the viability of recycling, an often underused tool to combat marine debris.

Wendy Worley explained to those at the North Carolina Marine Debris Symposium held last month in Beaufort that by increasing the domestic markets for recyclable materials combined with providing the public with accurate information about recycling can help decrease marine debris.

Worley, section chief for the Recycling and Materials Management Section, a part of the state Department of Environmental Quality, added that people might not always make the link between reducing marine debris and increasing domestic markets for the recyclable materials.

The U.S. contributes to the problem of marine debris when materials sold in the global marketplace for recyclables go to a less-developed country with inadequate waste management systems that can’t keep the materials from escaping into the environment.

“One important thing that we can do is help build that marketplace here in the United States,” so that materials have less of a chance of ending up in the ocean, Worley said, adding her office spends a great deal of time working to develop markets for recycling materials in the state as well as with communities and businesses looking to evaluate their recycling program.

There have been changes in the recycling marketplace and what that means is that sorted materials collected for recycling in the U.S. were shipped internationally in the commodities market, which worked for a while. But generally, those markets closed and has caused the U.S. to reevaluate the way that material is being handled, she said.

One thing that really was apparent was how much contamination is in the recycling stream, Worley said, referring to when nonrecyclable items are introduced into the recycling mix. Communities are feeling the impact of the wrong materials being put in the recycling mix, because it leads to increasing costs and threatens the sustainability of the system.

Worley said during the presentation that local communities can help address that contamination with education, enforcement and a unified message. Through these steps, the recycling system can become more sustainable by reducing costs, strengthening local programs and supporting recycling markets, “all of which really help us have an efficient waste management system for our communities and state.”

Material packaging and terminology keep changing compared to when recycling first began, but recycling correctly is fairly easy, she said.

If the neck of a bottle is smaller than the body, then 90% of places in the U.S. will recycle the bottle. “Almost everywhere in the U.S., if the neck is smaller, then it is recyclable,” Rider said.

So are aluminum and steel cans, clean and dry cardboard and clean and dry paper. “Those are the things that are almost always going to be recyclable. But, if it’s smaller than a Post-it Note, it won’t make it through” the automated sorter. Examples include shredded paper and broken glass. Automated sorters won’t be able to detect the smaller pieces.

Rider pointed out that communication from the recycling industry about what and how to recycle has been unclear in the past, which Worley, with DEQ, acknowledged during the symposium.

Worley said her office recognized that local folks were struggling to reach the public. Her office was asked for unifying messaging around recycling: what to recycle, what not to recycle and how to get ahead of negative press.

To help local governments educate the public and provide a unified message, the Recycling and Materials Management Section staff created the 10-week Recycle Right NC campaign that was launched last fall. The campaign about recycling provided educational materials for local governments to use, including social media toolkits, and sample proclamations.

Worley told Coastal Review Online that the negative press on recycling included national and local media news articles with  headlines that exaggerated the challenges with recycling but by the end of the story the picture was not nearly as bleak.

“Most of the time, only part of the story was being told or they didn’t quite explain the complexity of the issues,” she said, “So it seemed that there was a lot of misinformation out about recycling, its benefits, and about the way materials are collected, sorted and sold to market. The Recycle Right NC campaign and our work as a whole is meant to provide data-driven, accurate, and NC-specific information about the issues.”

Her office put out as part of Recycle Right NC a flyer that served as a “quick training guide for those defending recycling to elected officials, other governing bodies and the media.”

The Defending Recycling document provides information in response to claims such as, “We don’t have to provide recycling for our citizens,” “We can’t charge residents more for this service,” or “No one cares about recycling; people don’t want to do it,” and how the public could perceive such claims.

For example, an elected official may say: “There’s no market for recyclables since China isn’t an option anymore,” which the public could interpret as: “Why were we shipping to China in the first place? That doesn’t sound sustainable or environmentally responsible!” or “Recycling in America is over.”

The document provides as a response, “The Facts/A Better Message: We do have markets for recycling in America. American markets traditionally require increased sorting for a higher quality material. That’s a good standard to support! We need to do two things: reduce contamination and develop more domestic markets. We can rebuild recycling the right way. We can enhance local markets that North Carolina has been developing for decades and send even less recycling overseas. When markets recover and commodity prices increase, we will keep more money in our state and waste fewer resources with transport.”

The Recycle Right NC campaign had more than 225 local governments sign up to participate, which exceeded expectations of having 50 to 75, Worley said during the symposium.

“It was way more successful than we thought it might be,” Worley said. During the campaign, staff posted to social media four times a week, leaving Friday as a catch-up day to answer questions. The campaign reached more than a million all over the state just in that 10-week period and generated more than 30,000 responses, likes and shares.

“Having a unified message on recycling across the state seemed like the best route to take following China’s ban on importing of recyclables. North Carolina has a strong recycling infrastructure, and this gave us the opportunity to make everyone aware of that. The response from residents was nothing shy of great,” said Bozeman.

Like many other local governments participating in the program, Bozeman said that the county posted each day on various social media pages that prompted conversation after conversation from residents.

“I received a large number of private messages, emails and phone calls, which I was glad to answer. The campaign reached residents that may not belong to a group or organization that would typically have presentations or workshops discussing things like recycling,” Bozeman said. “It reached people sitting in their living room who might not have otherwise seen the information. All in all, the campaign was a success and continues to be a resource for our residents.”

Worley told Coastal Review Online that while the 10-week campaign officially ran from Sept. 9 to Nov. 15, of last year, but as part of the office’s work to provide outreach on recycling issues, they are continuing the efforts through social media, presentations and training.

She also said during the symposium that proposals for Community Waste Reduction and Recycling Grants are due at 5 p.m. Feb. 20.

Find out what is recyclable in your community by searching for your locality on DEQ’s website.  Follow the Recycle Right NC campaign on Facebook at Recycle More NC. 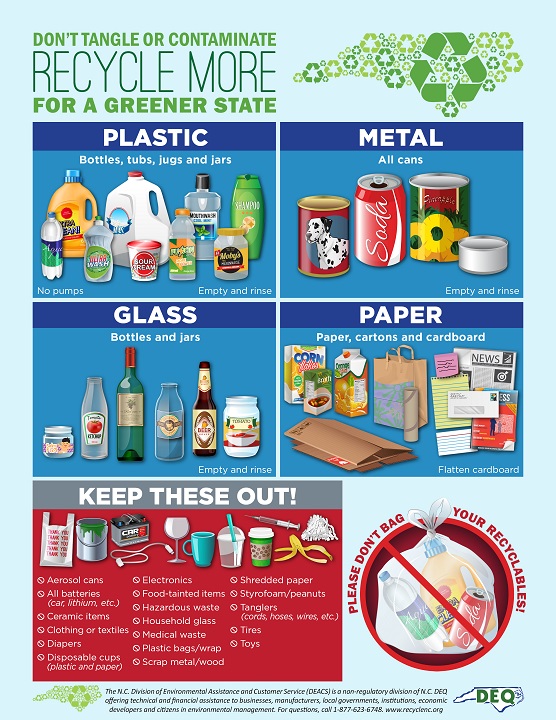