RALEIGH — A North Carolina research group is putting the final touches on a state climate report — described as the first of its kind — that details an array of major changes through the end of the century, including the dynamics of rising seas, wetter storms and more frequent flooding, according to a preview of the findings presented last week in Raleigh. 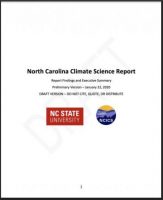 The Asheville-based North Carolina Institute for Climate Studies, a team of North Carolina State University experts who work closely with National Oceanic and Atmospheric Administration climate scientists and provide technical work for NOAA in its quadrennial National Climate Assessment, presented the preliminary findings during the state Climate Change Interagency Council’s meeting Jan. 22 in Raleigh. The council is to use the report as part of a state risk and resiliency plan due in March.

The report draws on the work of in-state experts as well as science used in the national assessment. The researchers developed sets of predictions for changes through 2100, including regional predictions for the state’s coast, Piedmont and mountain regions.

The report looks at the impacts from both a low range of greenhouse gasses that implies further efforts to lower emissions and a high range that represents current projections if left unchecked. Confidence in the predictions are then broken down into four categories: “low confidence” for predictions in which there is not enough information to determine the impact in North Carolina, along with “likely,” “very likely” and “virtually certain.”

NOAA scientist David Easterling, who works on national assessment, said during the presentation that the categories are more than words, they’re intended to convey the science behind the prediction.

“We actually have calibrated language in there,” Easterling said, “so that if we say something is ‘likely’ it actually has a probability attached to it of 66 to 90%, ‘very likely’ is 90% or greater and the ‘virtually certain’ designation starts at 99%.”

The overarching finding of the report is that “Large changes in North Carolina’s climate — much larger than any time in the state’s history — are very likely by the end of this century under both the lower and higher scenarios.”

The report comes as records are falling almost year by year. The state begins the new decade after its warmest 10-year period on record and after 2019 is now officially the warmest year recorded.

Major changes on the coast

While much of the state will feel the impact of those changes, the most dramatic changes ahead will be along the coastline, sounds and rivers.

Kenneth Kunkel, a senior scientist and lead scientist for assessments with the institute, said last week that continued sea level rise is among the predictions about which there is virtual certainty. Kunkel and Easterling are leading the report project.

Kunkel said the prediction is tied to global sea level rise, which is a virtual certainty.

The report sets the projected sea level rise by 2100 under the lower greenhouse levels a 1.7 to 3.9 feet at Duck and 1.2 to 3.3 feet at Wilmington, taking into account that subsidence is causing sea levels to rise about twice as fast in the northeastern part of the state.

Kunkel said the report authors turned to NOAA experts to study how that will drive an increase in high tide flooding and found a major jump in the frequency.

“Under the high-emission scenario, by 2080 we’re getting it every day of the year, virtually, and that’s because sea level rise has risen to where it is always above that current high tide flooding threshold,” Kunkel said.

Researchers are also certain that North Carolina is among the areas threatened by the prospect of stronger, wetter tropical storms and hurricanes, but Kunkel said that just how that will play out is harder to say.

While warmer oceans mean more water vapor to fuel storms, there are also other factors that dictate what that means for North Carolina.

“There’s high confidence in this for global changes, but if you drill down to any specific region there could be other things that change that,” he said. “We have different levels of confidence for different aspects.”

One aspect that is highly likely to increase, according to the findings, is the amount of precipitation and freshwater flooding from tropical systems that pass over or near the state.

The report’s team of authors and advisers are working through about 500 comments gathered last fall and winter during a peer-review process and are expected to finish the report in late February.

Tancred Miller, coastal and ocean policy manager with the state Department of Environmental Quality’s Division of Coastal Management, said the new report is much in line with previous assessments on sea level rise by the state Coastal Resources Commission’s Science Panel. What jumps out about the new report is the high tide flooding, he said in an email response to Coastal Review Online.

“From what I’ve seen, the preliminary sea level rise findings appear to be consistent with the CRC Science Panel’s 2010 and 2015 reports,” he said. “The new message that has not been covered in-depth in the Science Panel’s reports is the high tide flooding forecast — a nearly daily occurrence by 2100.”

Other predictions for increases in storm frequency, intensity and rainfall contain “the bad news that none of us wants to hear,” said Miller.

Miller said the report will assist agencies as part of the Executive Order 80 mission to lessen the effects of climate change and develop policies that take climate change into consideration.

“The report is meant to be used as a basis to help cabinet agencies evaluate the potential impacts of climate change on our programs, assets and operations, so that we can take the necessary steps to mitigate those impacts,” he said.

In the current draft of the report, key findings for North Carolina include the following: