Over the last few years, several organizations have worked together to create the North Carolina Marine Debris Action Plan, the first of its kind for the state.

“The overall purpose of the action plan is to guide work over the next five years that will strategically reduce the amount of marine debris and its impacts in coastal North Carolina through tangible and measurable actions,” according to the plan.

Sara Hallas, coastal education coordinator with the federation, explained Jan. 16 to the more than two dozen attending the four-day North Carolina Marine Debris Symposium held in the Duke University Marine Lab library auditorium that the completed action plan has five goals, with the first focusing on getting the plan in motion.

The other goals of the plan are to prevent marine debris, remove debris, prevent and remove abandoned and derelict vessels, and conduct research and assessment going forward.

Hallas told Coastal Review Online that the next step for the plan is to work toward accomplishing the five major goals over the next few years with actions that show results. The advisory and implementation committee created to finalize the plan and will be tasked with seeing through the next steps.

The team collected information and began developing an action plan for the state, Hallas said.

“The symposium created a collaborative environment for stakeholders to work together to develop actions, “she said. “The plan is a nice new way to keep it organized. The plan also makes a nice point of reference to measure performance each year.”

Though the marine debris action plan complements the symposium’s goals, they’re separate, but there will always be time on the symposium agenda to showcase action plan performance, Rider explained.

During the next Marine Debris Symposium, time has been marked on the schedule for an update on the action plan. Those who attended this year’s symposium will receive in February a survey to provide feedback on the plan and the marine debris symposium as a whole.

Gillikin told the crowd in the marine lab’s library auditorium Jan. 16, “We don’t want this plan to go on a shelf and collect dust, we want it to be an action plan where we truly have momentum moving forward. We want to make sure that we are doing that also in parallel with the southeast regional plan, a lot of our strategies and actions are complementary to that plan.”

The leadership team for the North Carolina Marine Debris Action Plan distributed an online stakeholder survey in late summer 2017 to learn more about marine debris issues and collect information on programs or organizations that dealt the most with marine debris.

Gillikin said that the stakeholders were asked for two strategies or actions they could take or three issues that they think are most important at the end of the survey.

“And that was the very beginning of us starting to make a list of all of the strategies and actions that we would consider for the action plan,” she added.

Hallas said one takeaway from the surveys is that while there was a sizable number of groups that led volunteer cleanups, there needs to be a better way to collect data on what was collected. This lack of data, “is the underlying problem of understanding what’s out there and how big this problem really is for North Carolina.”

The results of the survey were shared at the 2017 marine debris symposium that fall. Gillikin said attendees were excited to see some of the results of the survey and to learn that work was being done on a marine debris plan. “The leadership team was feeling really positive coming out of that meeting because there’s so much energy and so much support moving forward with the action plan.”

Hallas said that they realized the leadership team and other stakeholders needed to meet more frequently and held additional workshops. A February 2018 workshop had the attendees split into groups to take on manageable and affordable projects that could begin immediately, such as the Debris Free NC social media campaign.

Coastal Education Coordinator Bonnie Mitchell joined in the Debris Free NC social media campaign effort in 2019 when she became part of the federation staff. She said that Debris Free NC provides education and highlights different debris cleanups along the coast and inland. Now that the action plan has been released, the social media campaign will highlight the plan and educate the public on actions being taken.

Gillikin said that groups holding cleanups or other efforts to address debris can tag Debris Free NC on social media to promote their event.

One group at the February 2018 workshop created public service announcements, another looked at how to address litter and marine debris in unincorporated areas, one group focused on Styrofoam and another group looked at data collection.

These projects launched during the workshop were included in the action plan because many are still taking place.

“The State of Marine Debris in North Carolina: An Assessment of Prevention and Removal Efforts,” released in November 2018, was put together by the leadership team and illustrates several types of problem debris including consumer waste, derelict fishing gear, abandoned and derelict vessels and that generated during storms.

Gillikin said the state is starting to pay a lot of attention to the issue of marine debris and to the process of developing a plan, particularly for abandoned and derelict vessels.

“It was a great tool to show that without an overall state coordinator for marine debris, the agencies working on marine debris issues didn’t have the capacity to solve the problems Florence created with displaced wood debris and vessels,” she said.

Though the North Carolina Marine Debris Symposium was canceled in 2018 because of Hurricane Florence, the marine debris action plan stakeholders met again in February 2019 for the state Marine Debris Action Plan Workshop.

Beaufort Mayor Rett Newton told the attendees last week that during the 2019 workshop, he realized that while the federation is leading the effort, it is not a Coastal Federation problem, rather, “the problem of marine debris belongs to all of us. So, especially now that the action plan has been published, it’s incumbent upon all of us to kind of pick this up and run with it.” 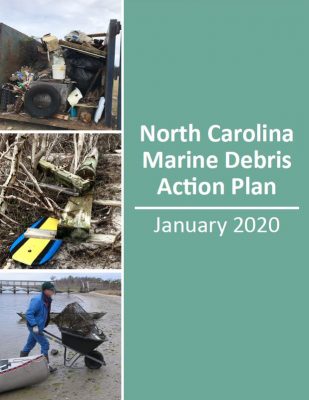 Hallas said as the leadership team got closer to having a final plan, they wanted to involve more organizations. Last summer, they formed the advisory and implementation committee to oversee the action plans.

“We brought everyone together to ask some of the questions the leadership team wasn’t able to answer on their own and an effort to take those final steps in the confirming of the action plan,” Hallas said.

Following the symposium, Hallas told Coastal Review Online that it was a feeling of accomplishment to share the completed Marine Debris Action Plan.

“Reflecting back on the process to show the collaboration that took place to produce the final document also showed this networking is essential going forward to implement the action plan,” she said. “It was inspiring to meet new professionals at the symposium that are interested in getting more involved in helping advance the plan.”

Hallas said that the feedback received during the symposium was positive and energetic.

“Several attendees approached the leadership team to learn about ways to get more involved, and they were pleased to know these much-needed efforts were taking place to develop a strategy to reduce marine debris and its impacts,” she said.

Looking ahead, the leadership team plans to continue building a network of collaborating agencies that will make the action plan more successful.

“While developing the Action Plan, we made a concentrated effort to outline items that were necessary yet achievable. The fact that others are coming to us and asking how they can help, implies that we did something right to create an Action Plan that will be a useable tool, rather than a document forgotten on the bookshelf,” said Hallas.

For more information on the North Carolina Marine Debris Action Plan contact Hallas at 252-473-1607 or sarajh@nccoast.org.