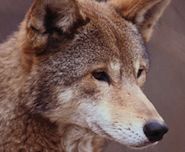 The Southern Environmental Law Center filed a public records request that was not fulfilled for data on the red wolf population and documents related to the government-run program to protect the animals, according to the report.

The Freedom of Information Act lawsuit claims that the U.S. Fish and Wildlife Service is breaking public records law by refusing to release information on the wolves.

In 1980, the species was declared extinct in the wild, though there were some wolves in captivity. Fish and Wildlife Service began a program in the late 1980s to reintroduce red wolves into the wild at the Alligator River National Wildlife Refuge in Eastern North Carolina. The number of red wolves peaked at 130 in 2006, but the population has shrunk to around a dozen in the wild, according to the News and Observer.

Join the conversation on our Facebook Page
Previous Post: « Lack of Public Input at Issue With Port Study
Next Post: New Hanover Gets $4M to Remove Debris »