RALEIGH – Collaborative efforts to grow the state’s oyster industry have contributed to a nearly twofold increase in value, according to a report from the North Carolina Commerce Department’s Rural Economic Development Division. 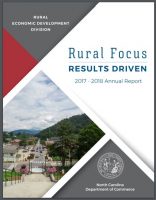 The division’s 2017-18 annual report notes that farm gate mariculture value, or the value of produced shellfish minus the selling costs, increased from $1.6 million to $2.4 million in 2017. The growth also supported an additional 56 jobs in the Pamlico Sound region through shellfish restoration projects.