HARKERS ISLAND — What better way to spend a February evening than enjoying a plateful of the rich hunting and fishing traditions of Down East Carteret County? Add the opportunity to learn about coastal customs and you have the recipe for the winter edition of the Taste of Core Sound.

The annual event is set for Friday at Core Sound Waterfowl Museum and Heritage Center on Harkers Island.

While Core Sound’s waterfowl heritage is always the theme, the focus this year will be on the history of the Core Sound Decoy Carvers Guild and how that organization and the Core Sound Decoy Festival held annually the first weekend of December set the course for the past 25 years. The program will also focus on the future of Core Sound decoy carving, which is today at the forefront of the Down East economy, and mixing old traditions with new collectors, carving competitions and events that together provide a year-round cottage industry for the region.

The evening program will feature the three surviving members of the “Original Seven” founding board members of the Carvers Guild: Wayne Davis, Carl Huff and James Salter. Each of them will share memories of those first years when a decoy festival and museum on Harkers Island were just a dream.

Wine and cheese will be served at 6 p.m., along with a chance to view the silent auction items. Food is served at 7 p.m., and the program will begin at 8 p.m. Tickets are $100 per couple for members or $125 per couple for non-members, and the price includes museum membership for a year.

Corey Lawrence – son of David Lawrence, who co-founded the Core Sound Decoy Carvers Guild, Core Sound Decoy Festival and Core Sound Waterfowl Museum – will serve as moderator for the program. Lawrence said that he’s looking forward to this year’s “winter taste” more than any before. 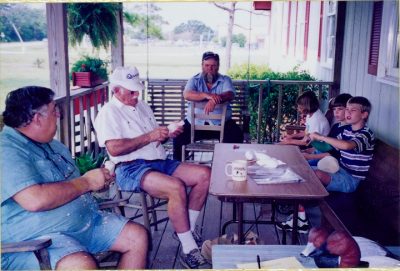 Gerald Davis explains that it’s “simple” to carve a duck decoy: “You start with a piece of wood and carve away everything that doesn’t look like a duck.”

“This is the only American folk art there is,” Davis said, his antique hatchet gently removing everything that doesn’t look like a duck from a block of Tupelo gum. “Everything else was brought here from somewhere else. Any place in the world where they make ducks, they got it from us. They found some duck decoys in a cave in Nevada, and they were 10,000 years old.”

Decoys were for hunting. What you did was spend the cold winter months sitting by the fire, carving decoys. You painted them to look something like a duck and then set them afloat on the sound and waited for real ducks to be fooled into thinking there must be food down there, or else, “Why are those ducks sitting there?” The real ducks came down and ended up as dinner.

“We never paid much attention to decoys,” Davis said. “We used to burn the old ones under the wash pot.”

“There’s a great group of decoys from well-known area carvers, and you’d have to look far and wide to find a better meal than we’ll have that night. What I think most people will enjoy the most, though, is the chance to hear stories from Wayne, James and Carl,” Lawrence said.

Lawrence said there’s no better way to kick off a 25th anniversary than by celebrating the reason for the Waterfowl Museum’s existence.

“I believe this night is long overdue and will mean a whole lot to many that attend,” Lawrence added. “So many love the Carvers Guild for what it is now, but know very little about how wonderful it was to be a part of that small group in the very beginning. This night will help many love it for what it was. For me, it’ll be a fun walk down memory lane.”

The program will also include a preview of the museum’s 25th anniversary exhibition, “Core Sound: Building a Place for the People.” The exhibit is still a work in process, with the goal to document 25 years of programs, events and community work that led to the creation of the Harkers Island destination and its mission of spreading the Core Sound story across the state and beyond. Past outreach programs include the Smithsonian Folklife Festival in Washington, D.C.

Pam Morris, exhibition curator, described it as, “ … just a glimpse of all the people and places that have been part of this museum’s history, but it will capture the spirit of community that has guided all that we have accomplished and all that we envision for the future.”

“The 25-year mark for the Core Sound Waterfowl Museum and Heritage Center is more than a timeline of events, dollars and buildings, numbers of people and miles traveled,” explained Karen Amspacher, museum director. “This anniversary is the recognition of a revival of heritage, traditions and community that have resulted in the wonderful facility we have at the end of the road on Harkers Island.”

Decoy carving, as with other everyday activities that become obsolete with a changing lifestyle, was long taken for granted as an art form.

The Core Sound Carvers Guild was established to encourage support and interest in migratory waterfowl preservation, and to share ideas and perpetuate carving, painting and taxidermy of waterfowl and related items.

What began as a group of seven carvers on Harkers Island is now an organization of 300 carvers, collectors,breeders, photographers and wildlife enthusiasts from across the country.