Environmental activist groups continue to use misinformation targeting geophysical surveys in an effort to halt oil and gas exploration and development. As each of their unfounded claims is disproven, they adopt yet another baseless assertion to mislead the public. Among the latest efforts is the claim that geophysical surveys are harmful to fish.

Marine seismic surveys have been conducted since the 1950s, and experience shows that fisheries and seismic activities can and do successfully coexist. There has been no observation of direct physical injury or death to free-ranging fish caused by seismic survey activity, and there is no conclusive evidence showing long-term or permanent displacement of fish. 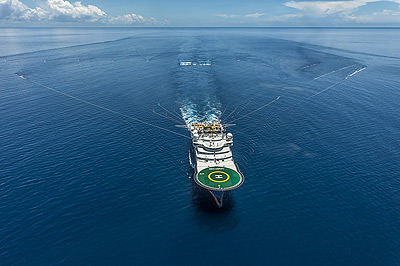 It is important to remember that seismic surveys are temporary and transient. The survey vessel is constantly in motion, and only emits signals that are local and short in duration. Similar seismic surveys conducted for academic research in Atlantic waters in the recent past did not produce any noticeable effects on commercial or recreational fish catches (based on a review of National Marine Fisheries Service data from the months surveys were conducted, noting “there was absolutely no evidence of harm to marine species” nor fish).

Contrary to environmental activists’ claims, seismic surveys also do not result in closing areas to commercial or recreational fishing. Survey crews work diligently to maintain a vessel exclusion zone around the survey vessel and its towed streamer arrays to avoid any interruption of fishing operations, including setting of fishing gear. As with all combined uses of offshore waters, there is coordination by all parties. At sea, coordination is regulated by the Coast Guard, requiring a Local Notice to Mariners specifying survey dates and locations. The federal Bureau of Ocean Energy Management has concluded “there is only a limited potential for space-use conflicts between seismic survey activities and commercial fishing operations within the area of interest” and any impacts “would be intermittent, temporary, and short term.”

The seismic and geophysical industry takes a great deal of care and consideration of all aspects of the marine environment. It demonstrates this care in many ways, including investing significant resources in research along with exploration and production companies to increase understanding of the effect of sound on marine life and to address any potential risk with effective mitigation strategies. We encourage the public to learn more about the science of sound in the marine environment.

Seismic and other geophysical surveys are the first critical step to better understanding the nation’s resource potential and there is not one single verifiable instance of sound from these surveys harming marine life populations. We cannot afford to put the nation’s energy security and independence at risk by limiting access to safe affordable domestic energy because of the baseless accusations of environmental activists. The economic and energy future of the United States is far too important to cater to the short-sighted agenda of a few.

Nikki Martin is the president of the International Association of Geophysical Contractors.

Join the conversation on our Facebook Page
Previous Post: « Critics Charge an Ill Wind Blows From Raleigh
Next Post: Not All Happy With Proposed N.C. 12 Bridge »