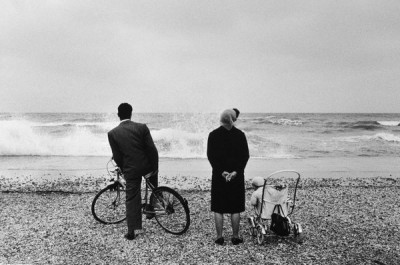 When I was in college, my father was stabbed three times in the back with a pair of eight-inch pruning shears by his brother. Both lungs were punctured. The shears missed his heart by a single millimeter. He was airlifted to a hospital in Virginia where he was brought back to life twice en route. The following day he slipped into a coma, for which the doctors had no explanation as to why. There he lay, neither dead nor really alive for two weeks. My daily routine consisted of alternating between his bedside and the hospital chapel.

My father made it, but the event took an extraordinary toll on my family and his psyche. It took months of physical therapy for him to fully recover. As soon as he was able to get around on his own he packed a duffel bag of clothes, climbed in his truck and drove to my family’s house on Carova Beach just below the Virginia line on the Currituck Banks. With no roads, no pavement, with the Currituck Sound on one side and the Atlantic Ocean on the other, my dad spent the next year wrestling with his own mind, trying to come to terms with what had happened and trying learn how to forgive his brother. Every evening, he would just sit in his truck on the beach, staring out at the ocean. His mind began to heal.

Years later, I found myself in the grips of my own psychological turmoil. Everything in my world was unraveling. To top it off, I had a degree in hand from Appalachian State University, but I was broke — stuck in the seasonal economy of the Outer Banks right as the global economy collapsed. What good was a degree in environmental history when the world was falling apart? Winter can be a long and dark time on the Banks in a recession.

As I began to discover my own personal brand of rock bottom, a certain obsession took hold of my mind. I needed the ocean. But I needed more than what simply driving out to Avalon Fishing Pier could offer. I lived on Colington Island in Dare County at the time, but it wasn’t enough. The storm was getting darker.

On a cold December day, beneath a steel-gray sky that was spitting snow, I found myself locked in four-wheel drive on the sand with a trailer full of my belongings, grinding my way up the beach to Carova. Somehow, I had managed to convince my parents to let me and my new bride move into the family cottage, for a price, of course, but just until we could get on our feet.

Life in Carova is quite unlike life anywhere else on the Outer Banks. This is beyond the pavement. Where the beach is the only way in and the only way out. Where each day is planned around the ebb and flow of tides, the phases of the moon and coastal storms. The ocean is the orchestrator of life. The alpha and omega. And like my father before me, I found that in short order, the storm within my mind began to calm.

Looking back, I am forced to wonder if any of this should really be a surprise? At what point and time have we not placed value on the sea for its healing properties? But to experience this first hand, to feel the unexplainable pull, to be able to look back and realize that the ocean saved my life, this sparked an unquenchable thirst for understanding what mysterious powers the ocean really holds over us as a culture or species.

Victorian age doctors routinely prescribed sea air as a remedy for all sorts of both physical and psychological maladies. Then again, doctors also used leeches. But as I began to entertain my curiosities and dive into the academic literature on the healing effects of the sea, it became apparent that far from hocus-pocus, there was very real science at work to back it all up.

Mathew White, an environmental psychologist, published in 2013 the results of a study on the effect of the ocean and health. In this peer-reviewed work in the journal “Health and Place,” White found that in the United Kingdom, there was a direct correspondence with health and proximity to the ocean. Census data indicated that the closer people lived to the sea, the healthier they were reported to be. The effects of this could be found up to 30 miles away from the sea. But, there was a statistical increase, when plotted out on a graph, the closer to the ocean one lived.

One of the reasons why we are able to see a direct benefit with proximity to the ocean comes from all the “stuff” floating around in the air near the sea. You know this stuff, its dimethyl sulfide. Ok. Well maybe you don’t know it by that name, but basically that is what you smell when you smell the sea. It’s a gas emitted by phytoplankton in the ocean. As you breathe it in, you are also inhaling negatively charged hydrogen ions pumped into the air from crashing waves.

Negative ions seem to be all the rage these days, but there is science that, too. For starters, negative ions help with oxygen absorption. Oxygen has a calming effect on the body. You, for instance, sleep better with more oxygen. Negative ions also both boost and balance serotonin levels – the happy hormone. The medical website WebMd claims, quite simply, that negative ions create positive vibes. There is more, but you get the point.

Negative ions are just the tip of the iceberg however. Today, the big questions being asked about the ocean and human health is its effects on our brain. Neurobiologists have even coined a term for this – Blue Mind.

Anyone who has ever spent time near the sea, and so probably everyone reading this, can attest to the calming effects of the ocean. In a nutshell, blue mind is a calm and meditative state of mind that is associated with our brains around water. This is opposed to “red mind,” which is characterized by anxiety, stress, fear and even despair – exactly the mental state that most modern Americans find themselves in on a daily basis.

Wallace J. Nichols, a marine biologist and Duke University alumni, has worked tirelessly to bring about an interdisciplinary approach to understanding this concept of blue mind. Each year, he organizes a conference of experts ranging from anthropologists to neurobiologists that he calls the Blue Mind Conference. In 2012, this conference was hosted on the Outer Banks. Nichols is also the author of the New York Times bestselling book “Blue Mind,” in which he brings together the cutting edge science happening on this topic to the masses.

This science, however, really is in its infancy. At the moment, we are limited to measuring responses right now. The “why” part of how our brains react when in the presence of the ocean is up for debate. But what we do know, thanks to gadgetry such as EEGs and MRIs, is that sitting beside the ocean produces the same stress reducing effects on our brains as meditation. What we do know is that the electrical activity of the brain is at its lowest state when looking at the water. Which seems to be exactly what millions of overworked, over-stressed, over-civilized people who spend their savings and flock to the ocean every year already understood. And exactly what my father seemed to have understood instinctively on a subconscious level after coming home from the hospital.

Wallace Nichols inspires us to engage in a deeper relationship with nature. Using our oceans as the prime example of how insignificant humans can feel while also being unmistakingly connected to the spirit of nature, Nichols urges us to embrace our natural surroundings in order to live robust and full lives.

Since reading Nichols’ book, I have had the opportunity to speak with my father about the ocean’s impact on his recovery after leaving the hospital. Like my own experience, the pull of the ocean was something that was completely unexplainable to him at the time. All he knew was where he needed to be. And once there, the ocean simply took care of the rest. It didn’t matter to him if it was day or night. He found himself called out to the beach in a routine he would repeat for nearly a year where he would just sit, breathe, listen, relax and heal.

Because my uncle did not actually kill my father, he was only given probation and community service for stabbing him. My father forgave his brother. But jealousy and mental illness have taken a toll on my uncle, who refuses to speak to my dad to this day.

Though separated by years and circumstances, I told my father of my own story of how I found myself desperately making my way to Carova. He sat and listened. He told me that he could never explain it, but he understood. They say there is no such thing as an ex-Marine. So when I saw the light in his eyes as we talked, his excitement over this shared experience and his real understanding of this sort of healing we had both found from the ocean, I knew I was witnessing something extraordinary in this Vietnam vet before me. I don’t think it’s too far of a stretch to say that the ocean saved both of our lives. And this will always be a bond that we share.

Jared Lloyd is a professional wildlife photographer and nature writer. Growing up on the Outer Banks, Jared has spent much of his life exploring the barrier islands, pine savannahs, black water swamps and sounds of North Carolina. These days his photography and writing carry him all over the world from Africa to the Amazon, the Galapagos to Yellowstone, but the lure of the salt life along the coast keeps bringing him back to North Carolina.