Venus (magnitude -4) will continue to be the bright morning star close to the eastern horizon during March. With a little luck, you’ll be able to see Mercury between Venus and the rising sun.  Look for both planets around 6 a.m.

If you’re up that early, you can also look for Saturn and Mars flanking the moon. Saturn will be on the left of the moon, and Mars is the reddish object on the right. Don’t confuse Mars with the red star Antares that is between the moon and the horizon.

Mars (+0.3) is brighter than Antares (+1.0), but they’re still easy to get confused.  Apparently, ancient astronomers had some problems confusing the two — Antares means “rival of Mars.”

Jupiter will rise about 6:30 p.m., starting yesterday.  At magnitude -2.5, it looks like a very bright star on the eastern horizon. If you view it with a pair of binoculars or a telescope, you should be able to see its bands. On a good night, you might spot several of its larger moons. 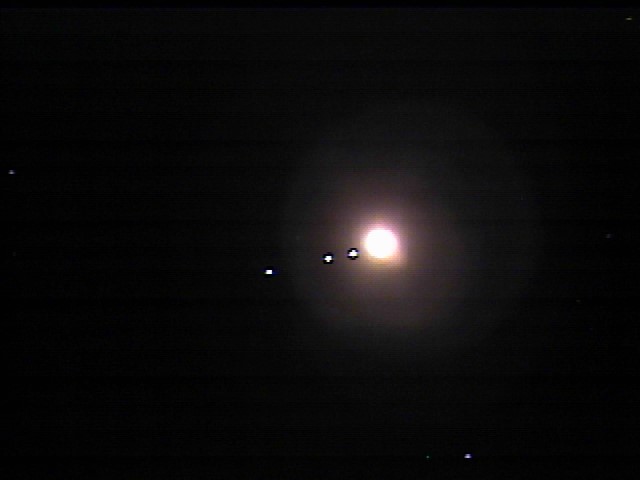 The large white disk, left, is an over-exposed Jupiter.  The smaller ones are four of Jupiter’s moons — Io, Europa, Ganymede, and Callisto (in the lower right corner). They are called the Galilean satellites to honor Galileo who first observed them in 1610.

March 9 will be the best night of the year to view or photograph Jupiter.  It will be at its closest point to the Earth and fully illuminated by the sun. Its famous red spot will be visible after 1:30 a.m.

Orion, the hunter, continues to be the most prominent constellation in the southern skies. M42, the Orion Nebula, surrounds the second star in the sword.  That’s not the only nebula in the Orion Constellation. The first star in his belt is surrounded by two other famous nebulae, the Flame Nebula and the Horse Head Nebula. Neither one is visible by the unaided eye. They are both difficult to view through a telescope, but I find it extremely rewarding to get a good glimpse of them.

If you have access to a good telescope on a computer guided mount, you might want to try and do a Messier Marathon on March 12.  There are 110 deep sky objects in the Messier catalog, and you might be able to see all of them that night.  To pull this trick off, you need to start as early as possible with objects nearest the western horizon. Then, progress through the list when M30 will rise in the east just after 6 a.m. 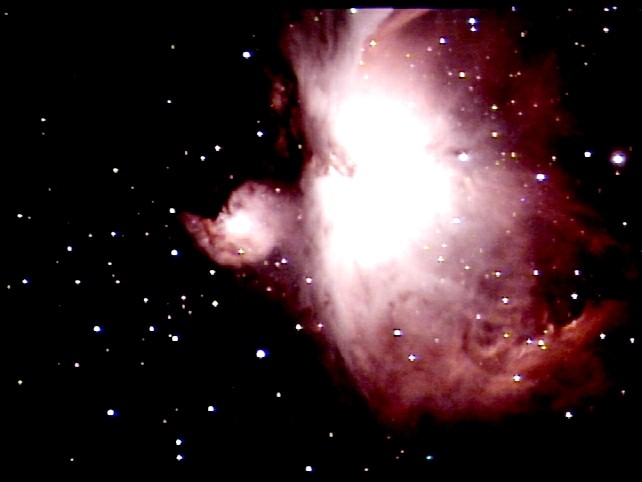 I started the month getting this great shot of the Orion Nebula (M42). Some people think I’m fixated on photographing M42, and I guess they’re right.  In my defense, M42 simply is one of the best deep space objects out there for viewing or photographing over and over. Located in the sword of the constellation Orion, it’s very easy to find. M42 is bright enough that you can see it without a telescope or binoculars. I’ve probably taken more than 100 shots of it, and I still know there’s room for improvement.  I love the delicate, wispy details that I can make out in this shot. Hopefully, the next image I take will show even more detail.

I spent a fair amount of time imaging Jupiter, and getting a great shot has turned out to be a real learning experience. The turbulence of the earth’s atmosphere is one of my biggest problems when imaging planets. Some nights, the image literally dances around on the screen.  To compensate for that, you shoot a long series of very short exposures and then process them using computer software.  This is one of the best shots I’ve gotten to date.

This is still a work in progress, so I hope to have some better images in the near future.

The magnitude of an object is a scale of how bright an object appears in the sky. At -26.75, the sun is the brightest object in the sky. The full moon has a magnitude of -13.  Intuitively, you might see something wrong with the scale. First, it seems to go backwards, since brighter objects have smaller negative magnitudes, and the sun is about 400,000 times as bright as the moon but only double its magnitude.

Those problems stem from the original system that tried to classify the apparent size of stars. The system was created by the ancient Greeks. It consisted of six classes of stars, based upon the apparent size of the stars. So the biggest and brightest stars were first class and the smallest, dimmest were sixth class. The sun and moon were not included in the system.

In 1856, Norman Pogson modernized the system to its current logarithmic scale that is based upon the brightness of the star. To compute the magnitude of any star, you need to compare its brightness against a baseline star. Vega is that baseline star, and its magnitude is defined as 0.  Using Vega as the baseline gave Sirius, the brightest star in the night sky, a magnitude -1.46.  When the sun and moon were included in this modern scale, they kind of fell off the chart and ended up in the negative range.

The human eye can see objects out to about magnitude 6.0 in very dark, clear skies. If you are viewing the stars from your backyard or porch anywhere along the coast, the odds are you are not experiencing “very dark skies.” The house lights, security lights and business lights are all forms of light pollution that reduce the splendor of the night skies, so you are probably limited to seeing magnitude 4.

Find a dark spot along the beach. Cape Lookout National Seashore is one good spot. On Hatteras Island, you can make a short trip to Ramp 27 or 30, between Salvo and Avon, and get away from much of the light pollution of the villages.  If you give your eyes about 15 to 20 minutes to adjust to the darkness, you will be amazed at how bright the night skies can be.

March 8 will be a new moon so it will be your best chance to go out and appreciate the stars.