Among the many benefits of living on the N.C. coast are the many opportunities for picturesque views of the natural environment. That’s why we at Coastal Review Online invited our readers to share their best images of North Carolina’s coastal character in our 2015 photo contest sponsored by Emerald Isle Realty and the N.C. Coastal Federation.

Art is highly subjective and beauty is often in the eye of the beholder, so judging the entries was a challenging task. Fortunately, our judges, Jason Voelpel, chief marketing officer at Emerald Isle Realty; Sam Bland, an avid nature photographer and coastal naturalist with the federation; Scott Taylor, photographic technology chair at Carteret Community College in Morehead City; and the staff at Coastal Review Online, were up to the task.

The judges didn’t agree on all their top choices but there was consensus on a few.

We received about 200 photos during the contest period. We selected weekly winners throughout the year and showcased the best images on our front page and our social media sites. The number of “likes” the finalists’ photos received on Facebook was also considered in the final judging, especially in regard to the honorable mentions. We were, unfortunately, unable to recognize all our favorite shots as winners.

Hungry by Brian Horsley. A top contender on all the judges’ lists and our overall favorite was Horsley’s dramatic, panoramic image of a humpback whale feeding on menhaden off the Cape Lookout National Seashore in November. The entry earned Horsley of Nags Head a $450 prize and a yearlong N.C. Coastal Federation membership.

“I have a 12-shot series of this humpback feeding,” Horsley said in his submission.

Technical information: The image was captured through a 200 mm lens with a Nikon D750 in shutter-priority, program mode at f8 at 1/4000 of a second and an ISO speed of 640.

The judges said the image was a once-in-a-lifetime shot.

“What a great capture of animal behavior,” Bland said. “A humpback whale lunge feeding, complete with mouth agape and fish flying through the air trying to escape. The sudden explosiveness of the whale and the splashing water is captured in excellent focus, which is not easy to do when you don’t know where the whale is coming up for that brief second or two. Add in a smiling dolphin and you have just captured the wonders of the ocean.”

Voelpel agreed. “It’s amazing that these events are not only taking place right off of our shores, but also being documented. It’s remarkable that Brian was able to capture the porpoise at the same moment the whale breached,” he said.

Taylor also praised the “decisive moment and great timing” of the snap, but quibbled slightly with the unusual cropping. “I do not feel the use of the extreme wide panoramic helped this composition though I can see why the photographer did it due to the bait fish,” he said.

The photo was made  “without getting in the way of the whale,” Horsley was careful to note.

Whales are protected under the federal Marine Mammal Protection Act of 1972. Specific humpback whale-approach restrictions have been in place since 2001 and require keeping a minimum distance of 100 yards. Penalties of $10,000 for each violation and criminal prosecution with a $100,000 fine and imprisonment can result from getting close enough to harass a whale. 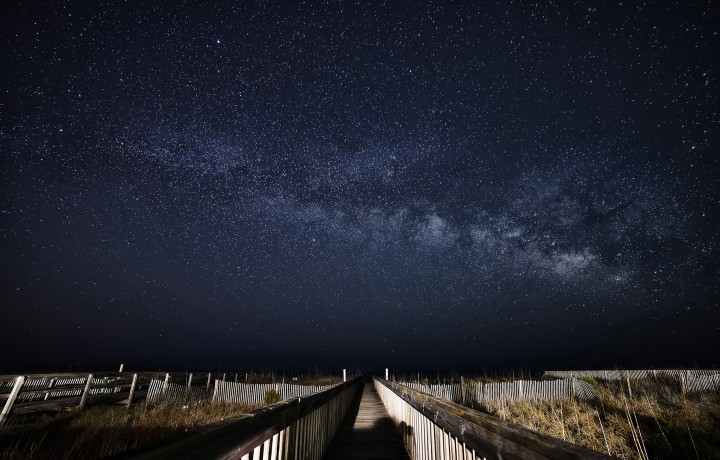 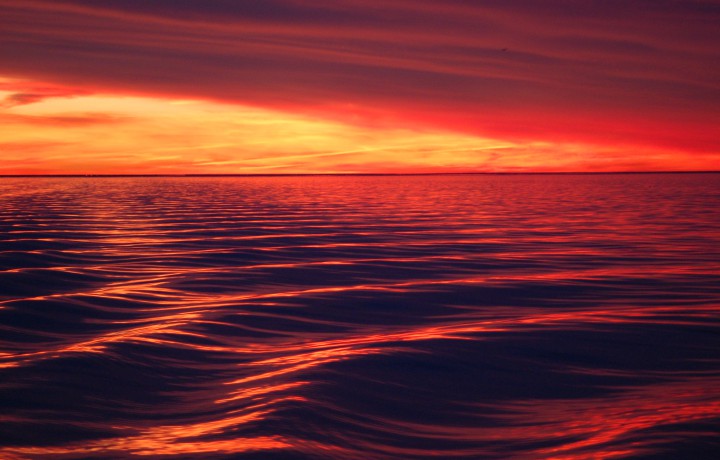 Third Place: “When the Sun Met the Sea” by Amy Lock. 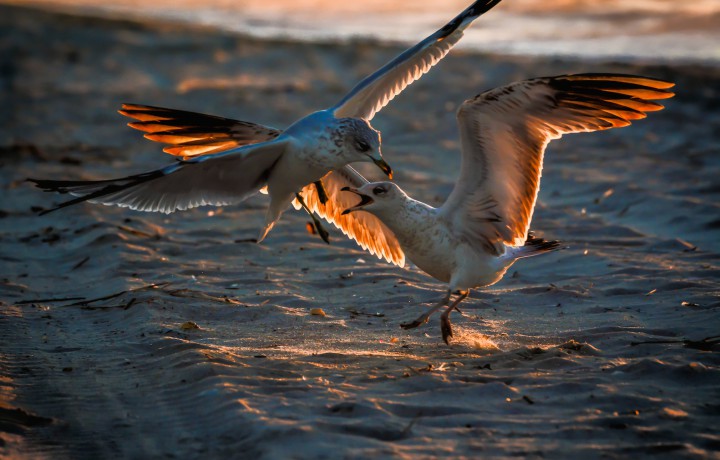 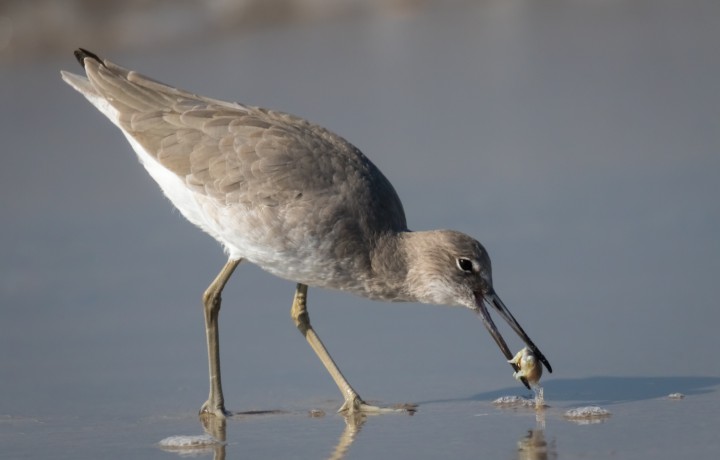 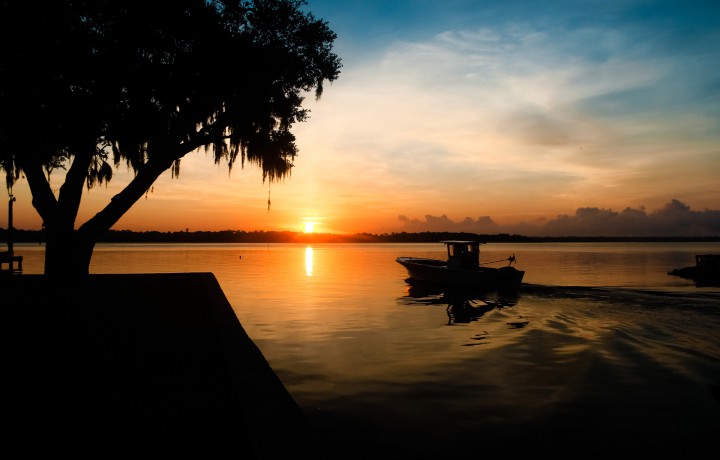 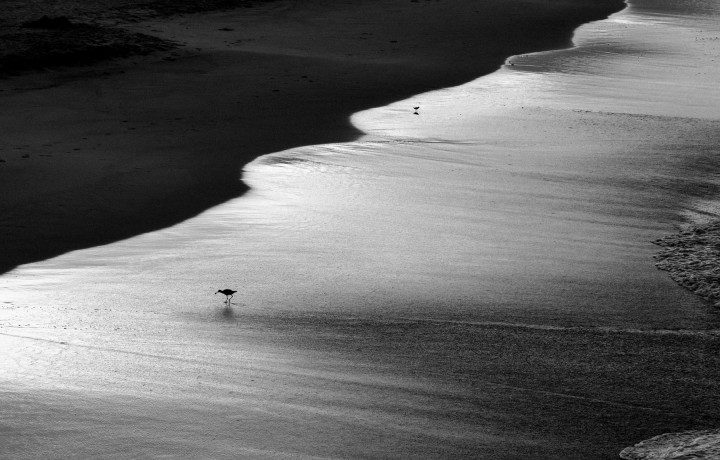 “Starry, Starry Night” by Pete Kreps. Kreps, of Raleigh, captured this image of the Milky Way in May 2014 from a boardwalk at Kure Beach. Kreps wins a $250 prize and a federation membership.

“Taken from my friend’s house, standing on his walkway to the beach (or stars),” Kreps said of his image. (It was a) beautiful clear night and the Milky Way was rising over the east that night.”

Technical information: The image was captured with a Nikon D610 in manual mode with a 30-second exposure and an ISO speed of 2000. F-stop and lens focal length were not provided.

“I like the way the boardwalk leads you right out into the open expansiveness of not only the sky but the ocean as well, as if you can walk out to the horizon and can climb the stars right up into the heavens,” Bland said. “Even though the ocean isn’t visible, it is implied with the low lumpy dunes, sea oat stalks and sand fence. The lower part of the photo has good depth of field creating the illusion that the boardwalk goes on forever.”

“When the Sun Met the Sea” by Amy Lock. Lock, of Emerald Isle, captured this image in December 2014 from the Cedar Island Ferry to Ocracoke Island. Lock wins a $100 prize and a federation membership.

The seascape appears somewhat otherworldly with its warm, ruddy tones, elements that judges found appealing. Voelpel described the shot as a “a striking image with such deep colors.”

Bland said he liked the “sense of movement created by the small swells and ripples on the water.” He also focused on the deep hues. “The color of the sky and its reflection staining the water has a great contrast of lighter and darker reds on both the sky and water. The lighter yellowish color just above the horizon on the left of the photo creates an opening that pulls my eyes to look in that direction. Framing the lighter yellow color and the line of waves on the left of the photo rather than in the center, I feel, creates that sense of movement,” Bland said.

We selected four honorable mentions with each photographer winning a $50 prize and a federation membership:

Taylor said the image captured “the decisive moment” with great light and fine detail. “For some reason it just didn’t beat out the others for me. Perhaps it was just a bit too contrasty and saturated for my taste. Judging is about taste to a certain extent,” he said.

“Breakfast” by Jody Merritt. Merritt, of Beaufort, captured this image in October 2015 in Atlantic Beach.

“I was at the Oceanana Pier and caught this willet feeding,” Merritt said in his submission.

“Sunrise Light” by Corey Cannon. Cannon, of Newport, captured this image in August just after sunrise at the DoubleTree Resort in Atlantic Beach. It was the only black-and-white image to make the final cut and one of few submitted during the contest period.

Technical information: Cannon used a Canon EOS 6D in aperture-priority mode with a lens focal length of 105 mm at f5.6, an exposure of 1/500 second and ISO 640.

Taylor praised Cannon’s composition, textures and use of light, calling it “a pleasing image.”

“Sunrise at Sneads Ferry Marina” by Frank Ostman. Ostman, of Hampstead, captured this fishing boat heading out at sunrise in June 2015.

“This is a great composition well executed,” Taylor said.