Mix the fragrance of pine and cedar with that of sweet ’taters, light rolls and cakes baking in the oven of a big ‘ole’ woodstove, topped with a big enamel coffee pot perking on top…you’ve got the “fragrance of Christmas.” —Madge Guthrie, “‘Christmas Was’…John’s Creek, 1930s, from “Remembering Christmas Past” (Seasonal Keepsakes from The Mailboat, 1991)

Christmas is five weeks away, but I can already smell the light rolls in the oven. Some folks along the N.C. coast call them “lightning rolls” or “light bread.” Others say “hot rolls” or “yeast rolls.” I like the name lightning rolls best. My mind plays the words in the melodious brogue of the High Tiders. For generations, they have lived along the state’s central and northern coasts, where this bread is ubiquitous at holiday time. In the chatter of long-ago Christmas morning kitchens, I hear their “i’s” pronounced “oi” as in “Hoi Toider.”

I’m neither a High Tider nor a native North Carolinian. I was born in New Jersey. Although I spent most of my life on North Carolina’s southeast coast, my parents were European. Lightening rolls have never been part of my holiday celebration.

My education about these buttery, golden brown yeast rolls baked with a dash of sugar comes from years of reporting about the state’s commercial fishing industry. The many High Tiders with whom I crossed paths readily shared their food traditions. I smell the rolls each year in the weeks before Christmas thanks to vivid memories written in a series of “Seasonal Keepsakes” booklets published by The Mailboat. It’s a journal documenting N.C. coastal life in the words of people who live or have roots along the shore.

Lightening rolls always fascinated me. In the South, a region better known for biscuits and cornbread, how did this yeast bread rise to such prominence, especially in North Carolina’s remote barrier island communities?

(Christmas) Dinner was served as soon as everyone got there and the rolls came out of the oven. Mammy waited last to put them in so they would be nice and hot. – Harriett Whitehurst Kirk, “Christmas at Mammy’s” in Bettie from “Core Sound Memories: The People and Places that Make Christmas Special” (Seasonal Keepsakes from The Mailboat, 1996)

The Romans were the first to make breads comparable to those we know today. They also enriched breads with milk, eggs, spices and sweeteners, producing expensive loaves for the wealthy.

Bakeries abounded in the Middle Ages. Most people couldn’t afford store-bought bread, so they baked at home. Dark or whole-wheat breads were common. Folks preferred white-flour breads for their lightness, flavor and appearance, but the expense of milling white flour made those loaves too costly for the average person.

“White bread was considered as much a luxury as fine handmade cake is today,” William G. Panschar wrote in Baking in America (Northwestern University Press, 1956).

Yeast came from the fermenting barm of wine and beer, not little packages at the supermarket.

Europeans brought their bread baking traditions to the New World. Within a few decades of Jamestown’s founding, commercial bakeries sprang up around city centers. Most settlers, however, lived in rural areas and baked at home. They relied on oven chambers built into fireplaces or Dutch ovens set directly on the coals. Some used “roasting kitchens,” raised boxes with openings placed close to the fire.

“The Colonial housewife was no less a baker then the craftsmen of the bake shops. Indeed, it was generally accepted that the homemade loaf was superior to anything that the baker could turn out,” Panschar wrote.

Well into the 1800s, homemakers apologized to guests to whom they served commercially baked bread.

White loaves were baked throughout the colonies. Southerners preferred biscuits, cornbread and breads hot from the oven. 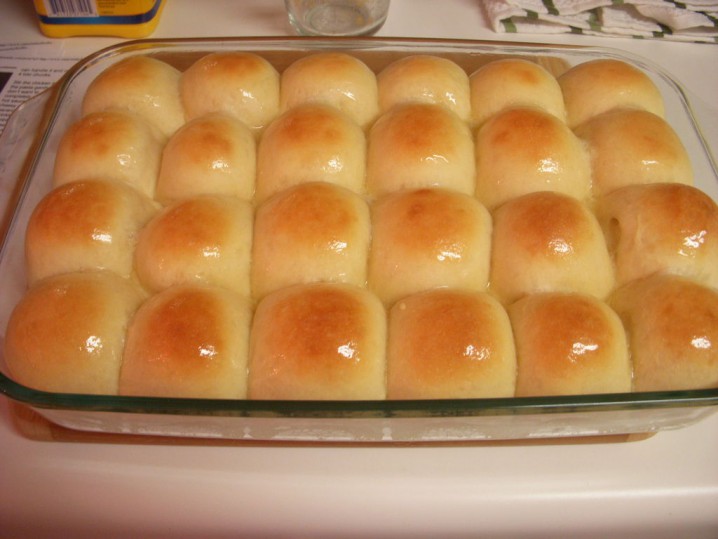 Everyone ate in Mammy’s kitchen, taking turns by the menfolks, to women, and the children. As we children would wait for the men to eat, Mammy would sneak some of her huge, crusted light rolls out from the kitchen to us hidden under her apron. They would have a big hunk of butter melting inside where she had cracked the rolls open – a feast for starving young ’uns. — Harriett Whitehurst Kirk, “Christmas at Mammy’s” in Bettie from “Core Sound Memories: The People and Places that Make Christmas Special” (Seasonal Keepsakes from The Mailboat, 1996)

Splits recipes call for butter, milk and sugar. Cornish splits served with golden syrup and clotted cream are said to come with “thunder and lightning.”

As agriculture flourished in America, wheat was grown and flour mills popped up along the coasts. Soft wheats grew best in Southern climates, as they did in Ireland and England. Those wheats produce low-protein flour that insures the tender crumb mandatory for perfect biscuits. Low-protein flour also makes softer yeast breads. By the early 1900s, Wilmington had at least three companies selling their own brands of specialty flour.

Lighting rolls likely took strong hold along the Carolina coast in the 1900s. Previously, bakers, whether professional or home cooks, had to prepare their yeast starters from scratch. Flours required more sifting to filter out foreign matter. Uncontrollable temperature and humidity could ruin the rise.

In the 1860s, The Fleischmann Co. introduced standardized cakes of compressed yeast to the American market. Dry yeast followed during World War II. It did not require refrigeration, had a long shelf-life and produced more consistent results. Improved milling technology reduced the price of white flour, and shelf-stable shortening replaced butter.

Even with all the advances, making lightning rolls required effort in yesteryear’s remote Outer Banks communities, where everything was delivered by boat and kitchens lacked modern conveniences into the 1900s. Biscuits and cornbread could be prepared in a relative flash. Lightning rolls mandated time. Old recipes call for double and triple rises, making the preparation an all-day affair. Extra ingredients – lard or shortening and sugar – were needed to make the rolls lusher than everyday bread.

Holiday time is when cooks go all out. Perhaps that’s why lightning rolls are so often mentioned in association with Christmas along the banks. The aroma of lightning rolls ready to be pulled from the oven and their steamy softness warming cold hands by the fire on Christmas Day remains a precious memory, even if, as in my case, it is imagined.

Christmas Day at Mammy’s was many delightful things, all of which to make a child happy. Looking back now, I realize it was ‘a time’ that was a gift. We were given the gift of belonging – knowing that we were a part of everything; of feeling cherished – knowing that others had done a lot of extra work to make us happy, and we knew that we were loved. — Harriett Whitehurst Kirk, “Christmas at Mammy’s” in Bettie from “Core Sound Memories: The People and Places that Make Christmas Special” (Seasonal Keepsakes from The Mailboat, 1996)

In a small mixing bowl, dissolve yeast cake in 3 tablespoons of warm water. In a large bowl, combine dry ingredients and add yeast mixture. Cut in lard or shortening. Using hand, work more warm water into the mixture until the dough forms a ball. Let dough rise in a warm place for 2 hours. Knead again until dough no longer sticks to hands. Pinch of small pieces of dough and use your hands to roll them into the shape of a biscuit. Place on an ungreased baking sheet in a warm spot. Cover with a light, soft cloth and let rise until double in size. Bake rolls in a 425- to 450-dgree oven until brown.