KURE BEACH — It is no secret that the southeastern coast of North Carolina is home to a complex and biologically diverse ecosystem – a mix of dense forest, grassy lowlands and essential river systems that enter sensitive estuaries. It is also known that this area is one of the fastest growing in the country and is threatened by constant development.

It wasn’t until recently, however, that a team of researchers from three environmental groups uncovered a well-hidden secret: The immense variety of wildlife living in and traveling along a green highway – a stretch of several thousand acres surrounding the Northeast Cape Fear River between New Hanover and Pender counties.

This secret is on display this summer in the Spadefish Gallery at the N.C. Aquarium at Fort Fisher. The Northeast Cape Fear River Wildlife Exhibit, a combination of print and digital displays, showcases an assortment of the 31 species captured by cameras over a two-year period. 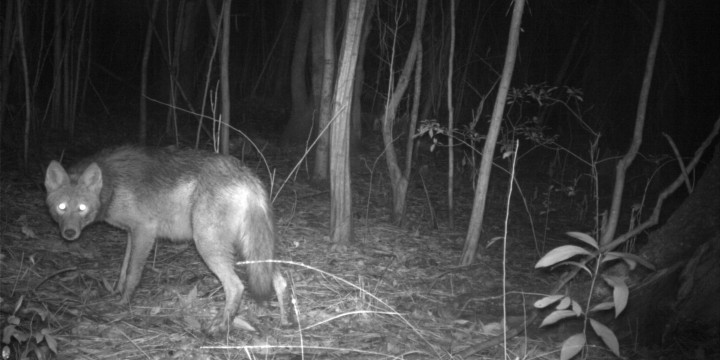 A lone coyote reacts to the flash in the early morning hours. 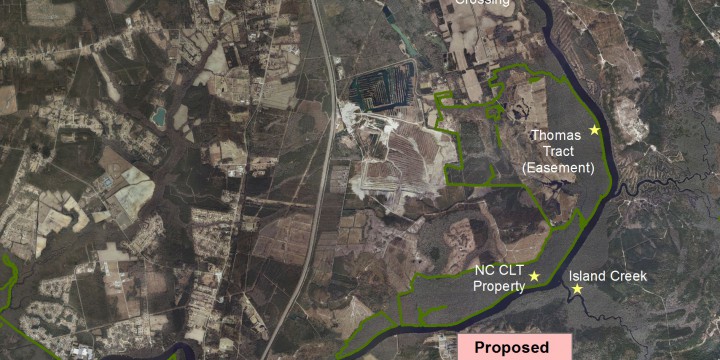 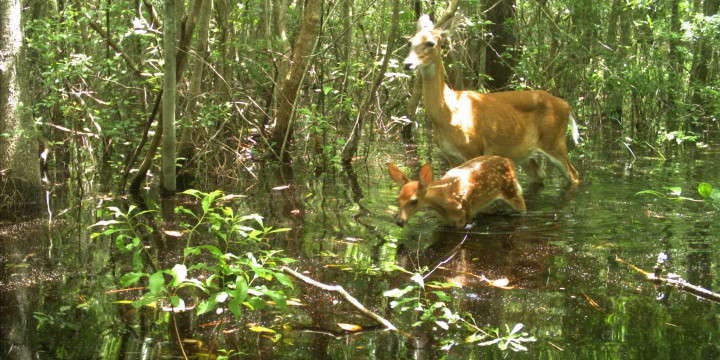 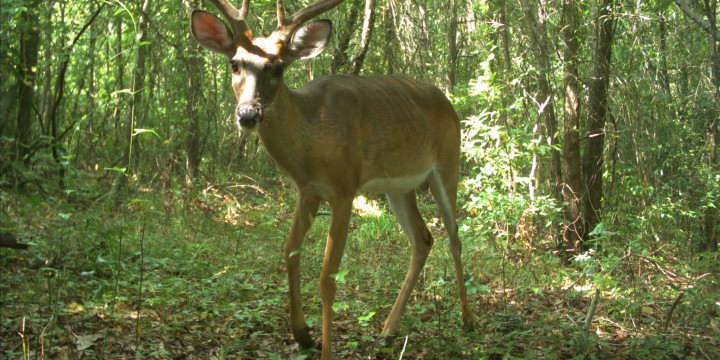 A large white-tail buck poses for the camera in one of the images captured as part of the Northeast Cape Fear River Wildlife Exhibit at the N.C. Aquarium at Fort Fisher. 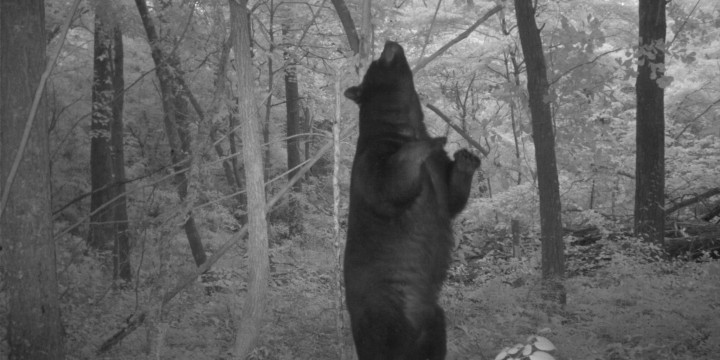 A large black bear scent marks a tree along the river 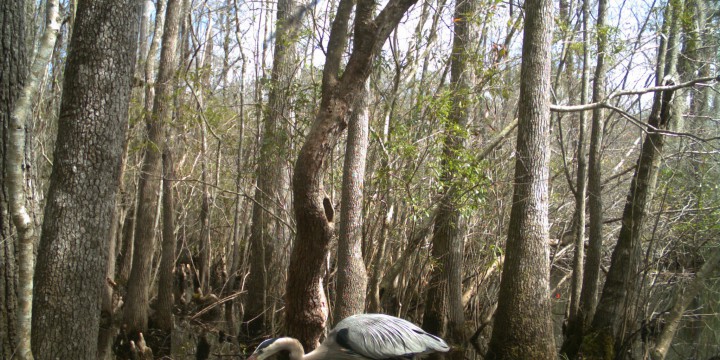 A great blue heron fishes for lunch in the flooded timber
More than 100 images were printed on two-foot square mounts and include wild turkey, deer, bear, raccoon, coyote, bobcat, fox, snakes and birds. Color prints were made from daytime shots and black-and-white prints from the night shots. There is a young bobcat prowling near a beaver dam, a unique hybrid wild turkey with brown and red feathers and a 500-pound bear scratching his back on a tree.

Ron Sutherland is a conservation scientist with the Wildlands Network in Durham and was involved with the photography project. “We wondered what would happen if we could document the wildlife in an extended area around Wilmington,” he said.

This extended area faces a triple threat: urban sprawl from Wilmington along Interstate 40, possible contaminants from a former chromium mine that is now an Environmental Protection Agency Superfund site and the proposed construction of a Titan America cement plant in Castle Hayne.

“The corridor is one of the most threatened natural areas on the East Coast. It is a critical wildlife link that people should know about,” Sutherland said.

He teamed with Kemp Burdette, riverkeeper with the Cape Fear River Watch, a nonprofit organization founded in 1993 to protect and improve the water quality of the Lower Cape Fear River Basin and Mike Giles, a coastal advocate with the N.C. Coastal Federation.

“The project was a great success,” Sutherland said. “I never imagined we would get so many images that are so clear. It is really amazing.”

The project began in January 2013, when the team surveyed the area searching for game trails and signs of wildlife. Next, they installed 24 Reconyx PC900 wildlife cameras along a 10-mile stretch of the river. Locations included private and state lands and property owned by the Coastal Land Trust.

The cameras took pictures every fifth of a second. Twelve of the cameras were placed on land reachable by vehicle or by foot, the other 12 were placed in areas only reachable by boat. All were mounted between two and three feet from the ground, at animal level.

The cameras were checked every three to four months and for safety reasons were always visited by a team of two or three people.

“One morning, an intern reached down to pull the boat closer and was inches away from a cottonmouth,” Giles, said during an interview in the gallery, as he pointed to a colorful print of an extremely large snake coiled and ready to pounce.

The weather-proof cameras were equipped with eight-gigabyte memory cards and rechargeable batteries that were exchanged on the visits. The cameras captured well over 50,000 clear and usable images of just what goes on in the forest when no one is looking

Giles said he was right at home during the project. The Charlotte native and N.C. State University alumnus grew up hunting and fishing and spending a lot of time outdoors.“This was really exciting,” he said. “We were really fortunate to have captured images of some amazing native species.”

Giles was excited not only with the captured images of the species, but also the glimpses into their behavior. His favorite? The black bear.

“We couldn’t believe how many images we had of some really large bears doing things we normally don’t see bears doing. Night and day, we saw how they all moved around the habitat,” Giles said.

The cameras also captured visitors of the human variety – hunters, kayakers, hikers and people riding horseback – captured by the cameras, which operate nearly silently and use an infrared flash as to have minimal impact.

“Most unusual were the pictures of the animals looking at the camera,” Sutherland said. “It makes you wonder, is it possible they were alerted by the vibrations?”

Everyone involved agreed the results of the project document how the area serves as an important wildlife corridor connecting the more than 17,000-acre Green Swamp Preserve in Brunswick County to the 75,000-acre Holly Shelter Game Lands in Pender County.

“This green and blue patch is vital not only for habitat, but for species interchange from Hyde County to South Carolina,” Giles said. “Now we have to take this show on the road and educate the public. We need to show this unique stretch of land that is under threat. At the very least, our legislators need to see these images. The proposed expansion of the Titan cement plant alone would impact over 3,000 acres of this area.”

N.C. Aquarium at Fort Fisher Director Peggy Sloan said she was pleased to partner with the N.C. Coastal Federation on the project.

”Each day, our guests make valuable connections to animals found along the waters of the Cape Fear River, from fresh water streams to the open ocean,” she said. “Hosting the exhibit offers an additional opportunity to learn about local wildlife and the importance of preserving natural areas right in our own backyard — our guests will see in these dynamic photographs so many different animals they may not expect.”

The exhibit is to be formally dedicated at the aquarium in July. After the three-month run, the team hopes the exhibit will travel to the other state aquariums at Pine Knoll Shores and Roanoke Island.

Meanwhile back in Durham, Sutherland is optimistic others will get to see the images.

“We’d love to have this exhibit come to the Triangle,” he said.

The exhibit will remain at the N.C. Aquarium at Fort Fisher, 900 Loggerhead Rd., Kure Beach, until September. For hours and admission prices, visit www.ncaquariums.com.

Denice Patterson is a preschool teacher and free-lance writer in Ocean Isle Beach. She has degrees from Penn State and N.C. State universities and has been writing about people and places in North Carolina for 25 years. She has been published in the "North" and "South Brunswick" magazines, "Carolina Gardener" and "Our State" magazine.