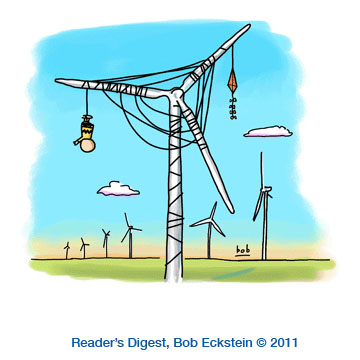 High cotton, I would say.

It’s a coup that I would like to take some credit for, but the fact is that Bob found us. An email from him appeared out of the blue in my inbox one day a few weeks ago. He wanted to know if we’d be interested in running his original cartoons. Bob attached a few as samples.

We were immediately interested, but I was sure we couldn’t afford Bob. Did I note that he is a New Yorker cartoonist? In the email exchange that ensued, Bob assured me that he wasn’t interested in making a lot of money from CRO. Buy a minimum of two cartoons a month, he said, and he’d let us have them for a fraction of his going rate. I’m talking a 90 percent discount.

The deal was too good; I was suspicious. I can’t help it. All those years in the news business will turn even the sweetest guy into a cuss, and I was never the sweetest guy. This was probably some sort of cartoon scam, I thought with a furrowed brow. I first asked Bob for a photo and bio, ostensibly for our Staff and Contributors Page.  He sent them along. He doesn’t know this, but I then spent the next few days checking Bob out on the Internet, comparing the photo and the facts he sent. I became convinced that Bob is who he says he is.

Sorry  about all that, Bob.

During that search I learned that this guy is more than a renowned illustrator and funny cartoonist who has been nominated a couple of times as Gag Cartoonist of the Year by the National Cartoonist Society. He is, for instance, a snowman expert. How does one become such a thing and, more importantly, why? Well, Bob thought Frosty was getting a bum rap. Consumer capitalism had turned the snowman into a pitchman for everything from shampoo to laxatives. Some feminist professors have even publicly denounced him as a fat white guy who lolls on the lawn “while the woman of the house is inside toiling.” In Switzerland, there is even a national holiday dedicated to blowing him up.

So Bob set out to right a wrong, traveling the world for seven years researching and attempting to answer the age-old question, who made the first snowman? The resulting book, The History of the Snowman, was published in 2007.

“The snowman might be different to everyone, but most importantly, he is nobody to everybody,” Bob writes. “We can all relate to him. He’s the last man picked on the team. He is Everyman.”

Born in the Bronx, Bob now lives next to The Cloisters in northern Manhattan, where he wrote his next book, The Sea Below Us, a graphic novel and 1850 diary of a sailor searching for the North Pole. To write the book he reconfigured his office into the inside of a ship’s quarters.

Bob’s currently writing another graphic book about the best bookstores in the world.

We’re happy to welcome Bob to the CRO family. Look for his cartoons, which will all have a coastal theme, at least twice a month at the bottom of the front page.

Offshore Drilling and the N.C. Coast

Also, beginning next month, look for what we think will be the most comprehensive series of stories about offshore drilling and the N.C. coast.

In the most ambitious reporting project we’ve ever attempted, seven reporters will write more than 40 stories that will stretch out over two months. The stories will be contained into weeklong packages with two-week breaks in between. The first package will run June 1 and the last start on July 27.

Stories will detail the history of oil drilling in North Carolina, including the last time the topic dominated public debate in the mid-1980s. I was one of the lead reporters in the state covering that debate. Like Yogi Berra, I have déjà vu all over again.

Other stories will describe the geology of the Atlantic and why it might harbor fields of oil or natural gas. We’ll explain the politics of oil and the tortuous federal process in place to regulate offshore drilling. We’ll examine the possible benefits of drilling and its environmental consequences. Two reporters will travel the coast, from Calabash to Corolla, to record the views of ordinary people, and I’ll spend a week along America’s Oil Coast along the Gulf of Mexico to describe life amid the oil rigs, refineries and processing plants.