The Obama Administration did the expected yesterday and announced plans to potentially open portions of the Atlantic coast, including offshore North Carolina, to oil and natural gas drilling for the first time in almost three decades.

In keeping with Obama’s all-of-the above approach to energy development, the federal Bureau of Energy Management, or BOEM, yesterday released a draft five-year leasing plan that would begin in 2017 for offshore drilling. BOEM last week started the process to lease portions of federal waters off the N.C. coast for commercial wind energy.

The drilling plan includes all the federal waters 50 miles off the mid- and south-Atlantic coasts, from the mouth of the Chesapeake Bay to the Georgia-Florida border. Also included in the plan are areas in the central and western Gulf of Mexico and off the north coast of Alaska.

The announcement is one of the initial steps in a long federal permitting and review process for offshore leasing, exploration and finally production. That process for the Atlantic, where no wells exist, would likely take more than a decade to play out if it continues to move forward.

“The draft proposal prioritizes development in the Gulf of Mexico, which is rich in resources and has well-established infrastructure to support offshore oil and gas programs,” Sally Jewell, the secretary of the U.S. Department of the Interior, said in the press release announcing the plan. BOEM is an agency in her department. “We continue to consider oil and gas exploration in the Arctic and propose for further consideration a new area in the Atlantic Ocean, and we are committed to gathering the necessary science and information to develop resources the right way and in the right places. We look forward to continuing to hear from the public as we work to finalize the proposal.”

She can take that to the bank. Offshore drilling is a contentious issue in North Carolina and along much of the East Coast. The last leasing proposal off North Carolina, by Mobil Oil Corp. back in the mid-1980s, spawned years of debate and triggered permit challenges and lawsuits before Mobil dropped its plans. 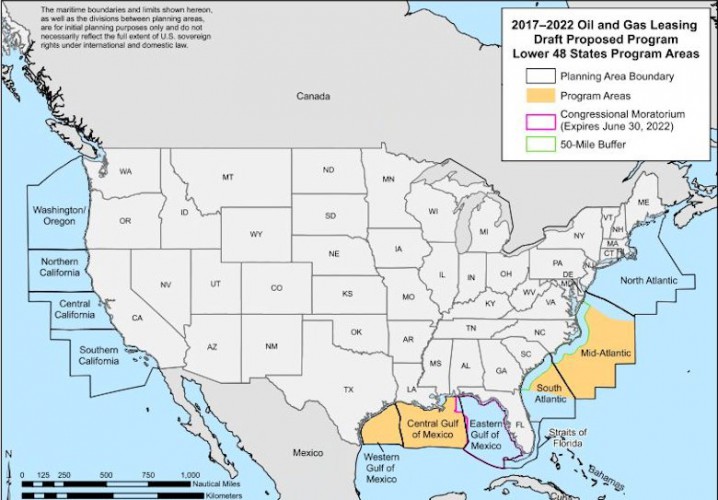 Reaction from around the state was swift yesterday.

“We’re disappointed that the administration plans to open up North Carolina’s coast to offshore drilling,” noted Dustin Chicurel-Bayard, communications director for the N.C. Sierra Club. “Drilling for fossil fuels off the North Carolina coast would contribute to the carbon emissions that are driving climate change. We owe it to our communities to invest in clean-energy solutions.”

The Southern Environmental Law Center stressed the risks to the state’s natural resources and coastal tourist-based economy. Sierra Weaver, a senior attorney, noted that Obama cancelled a planned lease sale off Virginia’s coast in May 2010 in the wake of the BP accident in the Gulf Mexico that spilled an estimated 130 million barrels of oil, causing unprecedented environmental damage.

“Risky drilling off our Southern coasts jeopardizes the communities, jobs and beloved beaches that are the very heart of our coastal states,” Weaver said. “As we’ve seen with the Exxon Valdez and BP disasters, a single oil spill can devastate a coast for years, threatening everything about why we choose to live, work and play on our Southern Atlantic coasts.”

But not all the reaction was negative. The state’s biggest oil cheerleader, Gov. Pat McCrory, welcomed the prospect of oil rigs off his state’s coast. He, along with the governors of neighboring South Carolina and Virginia, have been lobbying Obama to open up the Atlantic to drilling.

“I’d like to thank Secretary Jewell for taking a step in the right direction to help North Carolina become a significant energy-producing state,” McCrory said. “Responsible exploration and development of oil and gas reserves off our coast would create thousands of good paying jobs, spur activity in a host of associated industries, generate billions of dollars in tax revenue and move America closer to energy independence.”

Those jobs depend on how much oil or natural gas is out there. At the moment, that’s a matter of speculation. A BOEM study in 2012 estimated that 3.3 billion barrels of oil and 31.3 trillion cubic feet of gas might lie beneath the ocean along the Atlantic Seaboard. Those seem like big numbers, but they represent about 4 percent of the total estimated recoverable oil resources and 8 percent of the total estimated recoverable gas resources in federal waters. They pale beside the estimated oil reserves off the Arctic coast of Alaska.

But those estimates date from the 1970s and ’80s, and industry and other drilling supporters consider them too low. The Obama administration has approved seismic testing to get a better idea of how much oil and gas lie beneath the Atlantic. The testing could begin this spring.

Along with the proposed leasing plan, BOEM also announced its intent to prepare a draft Environmental Impact Statement, or EIS, for the leasing. The plan and the intent to do an EIS will be available for public comment for 60 days following the publication of the documents in the Federal Register.