WILMINGTON — The federal review of the possible environmental effects of a proposed terminal groin on Figure Eight Island is nearing completion, though an assessment of what the groin might do to endangered and threatened species has not yet been done. Delaying that assessment, groin critics charge, seems counter to federal law and regulations.

The Army Corps of Engineers in Wilmington expects to complete its environmental study of the Figure Eight groin next month, but hasn’t yet consulted with the U.S. Fish and Wildlife Service about the possible effects on sea turtles, birds and other animals on the federal endangered species list.

Such an assessment is required by federal law and should have been done concurrently with the environmental study, say critics, which includes the N.C. Coastal Federation.

“Rules and guidance issued by federal agencies say that formal coordination required by the Endangered Species Act should be completed prior to the issuance of a Final Environmental Impact Statement,” said Todd Miller, executive director of the federation.  “This only makes sense because you can’t determine the best alternative until all environmental impacts are fully vetted.”

N.C. beach communities trying to make the case that terminal groins are their best defense against shoreline erosion must ensure that their proposed projects will not jeopardize the existence of endangered and threatened species.

This “Section 7” review is named after the section of the federal the Endangered Species Act that requires federal agencies to determine whether permitted projects will adversely affect the habitat listed animals and plants need to survive and recover as a species. Without a Section 7 review, a permit to develop a terminal groins cannot be issued.

While studying the potential environmental effects of groin projects, the Corps must consult with the fish and wildlife service, which determines whether the proposed project may prevent the recovery of any listed species.

Federal agencies “in the early stages of project planning” have to consult with the service if a project “may affect” a listed species, according to the rules. This initial consultation is considered informal.

If the service determines a proposed project will not likely affect any listed species, the informal consultation is over and the project may move forward. If a project may affect a listed species then the wildlife agency may prepare a “biological assessment.”

If this assessment concludes a project “is likely to adversely affect” a listed species, a formal consultation is required.

This review will be critical in the permitting of terminal groin projects because inlets are nesting habitat for sea turtles and critical for foraging and nesting for shorebirds such as endangered and threatened piping plovers and red knots, a bird the service is currently proposing to list as threatened under the federal law.

Terminal groins are usually made of rock or steel and built perpendicular to shores at the end of islands near coastal inlets to control erosion. They were banned in this state for three decades until 2011.

The N.C. General Assembly’s controversial decision that year to allow up to four “test” terminal groins to be built along the coast has been followed by persistent criticism from environmental groups, which argue these walls will deplete natural habitat for shorebirds.

Four beach communities — Holden Beach, Ocean Isle Beach and the Village of Bald Head in Brunswick County and Figure Eight Island in New Hanover County — are in varying stages to obtain permits to build terminal groins. None has yet to receive federal or state permits.

Bald Head Island is the furthest along in the process. The village applied for a Coastal Area Management Act major permit Aug. 1, the same day the corps of engineers released its final Final Environmental Impact Statement on the proposed project. Village officials hope to receive a permit by September 30.

The fish and wildlife service issued a biological opinion of the village’s proposed terminal groin project under Section 7 on June 19. The 197-page document concludes that the proposed terminal groin on Bald Head Island “is not likely to jeopardize the continued existence” of the loggerhead sea turtle, green sea turtle, leatherback sea turtle, piping plover, red knot or seabeach amaranth, a threated annual plant found on the dunes of barrier island beaches along the Atlantic Ocean.

The biological opinion also states that the proposed project will not likely destroy or adversely modify critical habitat for nesting loggerhead sea turtles. Bald Head Island does not have a critical habitat designation for shorebirds.

Erosion has severely depleted the habitat for shorebirds and sea turtles at the mouth of the Cape Fear River where the village wants to proceed with the $18 million project. But the service is still requiring the village to monitor species during and after construction of the proposed groin.

“We felt like the engineering studies that were done that whatever impacts were going to happen on either side of the terminal groin were not going to jeopardize the existence of the species,” Matthews said. “That’s one reason why they’re being required to monitor quite a bit. We have recommended monitoring sea turtle nests for the life of the project. The bird monitoring is required for three full years past completion of both phases of the groin construction.”

After that time, the agency will determine whether to require additional monitoring. 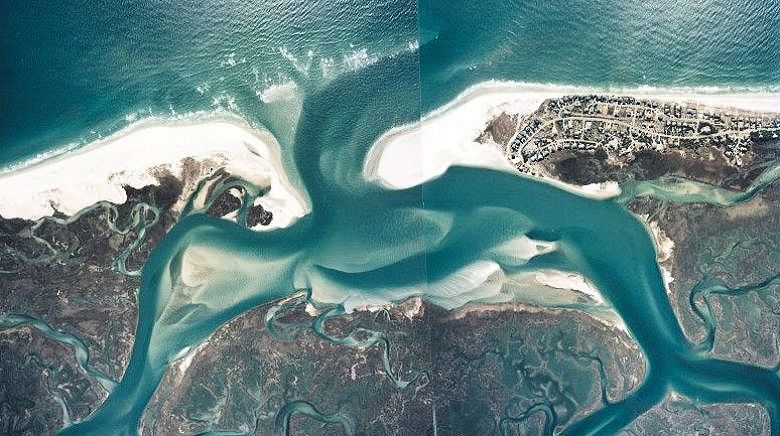 This photo of Rich Inlet taken a few years ago shows the sandbars, spits and islands that numerous bird species need to feed and nest. Photo: Army Corps of Engineers

Of the four inlets where terminal groins may be built, Rich Inlet at the north end of Figure Eight Island is, environmentalists say, particularly crucial to migratory shorebirds.

“We have lots of data from Rich Inlet that show how important it is to piping plover and lots of other shorebirds,” Golder said. “It’s one of the important hotspots in the state. The thing that Rich Inlet has is it’s a natural inlet. It doesn’t have hardened structures. It has the natural shoals and intertidal sands flats that these birds need. It’s one of the few inlets these birds have in the state.”

The north end of Figure Eight Island is also designated critical habitat for wintering piping plover.
“The species that is at most issue with these terminal groins is the piping plover,” said Derb Carter Jr., director of the Southern Environmental Law Center’s Chapel Hill office.

If the proposed 1,500-foot-long terminal groin is built on Figure Eight’s north end, about 60 acres of unspoiled beach that are critical habitat to shorebirds will eventually vanish, according to a projection made by the engineers hired by the Figure 8 Island Homeowners Association to design the proposed project.

In a July 25 letter to Figure Eight property owners rebutting information publicized by the federation, the association’s board of directors states that the modeling “assumed a worst-case scenario for inlet dynamics.”

“The groin may actually help protect nesting habitat,” according to the response. “For example, a piping plover nested in 2014 in an area that would be south of the proposed groin. This area has been below the high water mark on at least 2 occasions since the north end of Figure Eight has been developed. The groin would protect this area from being inundated in the future.”

Groins are referred to as a “threat” to piping plovers in a fish and wildlife service publication titled Comprehensive Conservation Strategy for the Piping Plover in its Coastal Migration and Wintering Range in the Continental United States” and in the proposed rule “Endangered and Threatened Wildlife and Plants; Proposed Threatened Status for the Rufa Red Knot.

Shorebirds that use Rich Inlet rely on the inlet’s natural movement back and forth for nesting and foraging.

“Any land behind a solid wall of sheet pilings and rocks would cease to be valuable for the species of birds that currently nest and forage there,” according to the federation’s response to the Figure Eight rebuttal. “That’s because, as has happened at numerous inlets along the nation’s coast, the area landward of the groin will increase in elevation and become vegetated and that is unsuitable for the types of shorebirds that depend on the bare, unvegetated sand for nesting habitat.”

A final EIS should not be issued without completing the required consultation under Section 7 according to a federal rule issued by the Council on Environmental Quality which establishes uniform standards for federal environmental impact statements. The corps released the draft EIS in May 2012.

The rule states that “to the fullest extent possible, agencies shall prepare draft environmental impact statements concurrently with and integrated with environmental impact analyses and related surveys and studies required by the Fish and Wildlife Coordination Act, the National Historic Preservation Act of 1966, the Endangered Species Act of 1973 and other environmental review laws and executive orders.”

Megan McLaurin, an independent legal researcher for the federation and Surfrider Foundation, said the legal argument can be made that fish and wildlife service’s biological assessment of terminal groin projects be made in coordination with the EIS process.

“The language of the law says that the biological assessment needs to be done at the earliest stage possible,” McLaurin said. “What is confusing here is that the Corps knows that and the Corps appears to be delaying on doing that. Why are they continuing to move forward without doing this analysis?”

The fish and wildlife service in a July 3, 2012, comment letter on the draft EIS for Figure Eight’s proposed project states that “Based on our concerns outlined above for potential impacts to trust resources, at this time the Service recommends denial of the DA [Department of Army] permit for the project as proposed.”

Matthews said she has not been given the opportunity to review Figure Eight’s latest proposal.

“The last information that I saw was just scoping information. At this point I’m not sure what they’re going to propose,” she said. “We will look at it with fresh eyes. Every project is different. This process is very project specific. It’s a difficult decision and we have to look at every project on its own merits. The fact that we’ve issued this biological opinion and I may not look anything like another project for a terminal groin it’s hopefully not seen as setting a precedence.”

Transportation design with resilience in mind goal of effort

State, FEMA approves millions to help flooded homeowners
Support the coastal news you value.CoastalReview.org is an award-winning, nonprofit news service providing unbiased, in-depth and investigative reporting about issues on the North Carolina coast. Your support makes our work possible. Please join the CRO Press Club or put your business in the Sponsor Spotlight to support the coverage your care about. Learn MoreGive or Sponsor