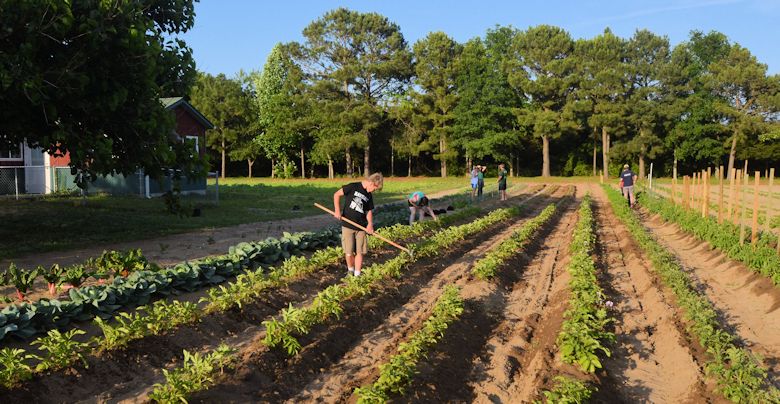 OCEAN – EarthWise, as it’s called, started with a seed — first planted in the imagination of an old man and then in the soil by his children.

The N.C. Coastal Federation’s small community farm that then sprouted is at the end of a dirt road, near Bogue Sound in Carteret County. People come down the road on Tuesday evenings to work the soil, hoe the weeds and collect the harvest, a wide variety of veggies and melons that everyone shares equally. Though the volunteers enjoy their buckets full of produce, the people will tell you there’s something more going on that brings them back to help.

“I enjoy working at the EarthWise farm because it gives me a chance to learn about different crops and ways to care for them, “ said Rachel Bisesi, an educator for the federation who lives on the farm property in the steel, evergreen and red barn. “It also gives me a genuine connection to the earth and reminds me of how much we depend on the environment every day.” 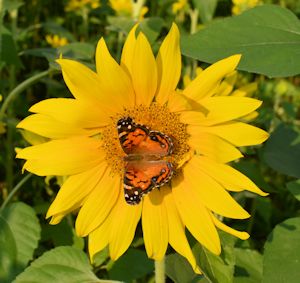 Watching kids come to appreciate the bounty that the earth provides may be her favorite part of all this. “I love watching how excited they get once they realize this one little seed they planted months ago is now something healthy and delicious to eat,” Bisesi said.

The connection people made with the earth to grow food wasn’t something the volunteers felt the need to express to each other while plucking peppers and pulling carrots. Though that was a common theme for their reasons to volunteer.

“I enjoy having some control over where my food comes from,” said Todd Miller, the executive director of the federation. “It’s always been something I get a lot of pleasure out of, being able to live off the land so to speak. Just the fact that you can acquire a lot of the food by either growing it or catching it is pretty neat these days.”

Miller and his family grew up next to the plot of the land by Bogue Sound, where they still live today. He can be found out on the farm just about every day.

“It gives you an appreciation that it’s not that easy to grow and it connects you to what it really takes to sustain people here,” Miller said.

EarthWise’s story began about 70 years ago with farmer named Ken Parker. He tilled all his acreage with a mule. He couldn’t afford a tractor or a fancy irrigation system. EarthWise also depends on the rain.

“It really was a much more sustainable way of doing agriculture at the time, in terms of the environment,” Miller said, who as a boy remembers Parker.

Parker sold some of his land to Miller’s father, Ted. At one point, portions of the land were leased to a large farmer who grew tobacco, corn, soy beans and cotton.

“It went from a very small almost garden operation to a big commercial farm,” Miller said.

For the most part though, the land remained untouched for many years until Ted Miller, in his 80s, returned to the family compound on Bogue Sound, after years traveling, to build EarthWise. Ted was a creative soul, a sailor at heart and a chemist by nature. He envisioned EarthWise as a place to practice what he had preached over the years about nutrition and health. He was critical of food additives and overly processed products and so sought to grow food from enriched soil without the use of pesticides or fertilizers. He also donated fresh produce to local charities.

There is a plaque on a stone at the head of the property honoring Ted and a sign on the farm shed that reads: “Fifty years ago, Ken Parker and his mule, Katie, effectively farmed this land to produce safe abundant foods. Now the goal is to restore this farm to its natural capabilities.”

For Cindy Miller, Ted’s daughter, working on EarthWise every week is about the nutrition for her family.

“To me it’s just thinking about what I’m going to do with [the produce] and how I’m going to feed my family,” Cindy said. “It’s making something out of it, just like making bread and kneading it and dreaming of how beautiful this product is going to be.”

Not only would Cindy bring her pickled farm-produce to share, but she would bake treats like zucchini pies for the children. She’s volunteered to put together an EarthWise recipe book.

And then for others, like Randy Mason of Emerald Isle, the reason to volunteer was quite simple: “I just like to see things grown.”
Mason is also a fan of the okra. “Yeah, okra. I love okra. Fried okra,” he said, carrying the “eye” sound in “fried” for just a few seconds longer.

Earthwise is an on-going experiment. “We had the opportunity to have the land as part of the federation, so we’ve been trying to explore good uses that help to advance the mission of the federation as well,” said Miller.

The nonprofit’s mission is to help people have an active role in the stewardship of North Carolina’s coastal water quality and natural resources. For this reason, EarthWise uses organic pesticide so that nothing harmful to the environment flows down the hill into Bogue Sound when it rains. Knowing that polluted stormwater runoff is the number one cause of degraded coastal water quality, the federation advocates for low-impact development and makes a point to lead by example.

As far as the experimentation goes, using the land as a community farm was never quite planned. Really it all happened organically.

The Miller family inherited the land from their father and decided to donate part of the property to the federation. “He wanted it to be used in a way that it would do some public good and sort of left it to the family how best that could be done,” Miller said.

A group of neighbors from the new development up the road reached out to Miller about helping with the farming in exchange for fresh veggies.

“We all met one day and talked about roles and responsibilities,” said Josh Honaker, one of the neighbors. “We set a date, and then we all met over here the first day [in March] when we were putting all the plants in.”

“The group worked together remarkably well,” Miller said. “There wasn’t any jealousy about anybody taking too much. I think everybody was very conscientious, trying to do their part and take what they deserve.”

The group said they enjoyed the comradery, and Mason hopes others will join. If there is genuine interest, Miller said, there’s more space to expand.

Of course, perhaps most of all, everybody enjoyed the fruits of the labor. It seemed of all the greens and vegetables and legumes and melons, most everyone had one favorite in common.

“Probably the tomatoes,” said Cindy. “I just like working with them.”

“Probably the tomatoes, fresh tomato on a sandwich. And the cucumbers,” Honaker said.

“I love garden tomatoes, peas and cucumbers, but there is something really special about garden tomatoes. They just don’t taste the same from a store. Long live the tomato sandwich.” Bisesi said.

And then there was Mason, “The okra baby, oh yeah without a doubt.”

For Honaker, who brings his toddler son, Josh Jr., and two girls, Madeline and Olivia, volunteering at EarthWise is also about the education of where food comes from.

“I like it just to get the kids out, just to teach them. Kids nowadays don’t really understand. Everybody is used to going to the store and just picking up your vegetables. Not too much goes on like it used to back in the day.” he said.