The story first appeared in the Outer Banks Voice but was updated to include this week’s developments.

Coastal residents and the rest of North Carolina are facing a tidal wave of pending insurance rate hikes.

There was some movement this week at the national level when the U.S. House of Representatives Tuesday evening passed a bill to curb some of the premium increases in the nation’s flood insurance program that have been causing “sticker shock” for property owners.

H.R. 3370, the Homeowner Flood Insurance Affordability Act, sponsored by Reps. Michael Grimm, R-N.Y., and Maxine Waters, D-Calif., passed 306-91 under a “suspension of the rules” requiring a two-thirds vote in favor. The measure reverses some of the changes to the National Flood Insurance Program introduced by the Biggert-Waters Flood Insurance Reform Act of 2012. 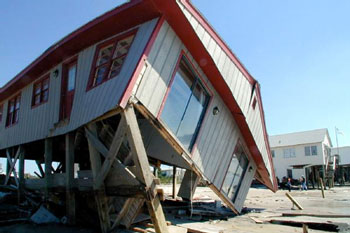 The Senate passed its version of flood insurance legislation, S. 1926, in January by a 67-32 vote. The Senate bill takes a broader swipe at the flood insurance program and delays most of the reforms and increases of the Biggert-Waters law for four years. Key senators, including Sen. Robert Menendez, D-N.J., the sponsor of the Senate version, said they would accept the House bill.

Premium increases are also in the offing at the state level. But coastal property owners could fare better than they will under the federal flood insurance plan if legislation introduced by state Rep. Paul Tine, D-Dare, and three others can clear the state Senate in this year’s “short session.”

Insurance rates have been skyrocketing since 2007. For instance, residents in coastal counties in 2009 saw their average property rate, which includes wind and hail coverage, increase an average of 29.8 percent along southeastern N.C. coast; 22 percent in Pamlico, Hyde and Currituck counties; and 6.5 percent in Beaufort, Washington and Dare counties. The state as a whole saw average increases of just over 4 percent.

Last year the industry sought rate hikes on homeowners insurance that ranged from a low of 1.2 percent to as much as 30 percent along the coast. Coastal residents decried those increases as excessive, unwarranted and unfair, especially since their rates already were significantly higher than the rest of the state. In the end the industry and Insurance Commissioner Wayne Goodwin compromised on a statewide rate increase of 7 percent, ranging from as little as 1 percent to as much as 19.8 percent in some beachfront areas. That increase became effective on July 1, 2013, so some homeowners have not received renewal notices reflecting it.

Then, in January, insurers came back to the state insurance board seeking a whopping 25 percent increase in premiums on a statewide average, with rates increasing by as much as 35 percent in coastal regions.

The succession of coastal rate increases has long irritated state lawmakers representing coastal communities over issues of equity and fairness.

Historically, raw dollar payouts for damage caused by hurricanes have been much higher inland than in coastal areas.

Insurers claim that while dollar payouts are higher inland, the premium load can be spread among more policyholders in densely populated urban areas.

Critics of the current system say politics is behind the widely disparate premiums inland; there are more voters in the rest of the state than there are in the 18 coastal counties that pay the highest rates.

In an interview, Tine explained the problems with the use of only a single model to predict future hurricane-related losses:

“Computer models attempt to predict future losses and have a bias based on which statistics they weigh more. By utilizing two models and comparing their results you get more accurate predictions,” he explained. “They would also have had to bring some other information that was recommended by a study done three years ago that was never implemented.

“Finally, for whatever rate is approved, they would have to show the hurricane load in every county. Right now, we can only see that load in the 18 (coastal) counties.”

Tine’s bill, by requiring more models and more disclosure on hurricane-loss loads across the entire state, is aimed at bringing more transparency to the rationale insurers use for premium increases.

Each filing by insurers would also require data “specific to North Carolina” and include “annual historic loss data by territory for 1987 and each subsequent year.”

North Carolina has 18 insurance territories, with the brunt of the rate increases borne by the five territories encompassing 20 counties east of I-95.

The bill would also require data to be broken out in each territory based on risk from wind and hail alone, and again by non-wind and hail losses.

Tine said the cumulative effects of the bill would provide better data to the N.C. Rate Bureau on which to base decisions while providing more transparency on whether each territory is paying its fair share.

The bill passed the state House last year 116-0. It was revised 15 times and as many as 11 interested groups were included in the process. The state Senate sent the bill to committee, where it was when the session ended.