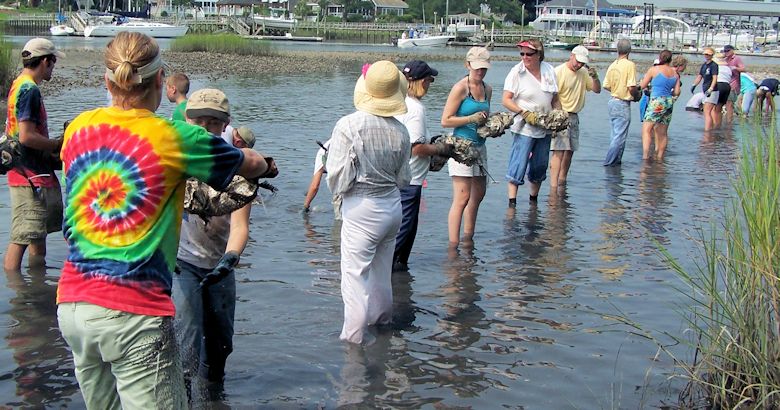 Volunteers form a human chain to build an oyster reef at Airlie Gardens in Wilmington.

“The life of man is of no greater importance to the universe than that of an oyster.”

SWANSBORO — David Hume of Scotland might well be the most important philosopher ever to write in English, but when he penned that line back in the 1700s in Dialogues Concerning Natural Religion, he unfairly dissed the oyster.

To make up for Hume’s insult – or maybe just to have fun, celebrate the tasty bivalve and raise some money – the N.C. Coastal Federation has scheduled a statewide Oyster “Shellebration” for March 1.

The event will take place in Raleigh, Swansboro, Hatteras and Wilmington and will offer participants a bit of everything, from food and drink to crafts, music and storytelling, documentaries and marsh cruises.

Already, even before ticket sales have begun, there’s talk in at least one location – Swansboro – of making it an annual event.

“We were talking about doing something statewide to bring some attention to the oyster, and one of our board members came up with the ‘Shellebration,’” said Sally Steele, the federation’s development director. “We liked it and decided to go with it.”

The word does sort of roll off the tongue; it’s so much fun to say that when the topic came up recently at a Swansboro Board of Commissioners’ meeting, folks kept repeating it.

But all fun aside, the oyster is far more important – at least to this part of the universe – than Hume intimated. It’s been important to the North Carolina economy since colonial days. It’s crucial to water quality, as each oyster filters pollutants out of 35 gallons of water each day. Its reefs are important habitat for other shellfish and fish, and the not-so-lowly bivalve is increasingly being used in sills, a natural alternative to the use of costly and often counterproductive bulkheads to limit shoreline erosion.

The federation has long recognized all of those oyster roles, according to Lexia Weaver, one of the group’s scientists, and has engaged thousands of volunteers in recent years to plant oyster shells in many locations along the coast.

One of the best examples is Jones Island, a part of Hammocks Beach State Park in the White Oak River near Swansboro. Volunteers have built several acres of oyster reefs around the island since 2007. On Beacon Island, near Ocracoke, 25 to 30 volunteers spent hours on Jan. 20 filling and planting countless bags of oyster shells in frigid waters.

And, Weaver said, the Trinity Center recently decided to work with the federation to build an oyster-and-marsh sill to protect its property from erosion. The center in Pine Knoll Shores is a retreat, summer camp and conference center owned by the Episcopal Diocese of East Carolina.

“They were going to do a bulkhead, but they consulted with us and they’re going with the sill,” Weaver said. “It will last longer and do a better job and contribute to water quality improvement.”

The oyster harvest in North Carolina was at its peak in about 1887. After that it steadily declined to a low of about 184,000 pounds harvested in 1994. A major part of the decline was dermo, a parasitic disease that kills oysters before they reach legal harvest size. That decimated stocks, reduced reproduction and harmed the reefs.

Eventually, concerted efforts, by the state and by organizations like the federation, began to create new reefs and restored some old ones to rejuvenate the population.

Of course the decline of dermo played a big role in the improvement. But Hardy gives a lot of credit to state shell-planting efforts and the division’s shell recycling program, as well as to smaller-scale efforts by groups like federation.

“Fishermen tell us these areas are productive,” he said. “We have annual meetings to get suggestions for where to plant shells, and they’re well attended. There’s a lot of interest.”

Even small-scale shell-planting projects, intended by home and business owners for shoreline stabilization, have an effect, because those shells become habitat for oyster spat, or larvae. And the more spat, the more oysters.

“This puts more resource out there for everyone,” Hardy said. “And of course there are the water quality benefits and the shoreline stabilization.”

So. We’ve established that the oyster and its shell are well worth celebrating, despite 19th century American industrialist and financier Andrew Carnegie’s impugning implication that the shell isn’t worth much (“The first man gets the oyster, the second man gets the shell,” he said).

Exactly how, when and where are we going do this partying?

In Swansboro, where the Shellebration is a joint effort of federation, the town’s Tourism Development Authority and its Parks and Recreation Department, things will actually kick off on Friday, Feb. 28 at 6:30 p.m. with a wine-tasting/seafood pairing at the White Oak River Bistro. You can make reservations by calling 910-326-1696.

The next day, things will roll into high gear from 11 a.m. to 5 p.m. with “progressive seafood tastings” at Bake, Bottle & Brew, Ice House Waterfront Restaurant, Saltwater Grill, Second Wind Eco Tours and Yoga, Trattoria of Swansboro and other fine restaurants.

Tickets will be $40 for federation members and $50 for nonmembers. They can be purchased on the federation web site, at the participating businesses and at Lovely’s Boutique. A marsh cruise aboard the Lady Swan, featuring stunning river and Intracoastal Waterway vistas, is included in the price. The 45-minute cruises will depart from the Main Street Dock at 12:30 p.m., 2 p.m. and 3:30 p.m.

Concurrently, “Habitats, Heroes, Hallelujah,” the federation documentary, will be showing each hour, on the hour, in the Swansboro Town Hall Assembly Room. There will be coastal crafts, educational exhibits, fish printing and seafood displays by the Swansboro Historical Association, Hammocks Beach State Park and the federation in Olde Towne Square on the waterfront.

Master coastal storyteller Rodney Kemp of Morehead City will spin his wonderful yarns there, from the Pug Pavilion from noon until 1 p.m. Kemp said he’s honored to have been asked to appear and plans to do “a little song-and-dance I call ‘Gentle on My Mind.’

“It’s about growing up in coastal North Carolina, Carteret County specifically, but it relates well to Onslow County, too,” Kemp added. “It’s humorous, but it’s also historical and a little inspirational.”

Folk/rock duo Honey & Jack — Angie Cooper of the local group Wild Honey and Jack Ketner of Scearce and Ketner — will be on the Pug stage from 1 p.m. until 4 p.m.

Brittany Shipp, director of the town recreation department, presented the idea to town commissioners during their regular meeting on Jan. 21.

“It’s going to be a great event and it’s a wonderful partnership,” she said. “I just wanted to let you know about it; there will be an increase in traffic.”

Commissioner Phil Keagy, a Swansboro native, agreed and asked if the Shellebration would be an annual event.

“I can’t say for the other locations, but we (the recreation department and the federation) have discussed it,” Shipp said.

The goal is not only to raise money for the federation, but also to bring additional business to Swansboro just before spring, and town commissioners quickly gave it their stamp of approval.

As of this writing, the Wilmington Shellebration is set for 4 p.m. to 6 p.m. at Tidal Creek Cooperative Food Market on Oleander Drive.

There will be an oyster roast, live music and fun activities for all.

Tickets for the Shellebration will include a traditional oyster roast, plus chili and cornbread, a silent auction, games and beverages. All proceeds will benefit the federation’s environmental education programs.

The event will be held outdoors, rain or shine. Tickets cost $35 for federation members and $45 for others. Memberships will be available. Tickets can be purchased by visiting the federation web site or by calling 910-509-2838.

In Raleigh, epicenter of the federation’s inland operations, the festivities will be 5 p.m. to 8 p.m. at Natty Greene’s Brewery at 505 W. Jones St.

The family-friendly oyster roast will feature fresh steamed oysters along with clam chowder and fried fish, all locally caught in North Carolina. Participants can wash it all down with complimentary sweet tea and lemonade, or, of course, with specially priced, locally crafted Natty Greene’s beer. Entertainment will be by bluegrass band Big Fat Gap, a Triangle favorite.

All guests will be entered to win a Liquid Logic sit-on-top kayak to be given away that evening. Additional raffle tickets may be purchased at the roast.

Tickets can be purchased on the federation web site or by visiting Natty Greene’s in Raleigh. The cost is $40 per person or $65 per family for federation members, $45 and $70 for non-members.

In Hatteras, not that far from the federation’s northern coastal office in Manteo, the event will be 2 p.m. to 5 p.m. at Oden’s Dock.

Those who attend will gather around the fire with for an old-fashioned oyster roast. There will be fresh, local oysters on hand, along with beer and non-alcoholic beverages. Live music will be by the local band Dragonfly.

This one’s a real bargain, with tickets available for $15. Get them at the group’s web site.

Weaver thinks many people, especially along the coast, have come to realize the importance of the oyster. But there’s still room to grow that knowledge, and the Shellebration is a good way to do it.

“When you explain to people all the good things that oysters do, they get it,” she said.

President Theodore Roosevelt is said to once have uttered: “Get action. Seize the moment. Man was never intended to become an oyster.”

But man was intended to eat them. So, attend the Shellebration of your choice. And to paraphrase Jonathan Swift, the 18th century Irish poet, essayist and cleric who wrote Gulliver’s Travels, thank “that bold man that first ate an oyster.”