OCRACOKE — Legend has it that Blackbeard buried his treasure on the island of Ocracoke, and every once in a while some enthusiastic believer goes treasure hunting for a stash of gold. He’s not likely to find buried gold, but there is most definitely treasure to be found on these barrier islands.

The beaches of our coast are often littered with interesting shells and other sea life, driftwood and odd flotsam– all gifts to the person who know what to look for.

The objects that litter the beaches of the Atlantic Ocean and Pamlico Sound are usually washed up by the tide and waves. They may come from a few feet out from the shore or from hundreds of miles away. They may be relatively new or thousands of years old. They may be naturally occurring, or include such man-made items as sea glass, pieces of old shipwrecks or even a note in a bottle, washed up on the beach from far away.

The best time to go beachcombing is at low tide, when the water has receded and the most of the beach is accessible. Use a tide chart, often found in local newspapers and bait and tackle shops, to learn when low tide is. The tides are lowest when there is a full or new moon. Early morning is also a good time to go, before other folks get out and pick up the prize shells. Shelling is especially good after a storm or hurricane, especially if the wind was blowing from the east.

Beaches along the Outer Banks offer the best beachcombing and shelling because long stretches of them are protected and they are closer to the Gulf Stream, that highway of water that flows along the Southeast coast. South of the Outer Banks shell collecting is fitful because the beaches are largely developed beaches and that the Gulf Stream is further offshore. If the Scotch bonnet is one of your target shells, as it is for many collectors, Portsmouth Island and Core Banks not to mention Ocracoke are your best bets for finding it.

Among the many kinds of shells, or mollusks, seen on the ocean beaches are calico scallops, lightening and channeled whelks, American cockles, Atlantic surf clams, and common jingle shells. Some of the favorite finds include moonshells, olive shells, American augers, and several species of wentletraps. Sawtooth pens, their shells so thin and fragile that you can almost see through them, can occasionally be found whole, and sometimes a stretch of beach will reveal dozens of tiny, colorful coquina shells. Scotch bonnets, the state shell of North Carolina, can often be found, and a lucky beachcomber might come across a prized emperor or queen helmet. Not too long ago one fortunate beachcomber found the paper-thin shell of a paper nautilus, a relative of the octopus, pushed by storm waves from its home in the deep sea.

Make sure that the shell you pick up is unoccupied before you take it home. Hermit crabs often use moonshells and whelk shells as mobile homes. They are not the kind that can be purchased in gift shops, and if you take them home they will soon die.

Most people search for perfect shells, but some of the most interesting ones are often battered and broken. Oyster shells come in all kinds of sizes, shapes and colors that may appeal to an artistic eye for use in jewelry-making or wind chimes. 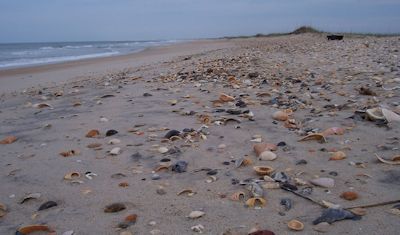 Also of interest are the remains of other sea creatures. The carapace, for example, of blue, calico, or horseshoe crabs or the egg cases of whelks or skates are always nice finds. Several kinds of sea stars, often called starfish, sometimes wash up on the beaches in multitudes after storms and can be dried for display.

The southern end of Ocracoke, known as “South Point” is a good place to find sand dollars, a kind of echinoid with a lovely five-petaled design which bleaches white when dry.  The lucky beachcomber might happen upon that rare find, a perfectly coiled and dried sea horse, carried ashore from the Gulf Stream.

Occasionally the remains of a sea turtle or a great whale will wash ashore. Fascinating as it is to see them, do not take them with you. It is against the law to possess parts form endangered species, and there is a stiff fine for having them in your possession.

The beaches at Portsmouth Island, part of the Cape Lookout National Seashore, provides especially good opportunities for shelling, as they are less often visited by beachcombers. To get to Portsmouth you have to take a boat ride from Ocracoke and walk to the beach, or you can take your 4-wheel-drive vehicle on a ferry from Atlantic and drive north along the ocean shore.  It is worth the trip, as people often return with bucketfuls of whelks and other desirable shells.

Jane Chestnut is one of Ocracoke’s most ardent shell collectors. A resident of the island for 15 years now, she began coming to Ocracoke when just a child, picking up shells and other items she found. She learned to love beachcombing with her grandmother and her mother, who often left their home in Rocky Mount to vacation at Atlantic Beach.

Jane and her husband often go shelling on the Ocracoke beach, and when possible take a boat to Portsmouth Island. Jane makes jewelry using her shell treasures and sells it at Ride the Wind Surf Shop, her and husband’s surf shop. Not only does she use the shells themselves, she uses molding compounds to make molds of the shells and fashions silver casts of the originals. She also uses the shells in other designs, including a spectacular glass covered coffee table, which contains intricate designs, all fashioned out of shells she has found. She makes mirrors bordered with scallop shells and Christmas ornaments from sand dollars and white scallop shells.

Some of Jane’s favorites include helmet shells, tulip shells, wentletraps and bittersweets. Once she found a real treasure, a dried sea horse, at the beach near the Pony Pens, and after one storm her husband found a 14-inch horse conch. Atlantic carrier shells, whose middles contain a gooey substance to which other bits of shell cling, are also some of her favorites.

The treasures that can be discovered walking the beaches of North Carolina’s Outer Banks are endless, but if you really want to enjoy them, take the time to learn the natural history of the creatures that left them behind. The Ocracoke Museum has on display an extensive shell collection, donated by Ruth Cochran’s family, with interesting bits of information about each mollusk. The N.C. Coastal Federation also has a shellfish collection on display at its headquarters in Ocean in Carteret County. Or you can read more about them in any of a number of books on Atlantic seashores. Behind each shell, each piece of flotsam, each skeletal remain, is a story, and these stories are the real treasures to be found on the beaches of Ocracoke and Portsmouth Islands.