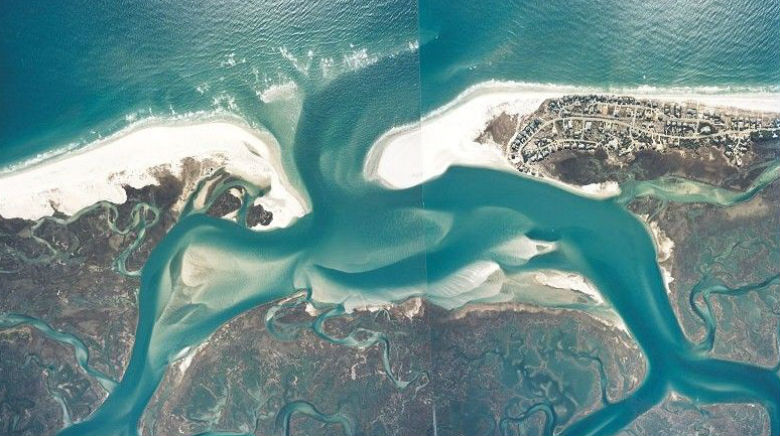 The shallow water and shifting sand bars of Rich Inlet provide habitat for animals and are a playground for people. Both would be threatened if Figure Eight Island, on the right, were to build a terminal groin. That’s Lea-Hutaff Island to the left of the inlet. Photo: Army Corps of Engineers

FIGURE EIGHT ISLAND – A dozen or so double-crested cormorants huddled on a sand bar in Rich Inlet, their backs to the brisk east wind.  Hunched over and their long necks pointed skyward, the birds held out their wings as if in prayerful supplication.

“They’re drying their wings,” Mike Giles informed the group as he guided the Jones Brothers’ skiff past the bar on a recent beautiful but breezy early spring day.

The boatload of gawking people slowly wending its way through the labyrinth of sand spits and bars startled a small flock of bufflehead ducks that were bobbing and diving in the water. These little sea ducks with the bulbous heads are common winter visitors along the N.C. coast, where they find shelter and food in the shallow estuaries and inlets. They will be gone soon, heading to the boreal forests of Canada and Alaska. There, the females will raise their young in borrowed tree cavities made by northern flickers. The flickers don’t seem to mind.

The little ducks took to the sky as one, flying low to the water and squawking at the intrusion.

A splash on the port side. Then another, followed by the inevitable oohs and aahs on the boat. Dolphins.  A small pod broke water not 20 feet away. Giles shifted the boat into neutral.  The dolphins swam around the drifting boat, some jumping several feet out of the water.

“Why do dolphins jump like that?” Giles asked the group.

Most were probably trying to come up with the scientific answer for leaping dolphin. No one could, though.

“Because they can,” Giles said.

Several dolphins came alongside, gliding just inches below the surface. The eyes of these undulating apparitions were clearing staring up at the boat. They saw a pod of humans staring back, most clicking away furiously with their cell phones.

People are also common inhabitants of the inlet, said Giles, a coastal advocate for the N.C. Coastal Federation who lives a few miles away up the Intracoastal Waterway. They come in flotillas of watercraft in the summertime to fish, to swim and to play on the inlet’s stunning array of islands and bars.

“There might be 200 to 300 boats lining that shoreline,” Giles said, sweeping an arm toward Lea-Hutaff Island. Much of the uninhabited island is a protected bird sanctuary.

“They’ll meet with friends and neighbors and barbecue on the beach. They’ll sit in chairs to sunbathe and read. The kids play in the water. It’s a social happening,” Giles said, as we approached our ultimate destination. “And it may all be gone.”

The bow of boat bumped gently onto the beach of Figure Eight Island, and the boat’s passengers piled out. Lindsay Addison, a biologist for Audubon North Carolina, was right behind. She beached her boat and its passengers followed the others up the beach.

The 15 people gathered in a circle on the north end of the island. The wide beach was deserted.  Off in the distance, beyond the rise of low sand dunes, loomed some of large houses that make up this exclusive, private island.

Those houses were the real reasons these people had come. Audubon, the federation and the N.C. Sierra Club sponsored the trip here to show what might be lost in order to save a handful of them.

About a dozen of Figure Eight’s houses are said to be threatened by erosion.  To protect them, the island’s homeowners association wants to build a 1,600-foot-long wall of rock and sheet metal that would encase the north end of the island and extend into the Atlantic Ocean.

This small jetty, called a terminal groin, would be built not too far from where the people were standing.  If it were already there, these people would be swimming.

Until 2011, such things used to be illegal on the beaches of North Carolina because of their demonstrated abilities to protect private houses while destroying public beaches. After intense and prolonged lobbying by some Figure Eight property owners and others, the N.C. General Assembly changed the law to allow four terminal groins on the coast. Figure Eight’s project is currently undergoing environmental review.

Addison has been fighting for birds all of her career. She’s heard proponents of one type of beachfront construction project or another brush off her concerns by noting that the threatened birds could go somewhere else.

“We’ve been telling birds to go someplace else for years,” Addison told the group. “This is someplace else. There’s not a lot of good bird habitat left along the East Coast. They can’t lose much more.”

As if on cue, a piping plover was seen pecking along the wet sand of the falling tide. The sparrow-sized bird nests and feeds only on sandy and gravel beaches in North America. Hunted for its plumage, the plover’s population plummeted in the early 20th century. A federal law in 1918 stemmed the widespread killing and the birds’ population started to recover only to have its habitat later destroyed by beachfront development. It is now an endangered species on both the federal and state lists.

A dozen pairs of eyes watched through binoculars or sighting scopes as the plover went about its daily routine of feeding itself.

Some in the group broke off to wander up the beach to look at the huge sand bags that protect some of the houses or to stand between the metal and plastic poles that mark the jetty’s prospective path to the ocean.

If the rock and sheet metal wall is built, this end of the island will be gone, Giles said. “This will be open water,” he said. “No more piping plovers, no more Sunday outings to walk the beach with the kids.”

The jetty will also likely change the dynamics of the inlet itself. The sand bars and spits that are the favorite haunts of praying cormorants and splashing children will likely disappear as well.

“These shallow inlets are very special places,” Giles said on the trip back to the mainland. “They are wonderful habitat for animals and a great place to come and sit and enjoy the beauty of our coast. They should be protected, not destroyed.”